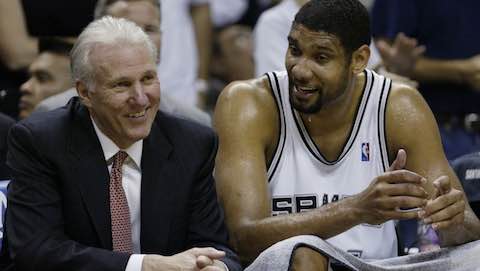 San Antonio Spurs legend Tim Duncan's retirement leaves behind a legacy that expands far beyond what he did on the court.

He was drafted No. 1 overall in 1997 and played 19 seasons for the same organization. He won five NBA titles, his first and last an astonishing 15 years apart. He won Rookie of the Year, two MVP awards and three Finals MVPs. He's widely considered the greatest power forward of all time, even though he played the latter half of his career almost entirely at center.

Tim Duncan, the face of the San Antonio Spurs dynasty, opted to retire and leave approximately $6.3 million on the table.

By announcing his retirement during the doldrums of the offseason, without a clichéd farewell letter posted to The Players' Tribune, Duncan retires much like how he decided to play -- with an unassuming demeanor that always put the team ahead of himself.

Make no mistake, Tim Duncan could have absolutely continued playing at a high level at age 40. His defensive box plus-minus of 4.97 at age 39 was not only the best on the Spurs by a wide margin, but it also led the league.

But with San Antonio landing free-agent prize LaMarcus Aldridge last offseason and signing veteran big man Pau Gasol to a two-year, $30 million deal this summer (the second year is a player option), perhaps Duncan felt it was time to say goodbye in part because the franchise has capable bigs ready to take the reins.

No surprise, Duncan will also end his career as the Spurs' all-time leading scorer. Even when counting years played in the ABA for guys like George Gervin and James Silas, Timmy D maintains a comfortable lead atop the franchise leaderboard.

Moreover, Duncan ranks No. 5 all time in blocks and No. 6 all time in rebounds. He's a shoo-in for the Hall of Fame, and is arguably a top-five player in league history.

In true Duncan fashion, there will be no grandiose farewell tour filled with parting gifts. Instead, Duncan will call it quits as quietly as his soft-spoken voice answering questions in a postgame press conference.

It's difficult to quantify what Duncan meant to not only the game of basketball, but also to the Spurs. Former teammate Bruce Bowen weighed in thusly, per the Houston Chronicle's Jonathan Feigen.

Bruce Bowen naturally offered interesting insight on ESPN. But 1st thing he said of what Duncan meant to Spurs nailed it. Said "Everything."

That's what Duncan meant to the San Antonio Spurs.

His immense talents on the court drove a dynasty that won five championships. His approach off the court, however, created the culture head coach Gregg Popovich and general manager R.C. Buford were striving to achieve.

Even tho I knew it was coming, I'm still moved by the news. What a HUGE honor to have played with him for 14 seasons! #ThankYouTD

Duncan's illustrious career is over, but the impact he had on the organization will live on through Kawhi Leonard and other stars who buy in to "The Spurs Way."