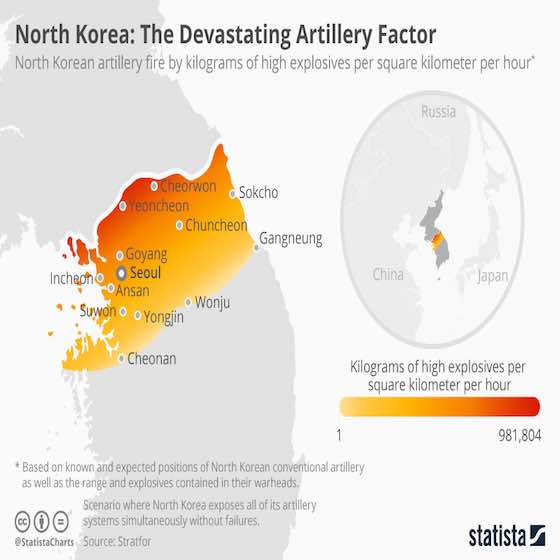 The following infographic is based on research conducted by Stratfor and it shows just how concentrated North Korean artillery fire could be in any armed conflict on the Korean Peninsula.

A recent poll found that a majority of Americans support military action against North Korea for the first time. If diplomatic efforts fail, there is no doubt that the United States has the capabilities to successfully strike Pyongyang's nuclear infrastructure. However, retaliation by North Korea is highly likely and even though this could come from one of the regime's intercontinental ballistic missiles, the country's conventional artillery is extremely powerful and also presents a major threat.

Even though much of the North Korean military is made up of antiquated Cold War-era Soviet equipment, the North Korean People's Army Artillery Command has approximately 12,000 pieces of tube artillery and another 2,300 multiple launch rocket systems. Some of these systems are capable of striking Seoul, though it is believed the city's northern outskirts would primarily come under fire in the event of hostilities. Some studies have predicted the South Korean capital's annihilation in the event of war, though it is more likely some of its districts would be heavily damaged with significant civilian casualties.

North Korea's initial choice of targets would prove vital in any conflict. The regime could choose to strike military targets across the DMZ or inflict a hammer blow on South Korea through mass civilian casualties and economic damage. The latter strategy would leave the north's artillery assets vulnerable to U.S. and South Korean counter barrages or air strikes.

The infographic is based on research conducted by Stratfor and it shows just how concentrated North Korean artillery fire could be in any new conflict on the peninsula. The scenario takes into account known and expected positions of North Korean artillery batteries and it is based on a situation where all of the north's systems are exposed at the same time without failures. The area close to the border could be saturated by North Korean shells while parts of Seoul and the airport at Incheon would also fall within the range of some of Pyongyang's systems.

The Yeonpyeong Island attack in 2010 demonstrated the danger posed by the north's artillery. In that incident, North Korean shells struck a South Korean island, killing four people and wounding another 19. If the U.S. decides to attack Pyongyang's nuclear facilities, the regime's artillery force will always ensure it has a devastating retaliatory card to play in any war.