Nigerian Military Conduct Should Be of Serious International Concern 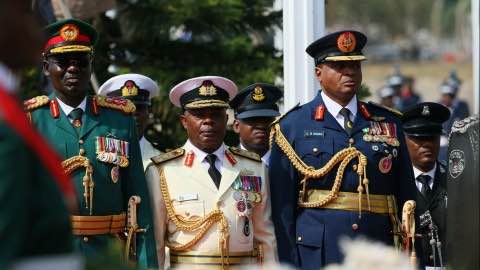 Since the colonial period, it has been the army, not the police, that successive military and civilian governments have used to maintain order. With little or no training in police work, the Nigerian army's response too often has been rough, if not brutal.

The New York Times, along with the Washington Post and the Wall Street Journal, is probably the most influential newspaper in the United States among those who follow foreign affairs. On December 18, the Times ran a full-page story with three photographs on the Nigerian army's killing of peaceful Shiite protesters in the outskirts of Abuja, the national capital, at the end of October. The Times reported the Nigerian army's efforts to portray the Shiite protesters as violent and posing a threat to Nigerian soldiers. At the time, army spokesmen defended their deadly response as being what President Donald Trump had told American soldiers to do in similar circumstances (in reference to the migrant caravan then approaching the southern U.S. border), and they grossly underreported the number of those killed by army fire. The Times' conclusion is based largely on a close analysis of a video made at the time and interviews of witnesses. It shows soldiers indiscriminately shooting into crowds trying to flee. An army spokesman, who said he had not seen the video, said that it had probably been "stage managed" to discredit the soldiers.

On December 14, the army suspended the operations of the UN International Children's Emergency Fund (UNICEF) in areas where the Islamist jihadist Boko Haram is most active (and where the situation is most dire). The army accused UNICEF of "spying" for Boko Haram; the charge apparently was based on UNICEF training material on spotting human rights abuses by the military; the army rescinded the ban shortly thereafter.

On December 17, the army called on Amnesty International to shut down its operations in Nigeria. Amnesty had just issued a report that, since 2016, 3,641 people had been killed in violence characterized by conflict between farmers and herders in Nigeria's Middle Belt. The army has claimed that Amnesty is attempting to destabilize the country with its "fictitious claims."

Since the colonial period, it has been the army, not the police, that successive military and civilian governments have used to maintain order. With little or no training in police work, the army's response too often has been rough, if not brutal. Army personnel have only rarely been held accountable, and seem immune from international pressure, whether applied by human rights organizations or foreign governments.

The two leading candidates are Muhammadu Buhari, the incumbent president, and Atiku Abubakar, a former vice president. Buhari, himself a former general and military head of state, has largely followed a hands-off policy with respect to reports of military abuses, and his opponent has largely been silent. When Buhari was elected president in 2015, his platform included, among other things, defeating Boko Haram and restoring security throughout the country. Despite some significant initial progress against Boko Haram, the group is now intensifying its operations. Furthermore, the conflict between farmers and herders is escalating, and a wave of kidnappings is sweeping throughout the country, prompting many Nigerians to feel more insecure.

Security is a major electoral liability for Buhari's reelection. Army propaganda relating to Shiite protesters and attacks on highly respected human rights organizations might therefore be politically motivated. However, election season or not, Shiites are widely distrusted by the Sunni Muslim majority, while the political class, especially in areas far away from conflict, are still willing to defend the army and generally deeply resent criticism of Nigerian human rights by international organizations and foreign governments. So, it is by no means certain that this latest round of press coverage on army human rights abuses and army attacks on NGOs will translate into votes for opposition candidates.

Africa - "Nigerian Military Conduct Should Be of Serious International Concern"