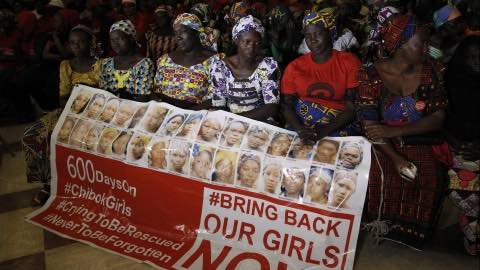 Across the country, Nigerians have seen an uptick in violent, ostensibly non-political, crime. Further, there is anecdotal evidence that crime has become more gratuitously violent.

Nigerians are especially concerned about the upsurge in kidnapping, which affects an increasingly wide spectrum of the Nigerian population. In the past, kidnapping mostly occurred in the south and west of the country, but now, it has become national epidemic.

In some parts of Nigeria, kidnapping has become a business, with whispers of involvement by politicians and the police as well as entrepreneurs in it simply for the money. In the northeast and in the Delta, kidnapping has been used as a political weapon by dissidents. Boko Haram, for example, made headlines in April 2014 when it kidnapped 276 schoolgirls in Chibok, over one hundred of whom remain captive.

Kidnappers had usually focused their attention on the rich and famous.

Hours before the final group stage game in the 2018 World Cup, Mikel John Obi, the Nigerian national team's captain, was informed that his father had been kidnapped and there was a ransom demand. Foreigners are prime targets, and have been targeted by pirates in the Gulf of Guinea, by militants in the oil patch, and by "common criminals" everywhere. But now, almost anybody who appears to have the most minimal of resources, or access to resources, can be a victim. A demoralized psyche has gripped the country, with many Nigerians living in fear of being kidnapped.

The police are constitutionally responsible for fighting domestic crime, including kidnapping, and the current crime wave with kidnapping undermines confidence in the government's law enforcement capacity.

Thus far, neither of the two leading candidates, President Muhammadu Buhari and contender and former Vice President Atiku Abubakar, has advanced substantial ideas to address what has become a ubiquitous crisis of governance. Instead, in the current presidential campaign, issue-drive debates have predominately focused on the economy. Yet, it goes without saying that without an effective security apparatus that can quash the kidnapping epidemic, economic development becomes exponentially more difficult.

Photo: Parents of the Chibok girls hold a "Bring Back Our Girls" banner during their meeting with Nigeria's President Muhammadu Buhari at the presidential villa in Abuja, Nigeria.