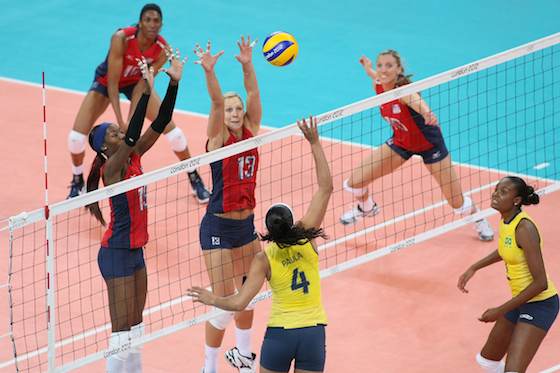 The 2012 Olympic Games women's volleyball gold-medal match has some striking similarities to the Beijing Games four years ago as the top two teams in the world -- United States and Brazil -- meet once again for the title in London on Saturday at 6:30 p.m. local time (10:30 a.m. PT).

Brazil won the Beijing gold-medal meeting four years ago in four sets as the top seed and favorite to win, while the U.S. entered the Olympics as a dark horse to win a medal. Brazil won its first-ever Olympic gold in 2008, while the United States walked away one win from its first Olympic gold medal with its second silver and third overall medal.

The U.S. advanced to the semifinals with a sweep over NORCECA rival Dominican Republic in the quarterfinal round without its starting setter in Lindsey Berg (Honolulu), who came back in the semifinals to help the Americans claim a 3-0 win over Korea to reach the title match. She helped set the Americans to an amazing 52.6 kill percent and .400 hitting efficiency in the win over Korea.

"I thought (Lindsey) did a great job tonight," McCutcheon said. "We were very happy with her performance. Of course there were doubts (on whether she would play). She was hurt. We will evaluate tonight and see how she looks and maybe even see how she is tomorrow. She ran around a little last night and it looked promising. We chatted late last night and early this morning and things seemed to be on plan so we decided to go with it."

"I feel amazing," Berg said after the match. "My team helped me out a lot and I didn't have to run around. I feel way better than I expected. I am just going to give it my all. If I can't walk after Saturday's match, I really don't care. It's game time and I feel great. I am so excited for Saturday." 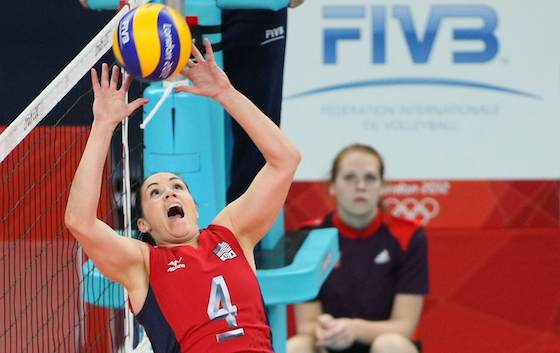 Meanwhile, Brazil's path to the gold medal in 2012 has been a roller coaster. In addition to its loss to the United States on the second day of pool play, the South Americans lost to Korea in straight sets and were pushed to five sets against Turkey and China before winning. On the final day of pool play, Brazil was on the verge of not making it out of pool play. However, Team USA defeated Turkey to end group play and Brazil took care of business against Serbia to claim the last spot out of Pool B to reach the quarterfinals with a 3-2 record. Once in the playoffs, Brazil lost the first two sets to Pool A winner Russia and fought off six match points in the fifth set before winning an exhausting 21-19 tiebreaker to advance to the semifinals in which they captured a straight set win over Japan.

"When we lost against USA and Korea and were almost knocked out, I felt like it was an embarrassment to our country," Brazil head coach Jose Guimaraes said. "I think we really hit the bottom against Korea. That had to happen so that we would start helping ourselves. There's nothing worse than Brazil losing and having ended in between ninth and 12th (place)."

"As a team we played well and improved from the first match (against Korea)," Tom said immediately after Team USA's preliminary match with its South American rival. "Brazil is good technically and is fiery, so when they got ahead it was hard to catch up."

In the preliminary round match, Team USA's attacks kept Brazil off balance.

"We suffered a lot with the USA's spikes," Guimaraes said. "We now need to defend against them like we defended here (Thursday versus Japan) and then we will see."

"We need to have a better match against USA compared to the first one (in the preliminary round)," Thaisa said. "We know that we can do better in attack. It is going to be a very tough match, but if everybody plays well, everything is going to be fine. I think that USA thinks that we are much stronger and we are improving."

With the U.S. Olympic Women's Volleyball Team one win away from its first-ever gold in the Olympics or any other major season-ending tournament such as the FIVB World Championship or World Cup, thoughts are staying in the present -- not what has happened or what could happen.

"I don't want to think about it -- we have a lot of business left to take care of," Berg said in regards to winning an Olympic Games gold medal. "I saw Misty (May-Treanor) and Kerri (Walsh) win (on Aug. 8) the beach volleyball gold medal, and saw all the emotion and hard work they put in to win."

"As far as pressure, the athletes hold themselves to a high standard in training every day," U.S. Olympic Women's Volleyball Team Head Coach Hugh McCutcheon (Christchurch, New Zealand) said. "As far as others' expectations, that is just noise. That certainly is not our problem. Our problem is finding a way to beat who is on the other side of the net. The notion of pressure comes more from outside looking in as opposed to being inside. We have been through big situations. Our whole preparation is trying to be the best we can be on Saturday for the gold-medal match."

McCutcheon, who led the U.S. Men to the 2008 Olympic Games gold medal before switching over to the women's side, is attempting to become the second coach to lead both genders to an Olympic Games gold medal. Guimaraes also led Brazil men to Olympic gold in 1992 Olympics and Brazil women to Olympic gold in 2008 Olympics. However, McCutcheon deflects the reason behind his squad's success thus far in in the current quadrennial.

"I don't think I am the difference -- I think the team is the difference," McCutcheon said. "I am just happy I have had the privilege to work with them and maybe help them out on one or two things along the way. The biggest thing is this group of athletes and their quest or journey to try to win Olympic gold. The fact I was there the last time (with the U.S. Men) and I happen to be here this time is not the main part of it. I think the main part of it is this group of special athletes, all 12 of them, the way they have worked together, they way they have fought, played for each other and their country. Hopefully they get a chance to win gold."

As McCutcheon said, the dream journey to Olympic gold runs deep through the team, which it will take to reach that goal.

"I hope we get there, but it is going to be a battle," Berg said. "We are expecting nothing less than a battle (with Brazil). I try not to get ahead of myself. This team has been so amazing to be on and we have been so successful that it is hard not to imagine (winning gold) because I believe this team is a gold-medal team. We believe it, but we know what it takes and we know that we have to work hard. Of course I dreamt it and it was an incredible dream, but I am trying to make it a reality."

"We need to focus on each other and don't worry about little things," Hooker said. "The team has got what it takes to win. Hopefully, we will come out on top."

"It's been an amazing experience, I've been dreaming about it for a long time," U.S. middle blocker Foluke Akinradewo (Plantation, Fla.) said about reaching the Olympic Games title match. "As long as we play our game, we should be okay. We need to reduce our errors. We have been playing good volleyball and relying on each other. We work well as a team and we should be ready for the final."

"We've worked four years for the gold medal match," U.S. middle blocker Christa Harmotto (Hopewell Township, Pa.) said. "We still go in with the same approach. We play together and it's important to continue that process."

Team USA's offense has been paced by three first-time Olympians in Hooker, Akinradewo and Larson. Hooker, who has become a dynamic and terminating opposite, leads the U.S. offense at the Olympics with 147 points on 123 kills, 21 blocks and three aces for second place in Best Scorer. Hooker leads all players in Best Spiker with a .389 hitting efficiency (123-23-257) and is tied for second in Best Blocker with a 0.91 average.

Nicole Davis (Stockton, Calif.), the starting libero, ranks fourth in Best Digger with a 3.83 dig average, while Tom averages 2.61 digs for 11th place. Davis also ranks third in Best Libero with an average of 7.87 digs and excellent receptions that includes a 74.4 excellent reception percent for fifth place in Best Receiver. Berg, despite missing the quarterfinal round, still ranks fourth in Best Setter with a 9.91 running set average.

As a team, the U.S. holds a 2012 Olympic Games leading .347 hitting efficiency, while Brazil is second with a .325 hitting efficiency. The Americans also lead all squads in blocking with a 3.35 block average, while Brazil is third with a 2.96 block average. Brazil leads the tournament in team reception with a 76.0 excellent reception percent while the U.S. is fifth with a 70.5 excellent reception percent.

Individually, Brazil is led by Sheilla Castro's 125 point, which is fourth best in the Olympics. Thaisa Menezes has added 103 points for seventh place and Fabiana Claudino has charted 81 points for 13th place. Thaisa and Fabiana are ranked fourth and fifth, respectively in Best Blocker at 0.86 and 0.82 per set. Sheilla ranks first in Best Server with a 0.36 ace average (10 aces total). Fernanda Rodrigues holds a 81.3 percent on reception for the lead in Best Receiver.