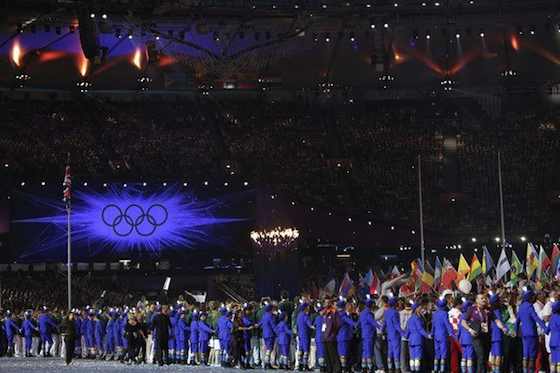 [ Stunning Pictures from the Closing Ceremony ]

The closing ceremony of the London Olympics has made NBC a big ratings winner, with 31 million viewers watching nationally as curtains go down on the quadrennial sports event.

During Sunday's prime-time, NBC averaged 26.9 million viewers while CBS only had 4.7 million, ABC with 3.5 million and Fox with 2.8 million. Only CBS' "60 Minutes" provided the biggest competition with six million viewers.

With British music icons like The Who, George Michael, Pet Shop Boys, One Direction and Spice Girls performing, the closing ceremony was the most-watched closing for a non-US Summer Olympics in 36 years.

Over 17 nights, NBC averaged 31.1 million in prime time. NBC said that made the London Olympics the most-watched non-U.S. Summer Olympics since the 1976 Montreal Olympics.

NBC said 219.4 million Americans had watched the London Games across the networks of NBCUniversal, making it the most-watched event in U.S. TV history, eclipsing the record previously held by the 2008 Beijing Olympics with 215 million viewers.

Earlier, NBC Sports Group Chairman Mark Lazarus said the network might break even financially due to strong response from viewers and advertisers. In the past, the network suffered huge losses due to expensive cost of coverage.

The ratings of NBC's news shows "Today" and "Nightly News" also soared during the Olympics, posting enormous margins over their main rival, ABC.

In the second week of the Games, "Today" widened its advantage over "Good Morning America" to 1.6 million viewers and sent "GMA' to its lowest numbers in a year.