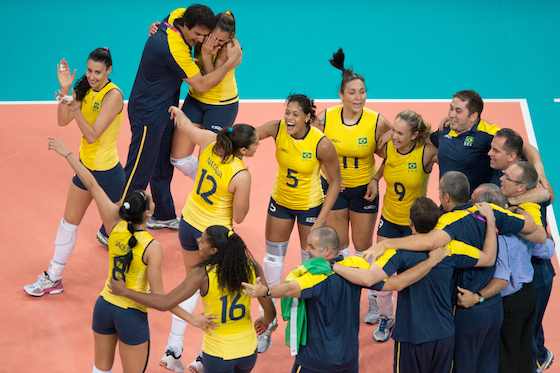 After the setback they had suffered in the opening set that ended for Brazil with the worst score ever since the introduction of the rally point system, only a few were keen to pick out the 2008 Olympic champions as the eventual winners of the gold medal at Earls Court. However, they eventually stormed back stepping up their quality and intensity to finally stop the American scoring machine and earned a well-deserved 3-1 win (11-25, 25-17, 25-20, and 25-17) to strike gold.

Jaqueline Carvalho played her best game in London right by the moment it counted the most, totalling 18 points at the end of the match, with three more -- Sheilla Castro, Fabiana Claudino and Fernanda Rodrigues -- finishing in double figures.

The American offense got somehow stuck after a brilliant first set with their best attacker, Destinee Hooker, being controlled by the Brazilian block and ending up by chipping in with 14 points.

With Team USA settling for their third silver medal at the Olympics, this result expands Brazil's medal collection to four, with two gold and two bronze medals included in their unique showcase. Brazil joins the Soviet Union (1968 and 1972) and Cuba (that actually got three through 1992-2000) as the only teams to win back-to-back Gold Medals in Women's Volleyball.

In a rematch of the 2008 Beijing Olympics final, Team USA rushed to a terrific start (5-1) to assert their intention to go for their first Olympic gold in history, something that would cap a couple of memorable seasons where the current leaders of the world ranking had regularly imposed their rule in all major international competitions. After an early time-out asked by Brazilian coach Zé Roberto, Team USA still comfortably set the pace of the game (8-3) with the same authority they had been displaying since the start of their Olympic campaign. After missing the quarterfinal against the Dominican Republic, American setter and captain Lindsey Berg was there to marshal her side with great confidence and with the Brazilian spikers that were lacking accuracy, Team USA easily and quickly raised the score up to a massive 13-5 lead.

The 2008 Olympic champions and their outstanding opposite Sheilla Castro just could not find a way to stop the run of that express as everything worked just perfectly on the US American side of the net, while the ladies in yellow jerseys looked confused and helpless. As Sheilla spiked once more off the court, USA stretched their lead to 10 points (17-7) and Zé Roberto had no other option than to try out some substitutions, with Paula Pequeno -- one of the heroines from Beijing -- joining the game. Showing determination, focus and great skills, the US Americans did not concede any chance to their opponents -- Brazil being the sole side, together with Korea, able to take at least one set from the winners of the 2012 FIVB World Grand Prix in the tournament -- and the opening set was quickly sealed by Jordan Larson with the pretty embarrassing score of 25-11, the worst ever for Brazil in any FIVB event since the introduction of the rally point system.

American flags were being waved almost everywhere at Earls Court after such a fabulous display of strength and quality and the fans looked confident their heroines could finally improve on the silver medals claimed in 1984 and 2008, so far the best result for the USA in women's volleyball at the Olympics. Even though the match was one-sided, the audience was really ecstatic as Olympic gold was at stake at the end of two weeks packed with classy actions whereby the UK had finally discovered volleyball at its best.

Brazil finally got back on track by scoring three points in a row to open the second set and create an atmosphere that was just "wild". Berg showed great composure to feed her spikers and supported by their always sensational block-defence system, USA could quickly draw level at 3 all.

However, Brazil claimed the next three to force USA coach Hugh McCutcheon to take his first time-out of the match and his players responded quite well, but still Brazil did control the operations by the first mandatory stop (8-5) and kept on rolling moving up 11-6.
As they got back their initial efficiency in reception, USA started clawing back, doing so quite vigorously (11-9), and with a block on Sheilla and a spike by Logan Tom they ultimately could tie the score. The game had finally moved to the quality and intensity of an Olympic final, and Brazil picked out from their repertoire some real fine shots to re-open the gap to 6 points (18-12). Jaqueline Carvalho was leading Brazil's offense but middle blockers Thaisa Menezes and Fabiana Claudino were also doing their job accurately. As they had finally got into their own rhythm, the 2008 Olympic champions were no more to stop, and at the end they substantially reversed the outcome of the first set, cashing their second set ball for a 25-17 whereby the final was set to re-start from "tabula rasa" in set 3.

Galvanized by their loud fans, Brazil extended that momentum also to the early phases of the third set (6-2, 8-5); in what could have been the last match of her competitive career, as she had announced she may retire after the Olympics, Lindsey Berg was looking for the right solutions to stop the Brazilian march but Sheilla, Jaqueline and Fernanda Rodrigues scored relentlessly to turn a match that had started so well in a mountain to climb for the USA (14-9). Like a diesel engine, and similarly to what they had done throughout the tournament, the South Americans gradually stepped up in all fundamentals but the USA were certainly not keen to let it drift away without fighting up to the end. McCutcheon made some changes with 39-year old Danielle Scott-Arruda -- the oldest player in the Olympic tournament -- being given some playing time but still Brazil set the pace (20-16) as Jaqueline was playing her best game of the Olympics thereby emulating the performance of husband Murilo Endres in the men's semi-final with Italy. A service error by Tamari Miyashiro brought four set balls to the count of Brazil with Sheilla pocketing the first chance to move her side 2-1 up. 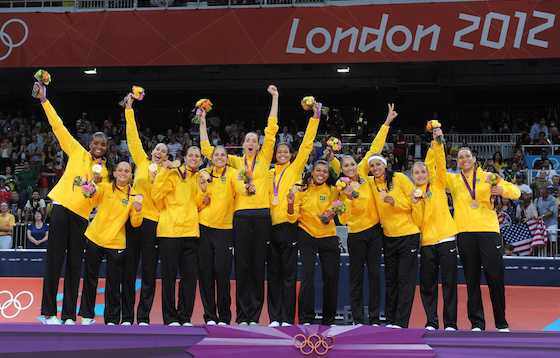 Brazil is a country that has turned into the world's Mecca for volleyball and beach volleyball but after claiming "only" silver and bronze at Horse Guards Parade, the national teams had somehow the duty to get gold at Earls Court. That quest did not look too pretentious as the 2008 gold medallists opened set 4 by going rapidly to the front (5-2); USA almost drew the count (6-5) but they were lagging behind by five points halfway through the set (14-9) as Brazil was playing with great confidence and had adjusted their block to all possible options displayed in offense by the American spikers.

The fate of the Olympic final looked somehow determined by the second mandatory stop (16-10) as Brazil succeeded in finalizing almost every single action. The decibels had moved up to the next level at Earls Court since the Brazilian supporters were trying to push their heroines all the way through to their second Olympic gold (22-14); their defence being just outstanding -- the USA could practically not score any more via their spikes -- the South Americans got close to the fulfilment of their dream but they lost their composure only for a little while, as they could glance at the finish line before Fernanda Rodrigues got the honour to score the last point for the final 3-1 (25-17).