Russia And Brazil to Clash in Men's Olympic Volleyball Final 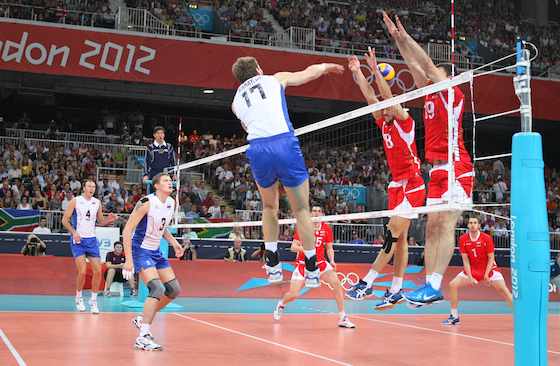 Russia and Brazil will cross paths for the first time in an Olympic Men's Volleyball Final after they edged Bulgaria and Italy respectively in the semis played on Friday at Earls Court.

Brazil will try to claim their third Olympic title after standing on top of the podium in 1992 and 2004 while Russia will try to get that gold medal that the local volleyball family has been waiting for since the 1980 Olympics in Moscow. Russia and Brazil imposed their superb quality and physical dominance in the semis where Italy did not really stand a chance while Bulgaria fought bravely but missed on their opportunities to prolong their match with Russia to the tie-break.

Bulgaria, the major sensation of the Olympic tournament, and Italy will play for bronze on Sunday morning at 9:30 am local time, as Vladimir Nikolov and his young group will try to get the first medal in the sport for their country since 1980, while Italy will vie for a third-place that would expand their Olympic collection to a total of four.

In what was a classy semi-final match Russia got the right to fight for Olympic gold at Earls Court on Sunday at 1 pm local time after edging Bulgaria 3-1 (25-21, 25-15, 23-25, and 25-23). Russia will be going for the maximum result on Sunday afternoon by playing Brazil; after the break-up of the Soviet Union that had claimed three titles, it will be Russia's second appearance in an Olympic final after Sydney 2000 where they ended up by losing to Yugoslavia.

Bulgaria remain in contention for their first Olympic medal since 1980, something only a few may have predicted before the start of their adventure in London. Maxim Mikhaylov paced once again Russia with 25 points, including two blocks and two aces, thereby claiming the much awaited duel with Bulgaria opposite Tsvetan Sokolov who registered "only" 16 but whose efforts were well supported by Todor Aleksiev (15) and Todor Skrimov (11). Bulgaria will return back in action on Sunday at 9:30 local time vying for bronze against Italy.

Brazil will play Russia on Sunday in the final match of the men's tournament at Earls Court after playing a spectacular game to down Italy in straight sets (25-21, 25-12, and 25-21) in what turned into a demonstration of world-class volleyball, confidence and fighting spirit combined all together to get the perfect mix required for a side that is vying for Olympic glory.

Brazil's supremacy was even a little embarrassing in the second set where the players coached by Bernardo Rezende displayed a full array of combinations that totally routed any resistance opposed by the Italians. Brazil will go for their third Olympic title on Sunday -- after finishing first already in 1992 and 2004 -- while Italy will play Bulgaria in the classification match, thereby hoping to add another medal to their own Olympic showcase that already includes one silver and two bronze. Murilo Endres and Cristian Savani top scored in the match with 15 points each but Brazil's dominance at the net is well testified by the stats recapping blocks (10 vs. 3) and spikes (Italy could finalize only 28 out of their 82 attempts)