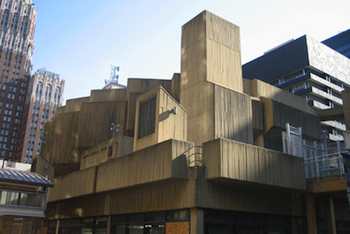 From the merely unpleasant to the borderline criminal, ugly buildings somehow manage to pop up in even the prettiest cities. With this in mind, VirtualTourist.com has announced its 2nd Annual List of the "World's Top 10 Ugly Buildings."

Looking at the grim, impersonal facade of this once-thriving theater, it's hard to believe its stage once hosted the likes of Katharine Hepburn and George C. Scott. Although it would be ugly without them, the windows boarded up with wood certainly don't help matters. Its doors now closed, the structure still incites debate among locals, many feeling the final curtain should have come down on this building long ago.

While its ugliness could easily stand on its own, the installation of small, climbing babies by the artist David Cerny transformed this tower from an eyesore to a head-shaker. Originally meant to be temporary, the unusual infant sculptures were re-installed due to popularity!

A slide projector that fell on a wedding cake that fell on a waterwheel is one description of this building known as "The Beehive." Built primarily during the '70s, its proximity to the neighboring Edwardian neo-classical Parliament House only accentuates its unattractiveness.

When looking at the primary color-coded ducts constructed on the outside of this world-famous museum, one quickly sees why these elements are usually hidden. The result of a worldwide competition, this design makes one afraid to fathom what the losing sketches looked like.

Billed as "Melbourne's Meeting Place," we're guessing that this is where city residents meet ... to go somewhere else. Frenzied and overly complicated, the chaotic feel of the complex is made worse by a web of unsightly wires from which overhead lights dangle.

A cross between a penitentiary and an unfinished Lego creation is one member's description of this dreary, block-like structure that occupies a regrettably prominent place in the city's downtown area. To make matters worse, exterior slats give the illusion that the building is actually falling apart.

Although it sounds like urban legend, a baked potato served to the architect during a dinner for the inspired this futuristic building. If only he'd been served fries instead.

What I.M. Pei's pyramid is to the , so is the relatively new Michael Lee-Chin Crystal to the . While many praise the glass structure, just as many are troubled by the incongruity to the original, more traditional museum that still sits directly beside it.

It's hard to know whether the honeycomb-pattern mesh that coats the outside of this library enhances or detracts from this bizarre structure. It's been said that when the building first opened, some thought the giant net-like feature was actually scaffolding.

Riddled with issues that range from lack of money to poor construction to rumored collapse, this still unfinished nightmare has been under some form of construction for more than 20 years. Started in 1987, construction was halted a few years later and left untouched until fairly recently.