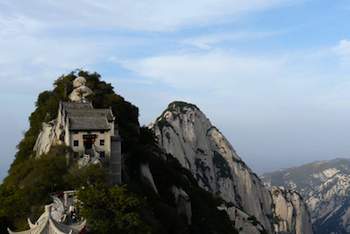 Even for those without a fear of heights there are some places that push the vertical envelope just a little too far, so with this in mind the members and editors of VirtualTourist.com have compiled this list of the World's Top 10 Scariest Places to Look Down. These choices could unnerve the steadiest of personalities.

For the ultimate in terrifying, don't-look-down experiences, nothing, nothing, could possibly beat this almost unimaginably steep mountain. As those who've braved the experience will attest, all that stands between visitors and the ground below are some old chains, some harnesses, and a crude footpath constructed from just a few creaky boards stapled together.

Maybe it's the tiny elevator that ascends diagonally to the top, or the fact that the entire structure sways in the wind (it's meant to), but whatever the reason, this wonderful symbol of the city, for some, is more symbolic of fear.

Even those who are a little weary of The Ledge have to have a good laugh at its inspiration -- forehead prints on glass left by visitors to the 103rd floor. The four glass boxes that hover over the city allow views of four different states.

Somewhere between the 1,000-foot suspension bridge (the world's highest), the world's steepest incline railway, and the Skycoaster, which propels those who dare over the Arkansas River, this is one nerve-racking place. Luckily, squeamish visitors can take refuge in the park's other activities like whitewater rafting and the wildlife at Wapiti Western Wildlife Park.

While it may not be fun to look down, looking straight ahead here can be no bargain, either. Billed as the "World's Largest Rotating Tramcar," the tramway often appears to be headed straight into the jagged rocks of the mountain it scales.

6. THE INFINITY ROOM AT HOUSE ON THE ROCK; SPRING GREEN, WIS.

It's hard to believe that the Infinity Room, which hangs almost crane-like over the surrounding forest, might be the least eccentric of this facility's attractions. Those who would like a less daunting experience should have a spin on the indoor carousel or walk through the rare book room.

According to its website, the glass floors of this tower can withstand the weight of 14 large hippos, although that's little comfort to some. Visitors who dare to take a look-see at the horizon may be rewarded with a view of Niagara Falls.

No, you're not imagining things -- this bridge truly does swing, although not quite as much as the name might imply. If the swaying is just too much, head over to the site's wildlife habitats where animals from sea otters to black bears are on view. 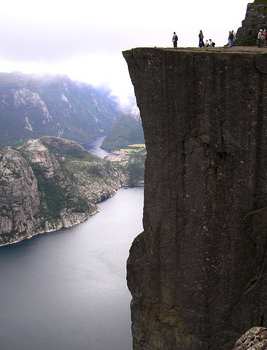 Even those who truly live life on the edge might have a hard time here.

With no guardrails whatsoever and a drop of 604 meters, this is not an experience for everyone. Even those brave enough to peer over the edge often do so by crawling there and back -- just in case!

Resembling a marble between two boulders, this incredibly risky-looking site is a favorite of adrenaline seekers who often use it to base jump.

That said, this is not the place for beginners; jumping here requires a minimum of 250 hours experience.