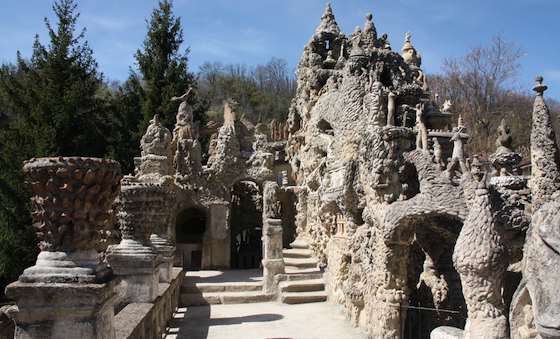 Sightseeing isn't always about the Empire State Building or the Eiffel Tower. For a less mainstream selection of great structures to see, here's a list of the world's "Top 10 Eccentric Constructions."

It took Italian immigrant Simon "Sam" Rodia more than 30 years to finish the towering masterpiece that has become a symbol of the Watts neighborhood of Los Angeles and the granddaddy of eccentric construction. Watts Towers, as it's colloquially known, is now listed in the National Register of Historic Places and is a major tourist attraction.

Talk about going postal. This French mail carrier spent 33 years creating this temple-like structure and was often said to remind visitors of an amateur Gaudi.

Constructed by Sicilian immigrant Baldassare Forestiere the gardens were started as an escape from an oppressive father back in Italy, as well as the oppressive Fresno summers. Looking at the incredible achievement, it's hard to believe that Forestiere preferred to work without a plan but instead design as he built.

A tribute to its visionary creator's love of surrealism, Las Pozas is what Lewis Carroll's dreams must have looked like. The otherworldliness of it is all the more remarkable considering that its independent-thinking, uber-imaginative creator, Edward James, was born into a world of rigid social rules at the start of the 20th century.

Perhaps the ultimate recycling project, the Beer Can House incorporates more than 50,000 cans, as well as various other untraditional siding materials like marbles, rocks, and other found objects. The home's creator, John Milkovisch, said his neighbors and wife happily participated in amassing the construction materials.

A magical attraction where visitors can actually spend the night, this complex offers a whimsical esthetic reminiscent of Niki de Saint Phalle. Aside from the bed and breakfast, the grounds also offer a cafe, garden, and thriving art gallery.

It probably won't surprise most visitors to learn that when Mystery Castle was started in the 1930s it was in close proximity to the town dump. It's been said that a dungeon is among the unusual home's 18 rooms.

Said to have financed his creation by selling more than 25,000 paintings, the artist known as Celeron sacrificed rent money to create what has to be one of the world's great staircases. Interestingly, those paintings have almost exclusively been of pregnant women.

Lauded by many and loathed by some, portions of the have been demolished twice by local government in its 24 years. Having received numerous awards and extensive international recognition, this ever-evolving art project is one of the city's most visited tourist sites.

Featuring miniature replicas of the , the Eiffel Tower, and a full-size chapel, it's not terribly surprising that this particular work was nearly 30 years in the making.