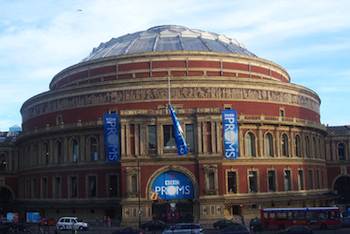 Few enjoy pushing the envelope like architects and with this in mind the members and editors of VirtualTourist.com have made their choices for the "World's Top 10 Circular Buildings and Structures." While some veer closer to ovals than perfect circles, their curves, innovation, and in some cases, history, were impressive enough to land them on the list.

The world's very first circular office building, this structure houses the studios in which some of the world's greatest music was produced. Although thought to have been modeled after a stack of 45 records, those in the know say that's only an urban legend.

Smack in the middle of midtown Manhattan this was just another office building until Ponzi schemer extraordinaire Bernard Madoff took over two floors and brought infamy with him. Although more oval than circle, this building's provenance qualified it for inclusion.

Love it or hate it this building may just stand out more than any other on the London skyline. One of the most interesting facts about it is that the remains of a Roman teenage girl found during the excavation were held at the until they could be reburied nearby 12 years later.

For a true Jetsons-like living experience, few places could beat the condominiums of the Marina City towers. Finished in the early '60s, many say the buildings' shape was meant not only to provide an alternative to the sharp lines that were de rigueur but as better defense against the city's harsh winds.

Harkening back to the days of glamorous air travel, The Theme Building was part of an early '60s LAX construction project meant to bring the facility into the modern age. Now a kitschy restaurant complete with lava lamps and curvaceous furnishings, it's the perfect place to spend a long layover.

It may have been built in the early 1600s, but this building is every modern skateboarder's dream. The structure's stunning 209-meter spiral walk of wood floors is rumored to have been used by Russia's Peter the Great as a way to get to the top of the building by horseback. Considering this fact is nowhere to be found on the building's website, however, this is probably only legend.

While a stunning relic of a fascinating culture, it's hard not to keep in mind the carnage for which this building was built. Among the more fascinating if not disturbing features of this building was a "Spolarium," no longer in existence, where the dead and nearly dead would be relieved of their armor and weapons.

Although most know it as the hall that hosts the famous Proms concert series, its stage has graced everyone from His Holiness The Dalai Lama to Jay Z. Boasting a whopper of an organ, as well as a seating capacity of 5,000, it was originally meant to host a whopping 30,000 spectators.

Bearing a remarkable resemblance to London's Gherkin, the Torre Agbar distinguishes itself from the former in part by being the arguably dominant building of its city's skyline. The inspiration behind more than a few racy jokes, it's been said its shape is actually based, in part, on an active geyser.

A structure that predates Stonehenge and the Pyramids, Newgrange is a passage grave famous for a construction scheme that allows the sun to illuminate the interior rather dramatically on the winter solstice. Entrance to the structure on the solstice is by lottery only. Tens of thousands apply but only 50 tickets (for two people each) are distributed.