Slovenia Offers Up Charm Without the Crowds 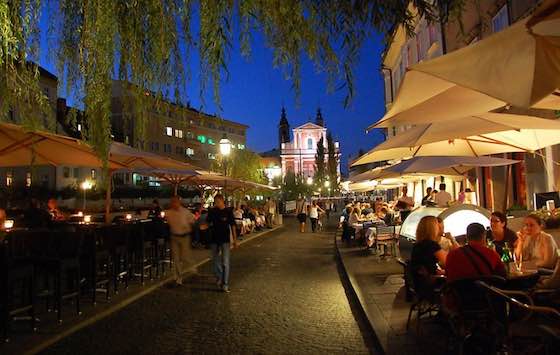 Slovenia Offers Up Charm Without the Crowds

With just 2 million people, tiny Slovenia is one of Europe's most overlooked, yet unexpectedly delightful destinations. Located where the Germanic, Mediterranean, and Slavic worlds come together, Slovenia has an intimate capital city, eerie caverns, breathtaking mountains, historic villas, and a unique tradition at a lake that prompts grooms to wed slender brides.

For centuries, Slovenia existed as a backwater of the Germanic world -- first as a holding of the Holy Roman Empire and later, the Habsburg Empire. In the aftermath of World War I, Slovenia became one of six republics that formed Yugoslavia. After defeating the Nazis in World War II, Yugoslavia emerged under the leadership of president and war hero Josip Broz (known as Tito). In the early 1990s, Yugoslavia broke up into separate countries, and Slovenia became independent.

Slovenia's capital is Ljubljana. With only about a quarter-million people, it feels small for a major city. Lacking big-league sights, Ljubljana's the kind of place where the best activities are simply strolling the riverfront promenade and sitting in an outdoor cafe watching the stylish Slovenes strut their stuff.

After being leveled by an earthquake in 1895, Ljubljana was rebuilt in the Art Nouveau and Art Deco styles that were so popular in Vienna, the empire's capital, at the time. A generation later, architect Joze Plecnik remodeled the city in his distinctive classical-meets-modern style. Like Gaudí shaped Barcelona and Bernini shaped Rome, Plecnik made Ljubljana what it is today.

The Ljubljanica River, lined with cafes, restaurants, and a buzzing outdoor market, bisects the city. The riverfront market is a hive of activity, where big-city Slovenes buy directly from the farmer. Some farmers still use wooden carts to bring veggies in from their garden patches, then flip them over to use as a sales stand.

Spanning the river are several distinctive bridges designed by Plecnik, who walked to work each day and had to live with what he designed. The Triple Bridge is both a popular meeting place and a beloved symbol of the city. The bridge seems almost Venetian: a nod to the city's unique location -- midway between Venice and Vienna, linking the Italian and Germanic worlds. The Cobblers' Bridge encapsulates Plecnik's style perhaps better than any other structure: simple, clean lines adorned with classical columns.

For a more personal look at the architect, visitors can tour his home, decorated exactly as it was the day Plecnik died in 1957. The house is filled with furniture and bric-a-brac he designed, as well as souvenirs from around the world that inspired him. As you inspect his drawings, equipment, and personal items (including his glasses and the hat that he was famous for wearing), you'll feel as though Plecnik himself invited you over for dinner.

About an hour south of Ljubljana, Slovenia's Karst region is honeycombed with a vast network of caves and underground rivers. At the Skocjan Caves, visitors tour a series of large caverns, learning how, drip by drip, stalactites grow from spaghetti-thin strands to mighty sequoia-like stone pillars. In the final cavern, a mighty river crashes below as hikers cross a breathtaking footbridge 150 feet above the torrent. It's a world where a thousand evil Wizard of Oz monkeys could fly in formation.

Equally dramatic are the Julian Alps, arcing along Slovenia's northern border. Lake Bled, Slovenia's top alpine resort, is the best home base for exploring this region. It retains an aura of the Romantic Age, complete with a sweeping alpine panorama, fairy-tale island, cliff-hanging medieval castle, and lakeside promenade. Since the Habsburg days, this is where Slovenes take their guests -- whether kings or cousins -- to show off the country's natural wonders.

Lake Bled's iconic island is the focal point of any visit. To reach the island, visitors ride romantic pletna boats, built by hand from a design passed down from father to son for centuries.

Ninety-nine steps lead from the island's dock up to the summit -- and the . On summer Saturdays, a steady procession of brides and grooms heads for the island. It's traditional for the groom to carry his bride up the steps to prove himself "fit for marriage" (about four out of five are successful).

Handsome villas line the lake, including what was once the vacation getaway of Tito, who huddled here with foreign dignitaries like Indira Gandhi and Nikita Khrushchev. After Tito died in 1980, his villa was converted into a classy hotel, offering guests a James Bond ambience. In one high-end suite, you can actually sleep in the dictator's bed. And guests can use Tito's personal desk for something I bet he never imagined ... sending an email.

This fascinating and offbeat corner of Europe is one more example of the continent's many hidden charms. With all it has going for it, it's hard to believe that Slovenia continues to glide beneath most tourists' radar.

The Best of Slovenia

Little Slovenia is the least visited and most underrated of Europe's alpine countries. From its prosperous capital of Ljubljana, we enjoy the mountain resort of Lake Bled, venture into the Julian Alps for natural thrills mixed with World War I history, go spelunking in a gigantic cave, and swim with Slavs in a charming Adriatic port.

Vacations & Travel "Slovenia Offers Up Charm Without the Crowds"