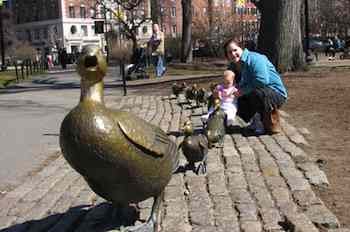 Make Way for Ducklings in Boston

While "humans" like David and the Venus de Milo may get top billing when it comes to the statue world, there are plenty of animal creations around the globe to give them a run for their money. From spiders to salmon, there are all kinds of interesting animal constructions out there; many of them are great attractions for anyone traveling with children.

Although it caused controversy when first displayed, this bold depiction of a naked man suckling a cow is now one of this charming waterfront town's most visited attractions. Depicting one of the most important stories in Nordic mythology, the original statue sits safely in the city museum while a replica greets visitors in a town square.

The exact details of the story behind this statue vary, but there's no doubt that all versions are equally heartbreaking as they are heartwarming. Having refused to leave the spot where his master died of a heart attack while on a walk, Dzok the dog was fed and cared for by the residents of Krakow until his own death in 1991.

Replicating the original sculpture, which actually stands in Bremen, this piece was a gift to the town of Riga from Bremen, its sister city. Just as the animal legs on the Bremen statue have been rubbed by visitors for good luck, so too, have the noses on the statues of the Riga version.

Unveiled in 2000 by the man who created him in 1956, this children's favorite sits ever patiently in the tube station after which he was named. True devotees of the series will want to pay a visit to the kiosk stocked with Paddington memorabilia.

Based on the classic children's tale by Robert McCloskey, the eight little duckies and one mama duck that compose this work are as much a part of Boston as the Red Sox or . Since its installation in 1987, there have been several duckling kidnappings, all of which ended happily in the safe return of the figures to their rightful home.

While it's easy to see this 32-foot-tall salmon from a distance, to take it in only from far away would be to miss much of what it has to offer. Enhanced with newspaper clippings, images drawn by area school children, and historical information about the area, this is one work that can only be completely appreciated with an up-close look.

Made from thousands of wheel rims, this giant turtle is said to be the largest manmade turtle in the world. As if this weren't enough of an accomplishment, the animal, which was built as a promotional tool for , an area business, this turtle has a head that actually bobs.

One in a series of "Big" sculptures located throughout Australia, this giant crustacean might never have been included in this group were it not for a lucky accident. The plans, which were written in feet, were erroneously read to have been in meters.

Built in 1881, this incredible and well-loved structure was originally built to attract visitors to the area but has seen life as both a rented house and tavern. When neglect and the elements threatened to destroy the animal, concerned citizens mobilized and had Lucy moved to a safer part of town where she remains today.

It's hard to believe that anything could upstage the eye-catching lines of the Frank Gehry-designed Bilbao Guggenheim, but if anything could, it's Louise Bourgeois' haunting spider. Said to represent the artist's mother, the more than 30-foot-tall structure is replicated in identical versions around the world.