Top 10 Unusual Things to Do at the Airport 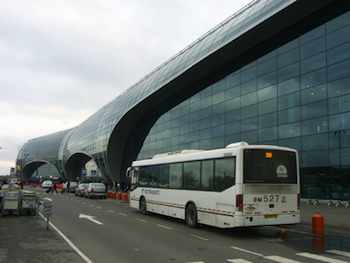 It's hard to believe there was a time when the most exciting thing a traveler could do at the airport was pop a couple of coins into a television and settle in for a few hours of whatever happened to be on at the moment. Those days are long gone with airports now offering travelers more activities than some cruise lines. Here the members and editors of VirtualTourist.com offer their suggestions for some of the more unexpected options out there.

In an effort to prevent accidents like the one that made Capt. "Sully" Sullenberger a national hero in 2009, many airports use old-school falconry to ward off dangerous birds. Moscow's Domodedovo Airport offers demonstrations to visiting children and their parents.

2. DEAL WITH YOUR FEAR OF FLYING; GATWICK AIRPORT, LONDON, U.K.

From explaining the mechanics of turbulence to dealing with psychological issues like claustrophobia, Virgin Atlantic's classes cover everything and even include an actual flight. Participants not only leave with peace of mind, but a Richard Branson-signed certificate.

Considering that is rapidly becoming more like a small city than an airport, it's hardly surprising that weddings are held here -- and elaborate ones at that. Their "Fly Away to Yesterday" package includes a flight for 25 in a vintage plane.

Located inside the Changi airport, the Ambassador Transit Hotel offers those with long layovers a chance to chill out with a few laps in their Balinese-themed pool. Because of its onsite location, travelers don't have to go through immigration in order to use the facilities.

Every day thousands of harried travelers leave everything from laptops to luggage at the airport, burdening these facilities with unwanted rooms full of abandoned items. At Miami Airport they solve the problem by holding a public auction every few months that offers bidders fantastic bargains.

Travelers with long connection times can ease the boredom by taking a lesson in traditional Korean crafts. Classes range from fan-making, to traditional sewing and knotting techniques and they're completely free.

A rocking chair, anyone? If the travelers here were given glasses of lemonade and handheld fans they might not even realize where they were. Meant to look like the rockers you'd find on any Southern porch, they were originally installed in 1997 and were kept due to their massive popularity with the public.

While it's a town more associated with winter sports, this airport sports an 18-hole golf course adjacent to its south terminal. Known for being an especially well-planned course, Wingpointe was designed by revered golf course architects .

While consulting an attorney probably isn't at the forefront of most travelers' minds, the Munich airport has lawyers at the ready just in case. For those who really want to take care of personal business, there is also a finance office.

Even if Japan is nowhere on your itinerary you can make it look like it was with this dandy little machine. Just stand and smile and before you know it, you've got a photo of yourself wearing traditional Japanese costume and standing in front of Mt. Fuji, or any of the other 12 backgrounds they offer.

Travel | Top 10 Unusual Things to Do at the Airport