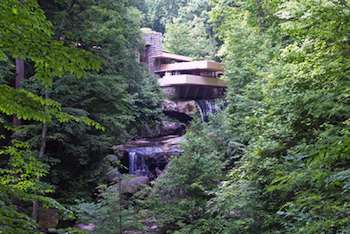 Just like people, some buildings have a je ne sais quoi that can only be described as sex appeal, so with that in mind the members and editors of VirtualTourist.com have compiled this list of the world's Top 10 Sexiest Buildings and Structures.

Somewhere between a glorious yacht, a graceful dove, and a modern dancer, the Quadracci Pavilion at the is a work of art in and of itself. To see true poetry in motion be sure to catch the Pavilion's Burke Brise Soleil at the beginning and end of the day when its wings open and close.

The supermodel of modern architecture, the twisting Mississauga towers have probably grown tired of hearing the compliments. Even before being completed the towers drew worldwide attention for their voluptuous shape.

The strong, silent type, Sonneveld House was way ahead of its time when it was built in the early '30s. Aside from its clean lines and modernist design, the home also contained a bell system to contact household help, telephone system, and highly daring color combinations.

Good luck finding a more curvaceous building on this or any other list. A head-turner to say the least, Gaudi's curvy masterpiece is made all the more amazing when one realizes this sensuous building was completed more than 100 years ago.

In a land where beauty is everywhere, the competition for the sexy title is fierce. Simple but stunning, this structure's clean lines and an intimidating scale only add to its undeniable magnetism.

The oldest building on our list, Zwinger, which was heavily influenced by Versailles, was all but destroyed in the Second World War. Painstakingly restored, it was the building's power, imposing facade, and largesse that put it on our list.

Now that the controversy has died down Angelenos can't imagine their city without the shimmering panels that gleam like diamonds in the strong California sun. The building is especially vibrant now that its dazzling and vivacious new music director, Gustavo Dudamel, has taken the reigns.

As slinky as a screen siren, this particular choice is almost more sculpture than bridge. Slithering across the water to connect the island of Penang with the Malaysian mainland, the bridge is also known for its annual marathon.

Having been featured on the cover of no less than , Fallingwater remains just as mythic and legendary as its creator, the iconic Frank Lloyd Wright. Built for the Kaufman family of Kaufman's department store fame, the gutsy house is situated on top of a waterfall, not merely with a view of it as the family first anticipated.