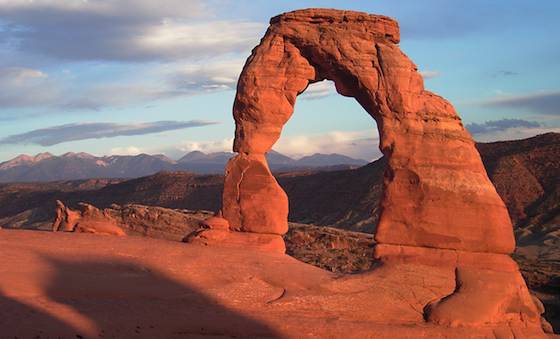 Whether natural or manmade there is something about the delicate shape of an arch that just pleases the eye. With this in mind, the members and editors of travel website VirtualTourist.com have compiled this list of the "World's Top 10 Arches". Sometimes subtly incorporated into a bridge, sometimes boldly used as an iconic symbol of capitalism, each of these choices is fascinating for different reasons.

While there are more than 2,000 natural arches in this park the real showstopper is Delicate Arch, a breathtaking sandstone arch that positively glows orange when the sun hits it just so. Once hiked, the arch offers views of the surrounding area that look like something out of a picture book.

It was Finnish-American architect Eero Saarinen who won first place in a nationwide design contest requiring contestants to create a monument honoring the country's exploratory spirit. Now the city's most notable icon, the arch is still visited by thousands each day during the high season.

It's had many incarnations since its debut in the 1920s but it's always recognizable as the glowing welcome sign to the thousands who visit every month. The city slogan, "Reno, The Biggest Little City in the World," which adorns the arch to this day, was the winning entry in a contest for which the prize was $100.

This stunner of a bridge has been in existence in one form or another since the 1600s, although the current version was constructed as recently as the 1950s. While the bridge is breathtaking at any time of year, those in the know say nothing beats seeing it at cherry blossom time.

The debate about whether this actually is or is not the world's largest as the city website proclaims rages on but no one can argue that this structure is hard to miss. Two parallel arches representing the company's iconic arch symbol stretch from one side of the highway to the other, making it almost impossible for travelers to avoid.

Once the world's largest arch bridge, this breathtaking steel stunner looks as much a natural part of the area as the trees over which it hovers. Not just a means of getting from one place to another, the bridge is the focus of an annual event called Bridge Day in which extreme athletes BASE jump off the side and visitors are allowed to walk the length of the bridge.

Never one to do things quietly, Napoleon unwittingly created one of the most beloved symbols of the city when he ordered this tribute to himself and his troops built in 1806. While a visit to Paris is hardly complete without a visit to the arch, no visitor should ever try getting to the arch by crossing the traffic-heavy streets around it. Take the underground tunnels instead.

Set against the deep-blue backdrop of the Mediterranean Sea, this massive arch, which dates from Paleolithic times, is the happy result of erosion over the centuries. Once the opening of a cave, the arch now serves as a major tourist attraction.

McDonald's may have the world's most famous golden arches, but they're certainly not the only ones. Spend some time in this city and you'll be sure to notice the giant yellow arches in the Jardines del Bosque neighborhood. Sculptor Sebastian, a Mexican artist known for his larger-than-life geometric works, designed this enormous structure.

Stari Most (The Old Bridge); Mostar, Bosnia and Herzegovina

Stari Most had stood for more than 400 years when it was destroyed during area conflict in the early '90s. Buoyed by a committee, the bridge has been fully reconstructed with special attention paid to the graceful arch that made it so notable to begin with.