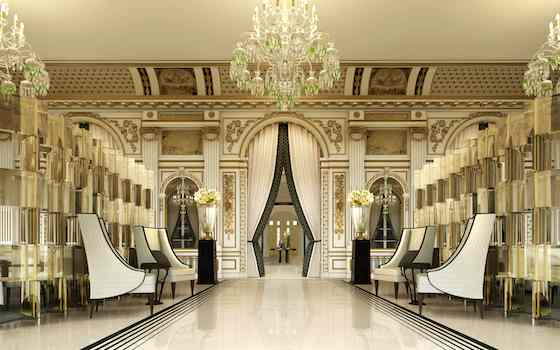 The Peninsula Hotels makes its grand entrance into Europe with The Peninsula Paris, setting spectacular new standards in design, luxury and comfort. The century-old classic building has been meticulously restored and modernised to create the latest example of Peninsula excellence.

The Peninsula Paris is located just steps away from the Arc de Triomphe and the Champs Elysées in the heart of the elegant 16th arrondissement, within walking distance to some of the world's most famous monuments, museums and luxury shopping districts

A true Parisian palace for today -- taking the very best of the old and discreetly modernising to become a thoroughly contemporary hotel, yet steeped in heritage, glamour and Parisian style

An original "grand hotel", The Peninsula offers spacious public areas, expansive rooftop and street level terraces and some of the largest guest rooms in Paris

A magnificent heritage building dating from 1908, when it opened as the Hotel Majestic -- one of Paris' most iconic "grands hotels"

Historical highlights include George Gershwin composing "An American in Paris" while staying at the hotel in 1928, while the Paris Peace Accords, negotiated by Henry Kissinger and bringing the Vietnam War to a close, were signed in 1973 in the salon which is today Le Bar Kléber.

With interiors designed by Henry Leung of Hong Kong-based Chhada Siembieda & Associates Ltd and the architectural restoration spearheaded by Richard Martinet of Affine architecture  & interior design, the building has been meticulously restored by teams of French master craftsmen, utilising traditional techniques in use for hundreds of years with the aim of preserving the heritage, authenticity and spirit of the building

Guests arrive in true Parisian style with two grand Lobby entrances -- the Avenue Kléber entrance leads to the traditional Peninsula Lobby with its meticulously restored soaring curved ceilings, magnificent drapery, marble floors and contemporary furnishings, and which offers all-day dining and the celebrated Peninsula Afternoon Tea. Meanwhile the hotel's main entrance on Avenue des Portugais is designed for arrival by car, with direct access to the hotel's own underground car park. A bespoke hand-blown Lasvit chandelier featuring a cascade of crystal "leaves" - a modern take on the plane trees lining Avenue Kléber - and a massive stone installation from Bhutan create a luxurious sense of arrival in this second lobby area

200 luxurious rooms, including 34 sumptuous suites, with five featuring their own private rooftop gardens with spectacular views over Paris

The most bespoke guest rooms in the world -- revolutionary in-room tablet technology sets new standards of guest personalisation, with fully customised interactive digital bedside and desk tablets preset in one of 11 languages

Six F&B venues offer the very best of France and The Peninsula -- The Lobby, Lili Chinese restaurant, the Kléber Terrace, the Kléber Bar, the cigar lounge and L'Oiseau Blanc rooftop restaurant, bar and terrace with 360° views over Paris

Stunning panoramic vistas of the City of Light from the L'Oiseau Blanc rooftop restaurant, lounge and bar, together with private rooftop terrace gardens for five exclusive suites

Café society on Paris' only outdoor hotel terrace -- diners can see and be seen at the al fresco streetside Kléber Terrace for all-day international and Cantonese dining, protected from the elements by a futuristic glass and stainless steel canopy

Vacations & Travel "The Peninsula Paris at a Glance"