Taking the Kids to Atlantis 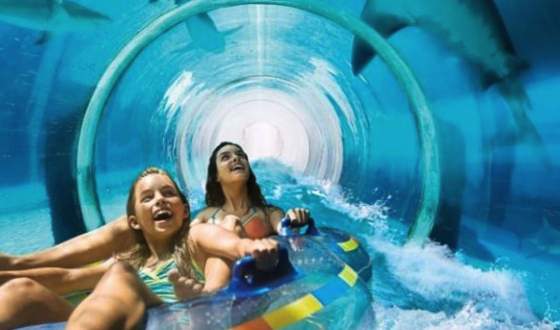 Taking the Kids to Atlantis

The $11 million nightclub has everything -- the latest technology, a DJ every night, young stars who stop by for meet and greets, specialty drinks, a cafe.

Did I mention it is just for teens? In fact, if you are under 13 or over 18, they won't let you in -- and like any self-respecting club, you need to show proof of your age on your first visit, as well as pay the $25 cover charge.

Welcome to CRUSH, Atlantis' brand-new teen club in Nassau (www.atlantis.com). The place is huge -- 14,000 square feet with multi-touch computers and surface tables (want to send an e-post card to a friend? Post a photo on your wall? Check your e-mail? Order a snack on the table-sized tablet (pizza bagel, panini or smoothie)?

A 22-foot gaming "tree" with 56 game stations surrounded by 24 comfy chairs with surround sound. There are also 10 "cabanas" that eight teens can reserve for 30-minute intervals to play the latest games. There's a gaming concierge is on hand to offer tips.

"CRUSH had things to do for everyone," said 15-year-old Kim Cusmano, from Michigan. "They played really good music and the staff was really fun. I would have gone every night but it was too expensive."

"The kids had fun but it's too pricey to send three kids more than once or twice during your stay," added Kim's mom, Cheryl.

Still, on New Year's Eve some 300 teens partied here. As Atlantis gears up for Spring Break, executives believe they will have as many as 500 teens. (And since their entrance card is scanned when they come in and when they leave, parents can know exactly where their kids are.)

Like the latest megaships, gargantuan Atlantis on Paradise Island, just 180 miles from Florida, with nearly 3,500 rooms and 8,000 employees -- the largest employer in the Bahamas besides the government -- wants to be all things to all vacationers, including those not old enough to vote.

Yes, there are 40 restaurants and bars, including Bobby Flay's first foray outside the United States, and a casino and a standout spa. But there is also the largest teen club I've ever seen, a culinary center where kids take cooking lessons, an array of "Generation Y"spa treatments and even the where kids and parents can design and build their own remote-control racecars.

Let's not forget the world's largest marine habitat (home to some 50,000 marine animals) and Dolphin Cay, which offers interactions with sea lions and dolphins (five calves were recently born) that even toddlers in diapers can take part in.

During the summer there are "fantasy camps" for kids that focus on everything from theater (learn from the Second City improve troupe) to Legos (with a Lego master builder on hand to teach) to Marine Adventures (go behind the scenes with the marine mammal team) and even the chance to get up close and personal with .

The huge (140-acre) Aquaventure with its mile-long river ride, seven-acre snorkeling lagoon (ideal for a child's first foray snorkeling), 13 pools, seven waterslides, including the Leap of Faith, a 60-foot plunge that ends in a clear acrylic tunnel in a shark-filled lagoon is such a big draw that cruise passengers spend $120 for adults and $80 for kids just for a day pass.

"I like it better than Disney World," says Shawn Cantrell, here from Kansas for the first time with his wife Betty and 8-year-old son. Ensconced in beach chairs near Splashers Betty adds, "You've got to have some cash."

That's the rub, of course. Despite deals through the spring and summer that include a fourth-night free starting at $499 per person, including two shallow-water dolphin interactions with kids 11 and under staying and eating free (as long as you book by March 31) you still will find yourself swiping your room card more than you'd like. The meal plans, like at Disney World, are a good bet, families say. "But don't count your pennies or you will ruin your time," says Josh Bateman, who had just finished playing in the water with the dolphins (at $139 per person) with his 6-year-old son Jack, who was beside himself with excitement at the experience.

Look for island-wide packages at www.nassauparadiseisland.com. A tip: A room at the newly renovated Comfort Suites Paradise Island (http://www.comfortsuitespi.com/), a five-minute walk away, can be had for less than you'd pay for a stay at Atlantis and at the Comfort Suites you get free access to all Atlantis has to offer, as well as free eats for the kids, free breakfasts and free Wi-Fi -- families here for the day on a cruise ship can book a room rather than pricey shore excursions or day passes.

On the other end of the spectrum, upscale families who prefer a more intimate experience can stay a mile away at the 105-room (www.oneandonlyresorts.com) where rooms start at $495 with a free kid's club and full access to Atlantis, including the teen club. (For a $50 fee, the staff will even entertain the kids at the water park.)

A year ago, Atlantis spent $6 million on an 8,000-square-foot facility called Atlantis Kids Adventures for kids 3 to 12 (those with special challenges are welcome), complete with LEGO room, mini grocery store and princess room where little girls can have tea parties with the stuffed animals that are lined up and waiting. Even the bathrooms are stand outs (think chandeliers in the little girls' stalls and superheroes for the boys.)

"Parents go on vacation looking for the wow factor for themselves and also for the kids," said Atlantis executive Amanda Felts. "We're taking playing to a whole new level."

Of course, it isn't cheap: Morning and evening sessions run $65 a child, but that includes a huge , the EVERY video game ever made room, theater and craft center. (Want to make jeweled flip-flops?)

Your junior foodies will love the Culinary Center with 21 seats and kid-sized utensils where professional chefs teach the kids. A group prepared Thanksgiving dinner for their parents. They will have the opportunity to make brunch for moms on Mother's Day and grill with dad on Father's Day.

See you on the Lazy River.