Salzburg Austria: Stage Of The World 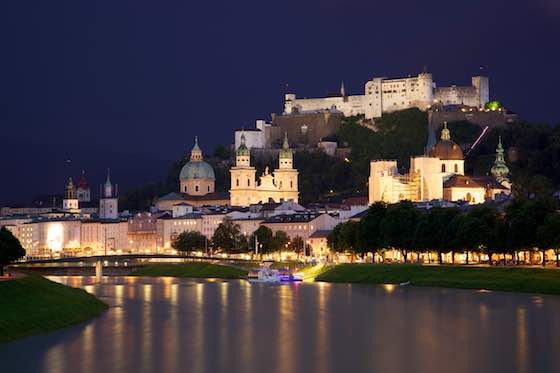 Salzburg Austria: Stage Of The World

You really don't need to be a Mozart fan to enjoy a visit to Salzburg, Austria's second city, and the place where the great composer was born. But keep in mind, they don't bill it "the stage of the world" for nothing. If you go during the festival -- no need to mention what festival we're talking about here (more on that for rookies) -- you will need lots of advance planning for reservations, tickets, etc. If you are already a Mozart aficionado, then you're probably way ahead of me for the season, but for the uninitiated, let me explain!

Mozart was born in the city on Jan. 27, 1756, and he wrote his first composition there at age 5. He was installed as the leader of Salzburg's court orchestra at age 13, and his short-but-productive life (he died at age 35 in Vienna) was closely associated with the city from that time forward. Since 1920, the Salzburg Festival has honored its native son with productions of his works by some of the world's greatest musicians.

The annual festival (www.salzburgfestival.at) takes place from the last week in July through the end of August and includes a dizzying number of performances, including opera, drama, and concerts. Each year the festival pursues a phrase -- this year it's "for love is as strong as death" from the Song of Solomon -- and develops a musical theme based on it.

Performances take place in the complex of three halls -- Grosses Festpielhaus (large festival house) opened in 1960; Haus fur Mozart (House for Mozart, used for his operas); and the Felsenreitschule (an impressive outdoor space hewn out of the Monchsberg cliffs behind the old city). Other venues include the Cathedral Square; Mozarteum; Landestheater; ; and . Performance hopping is a good way to view the sites in Salzburg, and walking from one venue to the next is completely doable in this compact city that sits on both sides of the Salzach River.

The festival, however, is for very serious Mozart fans, so if you visit at another time of year and want a minor connection, you can visit places associated with him simply by taking a leisurely stroll around the city. Start at his birthplace, No. 9 Getreidegasse, the main thoroughfare of this pedestrian-only area and then travel across the river to No. 8 Markart Square, where the family lived from 1773 to 1780. The house is a lovely museum (www.mozarteum.at) with exhibits and artifacts (including his first little violin) chronicling his life.

Back in the Aldstadt, you can grab a kaffee mit schlag (coffee with whipped cream) or lunch at , No. 22 Getreidegasse, and then wander through this former merchant's quarter resisting, if you can, the charming shops that occupy its winding courtyards and arcades. At Mozartplatz, you'll find the maestro's statue holding center stage, look-a-likes hawking concert tickets and candy (don't pass up buying a bag or two of Mozartkugeln, pistachio-flavored chocolate balls bearing the composer's picture), and street buskers playing Mozart tunes.

Somewhere in-between full-blown festival performances and street players, you can enjoy the best of both worlds at a Mozart lunch or dinner concert at the nearby restaurant Stiftkeller St. Peter. Known as the oldest restaurant in Europe, the Mozart family apparently dined here often, and the composer's C-minor mass was first performed in 1789 in the adjacent . Today, you can enjoy either a lunch or dinner concert featuring traditional 18th-century recipes along with a three-part musical program of arias and operatic duets performed by costumed players between courses (www.skg.co.at).

If you prefer the musical Trapp family to Mozart, there's no shortage of things to see and do for "The Sound of Music" fans either. The 1965 film phenomenon (it won 10 Academy Awards) was filmed in and around Salzburg, and there are bus and walking tours (www.salzburg- sightseeingtours.at) that take you to film locations such as Mirabell Palace and Gardens, Residenz Square, Nonnberg Convent, St. Peter's Cemetery, and the beautiful where the Baron and Maria are married in the film.

You can also catch a rather touristy "Sound of Salzburg Dinner Show" (www.soundofsalzburgshow.com) that features songs from the film with a bit of operetta music and a tribute to Mozart as well. Professional performers entertain while you dine on traditional Austrian fare. A more unusual and artistic approach to the film can be found at the (www.marionetten.at), an astonishingly clever puppet theater that stages performances of operas and ballets ranging from "Don Giovanni" and "The Marriage of Figaro" to "The Nutcracker" and "Hansel and Gretel." The not-for-children-only marionette theater is staging "The Sound of Music" for the first time this season (May 9 to Dec. 29) after a well-received tour of the United States in 2007.

The entire city serves as both a stage and backdrop for pre- and post-Christmas events, beginning with Advent markets called "Salzburger Christkindlmarkt" and ending with New Year's Eve concerts. I planned my early December visit to coincide with the romantic, alpine mood of the city in winter, and if you, too, like the scent of baked apples, mulled wine, roasted chestnuts, and pine boughs, then this is the time for you to visit. Cathedral Square and Residenz Square in the center of baroque Salzburg are filled with hundreds of festively decorated wooden booths offering knit, glass, and wooden handicrafts, Christmas tree ornaments, floral arrangements, and local foods. The market has been held since 1491 and is the oldest Christmas market in Austria.

Next door at the Residenz, home to Salzburg's prince-archbishops, eight large mangers crafted by artisans from the province of Salzburg are on display, and choir and brass band performances take place in front of the Cathedral on weekends. You can also skate with St. Nicholas on the ice rink installed on Mozartplatz, or top off your day with the unbeatable combination of kaffee and kuchen (coffee and cake) at nearby cafes like Demel, Fürst and Tomaselli.

Where to Stay in Salzburg, Austria

Hotel Sacher Salzburg, 5-7 Schwarzstrasse, is the city's only "grand hotel." Built in the architectural style of the turn of the century, a stay at "The Sacher" (pronounced sa-her) -- is truly memorable. Situated on the bank of the Salzach River, half of its 118 rooms and suites offer views across to the Old Town, and music lovers adore it for its close proximity to the city's festival halls. Dining in-house is a no-brainer, especially if you choose the wood paneled Zirbelzimmer with its artistically carved ceiling. Other dining options include a popular grill restaurant, a Biedermerier-inspired salon, and a cafe where you can enjoy the Original Sacher-Torte, a chocolate cake made famous in its sister hotel in Vienna.

Altstadthotel Weisse Taube, 9 Kalgasse, is a modest, family-owned hotel situated on a small street off Mozartplatz. The 56-room hotel boasts personal service and hospitality thanks to the Wollner family, who have operated the hotel for several generations.

Where to Eat in Salzburg, Austria

Augustiner Brau Kloster Mulln, 7 Lindhofstrasse, is a "must" for beer-loving visitors to Salzburg. The combination brewery and braustubl is Austria's largest beer hall, and the atmosphere is one you won't find anywhere else. Beer brewed on-site is drawn from wooden barrels and served unpasteurized in cold steins. To accompany it, you visit the "stands corridor," a collection of individually-operated booths selling everything from grilled fish and white radish salad to spare ribs, pork knuckles, sausages, pretzels, and cheese. This is the real deal when it comes to Austrian fare.

Zipfer Bierhaus, 12 Sigmund-Haffner-Gasse, is located near the university and festival halls, making it popular with both students and concertgoers. Smaller than a typical Austrian beer hall, the nicely appointed restaurant, nonetheless, serves typical beer hall fare along with traditional Austrian favorites like noodle casserole with ham in a cream sauce, breaded and fried filet of plaice or trout, veal goulash, and a spicy paprika salad with wurst and cheese. You will not leave hungry!

Stiftskeller St. Peter, St. Peter Bezirk, is one of Austria's oldest and most unique restaurants. Dating to as early as 803, the restaurant is a series of large and small rooms -- including a baroque hall where the Mozart lunch and dinner concerts take place -- built within an old Benedictine abbey. Non-concert meals include entrees like wild boar in red cabbage, schnitzel, and grilled trout as well as three- and four-course set menus. Save room for Salzburger Nockerln, the city's favorite dessert made of mounds of sweet souffle dusted with powdered sugar.

For tourist information on Salzburg, visit www.salzburg.info. The tourist information office is located at 5 Mozartplatz, in the heart of the old city. Here you can get street maps, hotel and museum information, book tours and concerts, and buy the one-, two-, or three-day Salzburg Card. The currency in Salzburg is the euro. All phone numbers are for local calls; from the United States dial 011+ 43 + 662+ local number. If you're planning to go to Salzburg in conjunction with a visit to another city in Europe, a convenient way to travel is by train. Before you go, visit www.raileurope.com for fares and schedules and to book rail passes and tickets.

The birthplace of Mozart -- and everyone's Sound of Music fantasies -- Salzburg is a Baroque jewel of a town. It's also the springboard for lots of alpine fun -- from thrilling summer bobsledding, to idyllic boat rides in the Salzkammergut lake district, to exploring the delightful romantic town of Hallstatt.