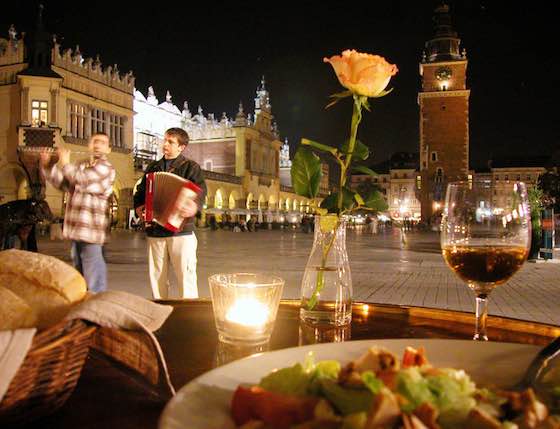 Krakow is the Boston of Poland -- a charming and vital city buzzing with history, college students, and tourists. Though not the capital, Krakow is the cultural and intellectual center of the country -- and easily Poland's best destination.

At the center of the Old Town is the Main Market Square, one of Europe's most gasp-worthy public spaces, and a great place to enjoy a drink. Knowing this is one of Europe's least expensive countries, I choose the fanciest cafe on the square and order without considering price. Sinking deep into my chair, I ponder the scene. The square is vast and grand, but still retains a folksy intimacy. It bustles with fragrant flower stalls, horse carriages carting tourists, and loitering teenagers. A folk band -- swaggering in their colorful peasant costumes -- gives me a private little concert. Feeling flush, I tip them royally. Perhaps too royally (a big tip gets you "The Star-Spangled Banner").

Back in the 13th century, vendors came to this square to sell their wares. The Cloth Hall is where cloth-sellers had their market stalls. Today it's a one-stop shopping arcade for souvenirs, including traditional embroidery, woodcarvings, and jewelry (especially amber). On the upper level of the Cloth Hall, the Gallery of 19th-Century Polish Art (which should reopen this year after a lengthy renovation) displays great paintings by native artists.

Facing the square, the imposing -- with its distinctive twin towers -- has long been an icon of the city. Each midday crowds gather inside for a medieval moment as a nun swings open the church's much-adored altarpiece. In the late 1400s, Veit Stoss carved this exquisite Gothic polyptych -- an altarpiece with pivoting panels. One of the most impressive medieval woodcarvings in existence, it depicts the death of the Virgin with emotion rare in Gothic art.

The Main Market Square may be the heart of Krakow, but Wawel Hill is in the hearts of the Polish people. The most visited sight in Poland, this is considered sacred ground, a symbol of Polish royalty and independence. Though a castle has stood here since the 11th century, the highlight is , which houses the tombs of the country's greatest rulers and historic figures. It's the Westminster Abbey of Poland.

These days, 75 percent of Poland's people are practicing Catholics. But back in the 1930s, a quarter of Krakow's population was Jewish. The Kazimierz neighborhood, named for the 14th-century king who welcomed the Jews when other nations were deporting them, was once a thriving Jewish community. While few Jews still live here, the spirit of their tradition survives. Perhaps the best way to enjoy that is at a klezmer dinner concert, with traditional cuisine accompanied by Jewish music from 19th-century Poland.

Like so many other Jewish communities in Europe, Kazimierz was decimated during the Holocaust. The fragile remains of the community, historic exhibits, and synagogues provide a meditative look at how the town was walled in and its residents eventually shipped off to concentration camps. In the old Jewish cemeteries, fragments of headstones -- broken under Nazi tank treads -- now make up moving mosaic walls and Holocaust monuments. Across the river from Kazimierz, the former Jewish ghetto is where Oskar Schindler saved the lives of many of his Jewish workers. His factory is now a museum (due to open this year) that tells the heroic owner's story.

For a look at untouristy Krakow, a walk or bike ride around Planty Park is a treat. Centuries ago, Krakovians built a wall to protect their city. By the 19th century, it was no longer necessary, so locals tore down most of it, filled in the moat, and planted trees. Today, this delightful and people-friendly green belt stretches two and a half miles around the perimeter of Krakow's Old Town.

For a grittier experience, travel 20 minutes outside the city to the remarkable Wieliczka Salt Mine, a vast, thousand-foot-deep complex with nine levels and over 100 miles of tunnels. For centuries, generations of Wieliczka miners spent their daylight hours underground, rarely seeing the sun. Some of these proud miners carved sculptures out of the salt. You'll see legendary figures from the days of King Kazimierz, the famous astronomer Copernicus, and even the region's favorite son, Pope John Paul II. The mine's enormous underground church, carved in the early 20th century, is still used for Mass. Everything, from the altar to the grand chandelier, is hewn from this underworld of salt.

Whether burrowing through Krakow's countryside or skimming the city's sights, this is a place that fascinates and inspires me. Of all of the cities boasting to be "the next Prague," Krakow is for real.

Krakow's bubbly Baroque and cobbled charm is emerging as the exciting "next Prague." Nearby, a visit to Auschwitz teaches us a timeless, soul-searching lesson. Systematically destroyed during World War II, Warsaw is a lively, thriving capital once again.