Swept Away in Rome 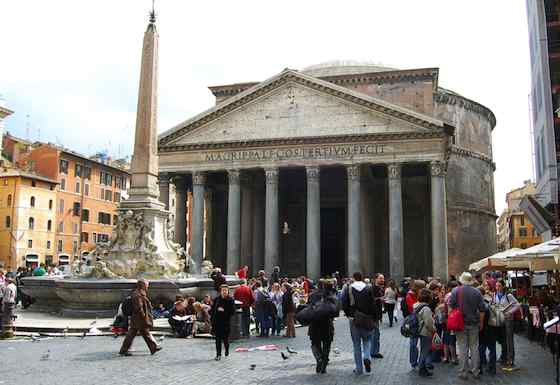 Swept Away in Rome

I'd spent the whole afternoon in my hotel room, splicing changes into the next edition of my guidebook. It was time for just a quick little break, but stepping outside was dangerous. There was a strong current out there, and I got swept out into a Roman sea filled with colorful -- and fragrant -- distractions. I didn't get back for hours.

From my hotel, I flowed downhill to the Pantheon's portico, where I saw a symphony of images: designer shades and flowing hair backlit in the magic-hour sun; a flute section of ice-cream-lickers sitting on their marble bench while a fountain spritzed in the background under an obelisk exclamation point; strolling Romanian accordion players who refuse to follow the conductor; and the stains of a golden arch on a wall marking where a once sold fast food.

As I let go of the Pantheon's columns, the current swept me past siren cafes, past TV crews covering something big in front of the parliament building, and out into Via del Corso. On my swim through the city, this was the deep end: The rough crowd from the suburbs comes here for some cityscape elegance. Today they'd gooped on a little extra grease and were wearing their best leggings, heels, and T-shirts.

Veering away from the busy pedestrian boulevard, I came upon Fausto, a mad artist standing proudly amid his installation of absurdities. While crazy, he always seems strangely sane in this world. And with the recent opening of the giant and trying-too-hard MAXXI modern art museum (11 years and $200 million for very little), Fausto struck me as downright brilliant. He's the only street artist I've met who personally greets viewers. After surveying his tiny gallery of hand-scrawled and thought-provoking tidbits, I asked for a card. As he gave me a handmade piece of wallet-sized art, he reminded me that his "secretary" was at the end of the curb -- a plastic piggy bank for tips.

Next came the Campo de' Fiori, which usually creates its own current, but today felt like a punished child. After a Roman teenager drank herself into a coma, the police banned the consumption of alcohol outside of bars and restaurants. It's like someone turned on the lights at a party before midnight. Later, I wandered past Prime Minister Silvio Berlusconi's headquarters. What used to be a very helpful bus stop had been replaced with police vans to provide security for Italy's bombastic leader.

I passed a homeless man, tattered but respectfully dressed, leaning against a wall. He was savoring a cigar and a bottle of wine while studying Rome's flow as if it had a plot. Next, I chatted with twins from Kentucky, giddy about their Roman days as they celebrated their 40th birthday together. Their Doublemint smiles and high energy made them a great case for embracing the good life.

Moving on, I slipped into a church just as the ushers closed the doors for Mass. Inside, the white noise of Roman streets became the incensed hum of a big church with a determined priest -- and not enough people. I slipped down the side aisle, hands folded as if here to worship, to catch a glimpse of a Caravaggio, that thriller of the early 17th century.

Stepping back outside, I found myself at the north entrance of the ancient city. Determined to swim to my hotel to get back into data entry, I passed the same well-dressed bum with the cigar and the buzz, still intently caught up in the city. I imagined being in his pickled head for just a moment.

Near him, guys from Somalia launched their plastic fluorescent whirlybirds high into the sky while their friends slammed plastic doll heads into boards so hard the heads became spilled goop. Then the dolls creepily reconstituted themselves, ready for another brutal slam. These street trinkets keep illegal African immigrants from starving. They made me wish I had bought all the goofy things people have sold on the streets of Rome over the years -- from the flaming Manneken-Pis lighters to the 5-foot-tall inflatable bouncing cigars to the twin magnets that jitter like crickets when you play with them just so -- and made a museum.

Finally, I swam with a struggling stroke back to the safety of my hotel, where none of that Roman current is allowed in. The problem: While taking a break from inputting, I came home with even more to input. In Rome, one thing leads to another, and, if you're trying to get on top of your notes, it can be dangerous to go out.

In this hour-long travel special, we explore the "Eternal City" of Rome, a grand and ancient metropolis rich with exquisite art, vibrant culture, and centuries of history. We trace the rise and fall of classical Rome, meander through the heart of Bernini's Baroque Rome, and make a pilgrimage to the Vatican. Then, we follow Rick as he uncovers the charms of hidden neighborhoods filled with character and energy, enjoys a Roman feast, and mixes and mingles with the locals during an early-evening stroll through the city's romantic nightspots.

Vacations & Travel "Swept Away in Rome"