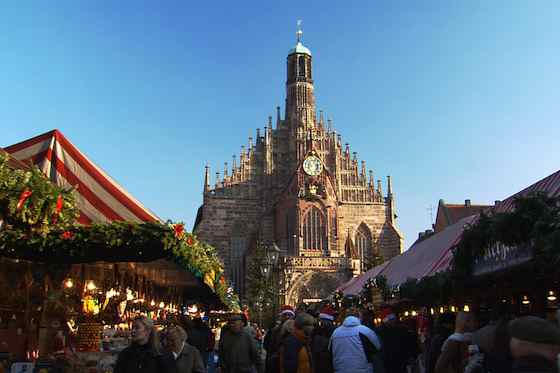 Cradling a cup of hot-spiced wine as a hand warmer, I stroll through Nurnberg's main square. All around me are bundled-up shoppers and kids sampling fresh gingerbread, riding the carousel, listening to roving brass quintets, and marveling at the newest toys.

I'm standing in Germany's largest Christmas market -- 200 wooden stalls crammed with local artisans dealing in all things Christmas. With all these goodies, it's no wonder that Nurnberg's Christkindlesmarkt (www.christkindlesmarkt.de) attracts more than 2 million people annually.

A traditional center for toy-making in Germany, Nurnberg has long prided itself on the quality of its market. With no canned music, fake greenery, plastic kitsch, or war toys, it feels classier than your average crafts fair. As far back as 1610, a proclamation warned that "indecent joke articles would be confiscated." The merchants' stalls are old-style wood huts with traditional ambience, and each year the most beautiful stall is awarded the prestigious "Prune Man" trophy, a homemade figurine made of fruit.

Germany's holiday markets are a Christmasy fantasy of tiny figurines -- and this market offers some of the best. Nutcrackers, strong-jawed to crack even the toughest nuts, are usually authority figures like soldiers, policemen, and constables. "Smokers," which are small carvings of woodworkers, loggers, postmen, and other common folk, send out fragrant incense from their tiny smoke-ring-blowing mouths.

Many of these classic wooden figurines originated in the highly forested region of Saxony in eastern Germany. When the iron ore and silver mines went out of business back in the 15th century, Saxon miners became woodworkers.

A popular Nurnberg decoration is the candle chime. A multi-tiered wooden stand holds candles, which heat a pinwheel on top, causing it to spin. Each level of the stand features a different carved scene -- a Nativity, forest critters, nutcrackers, or miners at work. It's said these chimes were especially popular in mining communities because of the miners' hunger for, and appreciation of, light.

The golden Rausch Angel hovering above the market is an icon of Christmas in Nurnberg. The name is a bit of German onomatopoeia -- "rausch" is the sound of wind blowing through the angel's gold foil wings. For locals, there's no better way to cap their home's Christmas tree than with a miniature version of this angel.

After the sun sets, Nurnberg's Christkindlesmarkt delights as shoppers enjoy some old-time fast food. Spicy smoke billows from stalls selling the famous Nurnberg bratwurst, skinny as your little finger. Stick three of them on a crunchy fresh roll and then add a generous squirt of spicy mustard.

At the next stall, wrap your mittens around a mug of hot-spiced wine. A disposable paper or plastic cup would ruin the experience, so you must pay a deposit for a nicely decorated ceramic one. Either return the mug or keep it as a collectible, since each year there's a different model.

Bakeries crank out traditional gingerbread -- the Lebkuchen Nurnberg -- using the same recipe they did in the 17th century. Back then, Nurnberg was the gingerbread capital of the world, and a stroll through the market makes it clear that the city's love affair with the cake continues.

For four centuries, the families of Nurnberg have bought their gingerbread at this thriving Christkindlesmarkt. The gingerbread was not baked in the home, but was made exclusively by a guild of master bakers, the Lebkuchler.

The cake itself became a work of art. Well-known sculptors, painters, and goldsmiths added ornament and detail. Carvers whittled intricate wooden molds of hearts, angels, and wreaths. Painters frosted the cookies or added a flourish of gold paint.

Germany's gingerbread tradition -- whether as a spiced cake, cookie, or even a small loaf -- has spread throughout Europe, and they're sold at fairs, carnivals, and markets.

Another German tradition that has spread all over Europe and the New World is the candy cane. The first candy canes were simple, straight white sticks of sugar candy. In 1670, a choirmaster at the , fed up with noisy kids ruining the ambience, passed them out during a Nativity service to keep the restless children quiet. He'd had the ends bent to depict a shepherd's crook. German immigrants to America popularized the practice of using them to decorate Christmas trees (and an American company added the signature red stripes in the 1920s).

Germany has long celebrated Christmas well, with markets that seem more like a public service than a seasonal business. From sweets to savory treats, candles to carousels, Nurnberg's Christkindlesmarkt warms up cold days and lights up dark nights. Its festive swirl of heartwarming sights, sounds, and scents is sure to get you in the holiday spirit.