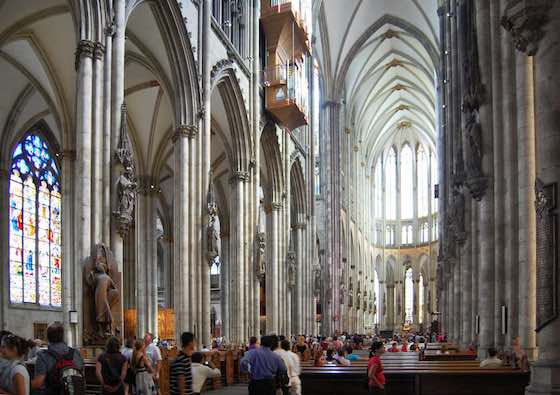 On the banks of the Rhine, Cologne is an urban Jacuzzi that keeps the Rhine churning. The city that the residents call "Koln" is home to Germany's greatest Gothic cathedral, its best collection of Roman artifacts, a world-class art museum, and a healthy dose of urban playfulness.

This western Germany river town makes an ideal on-the-way stop -- it's a major rail junction, and its top sights are clustered near the train station. With a couple of hours, you can toss your bag in a locker, take a quick town walk, zip through the cathedral, and make it back in time for your train.

Stepping out of the train station, you're confronted with a modern hodgepodge of post-WWII architecture and the towering icon of Cologne, its cathedral. The city feels rebuilt -- because it was. The Allies bombed Cologne hard in retaliation for Germany's bombing of London. World War II bombs destroyed 95 percent of Cologne, but the cathedral held up fairly well. (Fourteen bombs hit the cathedral, but the skeletal Gothic structure flexed, and it remained standing.) In anticipation of the bombing, the glass and art treasures were taken to shelters and saved.

Cologne has long been a religious center -- perhaps the most important in Germany. In 1248, its original cathedral burned down as workers were trying to replace it with something more modern -- a style we now call Gothic. While the current cathedral was built according to its original 13th-century plans, and the left (east) part was completed in the 13th century, the right half wasn't built until after German unification, in the 1880s.

Once you're inside, if you feel small -- you're supposed to. The 140-foot-tall ceiling reminds us of our place in the vast scheme of things. Lots of stained glass -- enough to cover three football fields -- fills the church with light, representing God.

Next to the cathedral are two notable museums -- the and the Museum Ludwig. Through the generous window, budget travelers can get a free look at the museum's prize piece -- an ancient mosaic floor. Once the dining-room floor of a rich Roman merchant, this is actually in its original position (the museum was built around it). It shows scenes from the life of Dionysus ... wine, women, and song, Roman-style. Inside the museum, you'll find an elegant and fascinating display of Roman artifacts: glassware, jewelry, and mosaics -- evidence of Cologne's status as an important site of civilization long before the cathedral was ever imagined (www.museenkoeln.de/rgm).

Next door and more enjoyable, Museum Ludwig offers a stimulating trip through the art of the last century, including American Pop, post-WWII art, and edgy German masterpieces from the Haubrich collection. Josef Haubrich managed to keep his impressive collection of German Expressionist art out of Nazi hands (they considered it "decadent art") and eventually gave it to the city. It includes works by the great Expressionists Max Beckmann, Otto Dix, and Ludwig Kirchner, all of whom fled Germany during Nazi times and did much of their best work outside their homeland. Their paintings capture the loss of idealism and innocence following World War I, and helped take art into the no-holds-barred modern world (www.museum-ludwig.de).

Cologne's most popular museum -- a 10-minute riverfront walk from the cathedral -- offers a different kind of decadence. , cleverly billed as the "MMMuseum," has three levels of displays that follow the cocoa bean from its origin to the finished product. Local historians, noting the "dumbing-down" of this generation of tourists, complain that this museum gets more visitors than all of Cologne's other museums combined. Some visitors find that the museum takes chocolate too seriously, and wish the free samples weren't so meager -- you'll have to do your indulging in the fragrant, choc-full gift shop (www.chocolatemuseum-cologne.com).

After tantalizing your taste buds, it's time to satisfy your sense of smell. Take a walk through the Old Town to 4711 Glockengasse, which claims to be the birthplace of the original Eau de Cologne (Germans call it "Kolnisch Wasser"). In 1810, the inventor stopped calling it medicine and started marketing it as a perfume, putting Cologne on the map. Locals claim Eau de Cologne was the first perfume based on alcohol (86 percent alcohol; the rest is herbal fragrances). The original "Cologne Water" runs in a fountain by the door.

As you head back to the train station, you realize that modern Germany isn't sitting on a stump, wearing lederhosen and yodeling. It's a no-nonsense, lean-and-mean business machine with 80 million people packed into a country the size of Montana. A visit to Cologne gives you a satisfying slice of this 21st-century powerhouse -- a bustling commercial and cultural center that still respects its rich past.

After visiting Germany's greatest Gothic Cathedral in Cologne, we'll enjoy the good life German-style at a top mineral spa and try our luck at the Versailles of casinos in Baden-Baden, then crank some old-time music and explore an open-air museum in the romantic Black Forest.