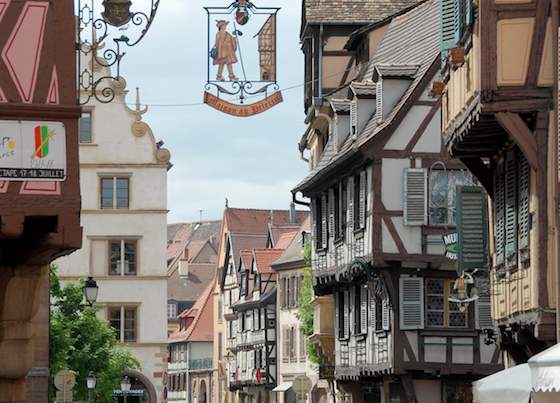 Alsace is France with a German accent. Its unique mix of cultures offers enchanting cobbled villages, scenic vineyards, gourmet cuisine and art that is as vibrant as the medieval day it was painted.

Standing like a flower-child referee between France and Germany, Alsace has weathered many invasions. Once a German-speaking part of the Holy Roman Empire, it became part of France in the 17th century. After France lost the Franco-Prussian War in 1871, Germany annexed it. It bounced back to France after World War I (though Hitler's army occupied it during World War II).

All these centuries as a political shuttlecock have given Alsace a hybrid culture. And the city of Colmar is a great home base to experience it. Long popular with French and German tourists, this well-pickled old town of 70,000 is often overlooked and underrated by overseas travelers.

During World War II the American and British military were careful not to bomb quaintly cobbled Colmar. So today Colmar not only survives, it thrives with 15th- and 16th-century buildings, distinctive cuisine, and rich art treasures.

Colmar's gets my vote as the best small museum in Europe (www.musee-unterlinden.com). It fills a 750-year-old former convent with exhibits ranging from Roman artifacts to medieval winemaking, and from traditional wedding dresses to paintings that give vivid insight into the High Middle Ages.

Matthias Grunewald's gripping Isenheim Altarpiece, which shows a gruesome crucifixion, is the museum's most important work. Germans know this painting like Americans know the Mona Lisa. The altarpiece was commissioned 500 years ago by a monastery hospital filled with people suffering terrible skin diseases -- a common cause of death back then. The hospital's goal, long before the age of painkillers, was to remind patients that Jesus understood their suffering. The many panels led patients through a series of Bible stories culminating with a reassuring Resurrection scene.

Colmar's replica of a more modern icon will surprise many Americans. Colmar is the hometown of Frederic-Auguste Bartholdi, the great sculptor who designed the Statue of Liberty -- which was a gift from France to the United States on its 100th birthday. Colmar's describes the creation of Lady Liberty and displays many of Bartholdi's sculptures (www.musee-bartholdi.com). One room is dedicated to the evolution and completion of the Statue of Liberty; she was assembled in Paris, then taken apart and shipped to New York in 1886 ... 10 years late. If you come on the Fourth of July, the admission is free.

The dry and sunny climate here has produced good wine and happy tourists since Roman times, so vineyard-hopping is a great way to spend an afternoon. Roadside degustation signs mean wine-tasters are welcome, but be prepared for grape varieties that differ from what you might find elsewhere in France.

Riesling is the king of Alsatian grapes; it's robust but drier than the German style you're probably used to. Sylvaner -- fresh and light, fruity and cheap -- is a good Alsatian wine for a hot day. Pinot Gris wines are more full-bodied, spicier, and distinctly different from other Pinot Gris wines you may have tried. Gewurztraminer is "the lady's wine" -- its bouquet is like a rosebush, its taste is fruity, and its aftertaste is spicy -- as its name implies (gewurtz means "spice" in German). In case you really get "Alsauced," the French term for headache is mal a la tete.

Along with its wine, Alsatian cuisine is world-famous. Even vacationers traveling on a shoestring should spring for a fine meal in Alsace.

For lighter fare, try poulet au Riesling (chicken cooked ever-so-slowly in Riesling wine). At lunch, or for a lighter dinner, try a tarte a l'oignon (like an onion quiche, but better) or tarte flambee (like a thin-crust pizza with onion and bacon bits). Dessert specialties are tarte alsacienne (fruit tart) and Kuglehopf glace (a light cake mixed with raisins, almonds, dried fruit, and cherry liqueur).

For a pleasing taste of European culture, there's nothing quite like Alsace. Visitors enjoy a rich blend of two great societies: French and German, Catholic and Protestant -- just enough Germanic discipline with a Latin joy of life.

When you visit Alsace, France:

Hotel Saint-Martin, ideally situated near the old Customs House, is a family-run place that began as a coaching inn (splurge, www.hotel-saint-martin.com). Hotel Balladins, near the , is modern, efficient, clean, and cheap (budget, www.balladins.com).

Getting to Alsace, France:

There are four, direct, high-speed trains from Paris that connect to Colmar daily in about three hours; see www.scnf.com.

Alsace is a northeastern French region on the Rhine River plain. Bordering Germany and Switzerland, it has alternated between German and French control over the centuries and reflects a mix of the 2 cultures. Its capital, Strasbourg, is centered on the Ill River's Grand Ïle island, bordered by canals and home to the Gothic Cathédrale Notre-Dame de Strasbourg, with its animated astronomical clock.

On the loose in France's countryside, we drive up Alsace's Route du Vin for miles of vineyards, half-timbered villages, and feudal fortresses. We head to Verdun to walk the trenches of World War I before visiting Reims Cathedral to marvel at Gothic splendor and Chagall's stained glass. Our final stop is Epernay, the bubbly birthplace of champagne.