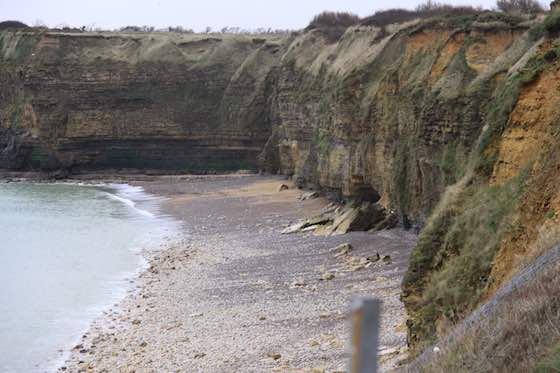 Every year June 6th marks the anniversary of D-Day, the Allied invasion of Normandy, and the beginning of the end of World War II.

Normandy's inhabitants haven't forgotten what the British, Canadian and American troops and their families sacrificed all those years ago. When I was on the small main square of a town in Normandy, an elderly Frenchman approached me and sang a few bars of "The Star-Spangled Banner." The region remains particularly friendly territory for Americans, and is an inspiring place to see museums, monuments, and cemeteries that pay tribute to the courage of the Allied armies.

The Normandy sites are spread along 75 miles of coastline, and it takes at least one full day to explore them. You can use a rental car or take one of the many minivan tours offered by small companies (such as Battlebus and Normandy Battle Tours). As you travel the narrow lanes of this still-rural area, you'll get a taste of the boldness, complexity, and hardship of the Allied undertaking.

A good place to start your tour is the touristy-but-fun town of Arromanches. At a makeshift harbor here, the Allies arrived in the largest amphibious attack ever. A visit to the small is the only way to fully appreciate how the harbor was built. In just 12 days, Allied forces positioned massive concrete platforms and built roads nearly a mile long, floating on pontoons. Within six more days, more than 300,000 troops with all their equipment had established a beachhead here. Remnants of the manmade harbor are still clearly visible in the water. Wander the beach among the concrete and rusted litter, and be thankful that all you hear are birds and surf.

Just 10 miles west of Arromanches, the Longue-sur-Mer Gun Battery (free and always open) is worth a stop. Four German casemates hunker in bunkers, the only original coastal artillery remaining in place in the D-Day region. The beautiful views from the bluffs here were of strategic importance to the Germans, who kept watch over the English Channel from an observation bunker buried in the cliff side.

The human cost of the invasion is inescapable at the nearby American Cemetery at St. Laurent. Crowning a bluff just above Omaha Beach, this was the eye of the D-Day storm. Nearly 10,000 brilliant white-marble tombstones glow in memory of the Americans who gave their lives to free Europe. At the cemetery's Visitors Center, computer terminals provide access to a database containing the story of each U.S. serviceman who died in Normandy.

Wander among the peaceful and poignant sea of headstones. Notice the names, home states, and dates of death inscribed on each. A path from the Visitors Center leads to steps down to the beach. The highest casualty rates of the invasion occurred here. Filled with holidaymakers in good weather, the beach is tranquil now. A walk on Omaha Beach is a powerful experience, as you struggle to reconcile the quiet beauty of the setting with the horrible toll of that day.

The most heavily fortified German position on the coast was farther west, at Pointe du Hoc. The Allies bombed it to smithereens before sending 300 handpicked U.S. Army Rangers to assault its cliffs, using grappling hooks and ladders from London fire departments. Visitors today can see the smashed German bunkers and bomb craters that only hint at the carnage and chaos that occurred here. Picnicking is forbidden at Pointe du Hoc -- the bombed bunkers are considered gravesites.

To cap your Normandy experience, spend time on your way to or from the beaches at the in Caen, the first big city freed by the Allies. This is the best World War II museum in France. Officially named the Memorial for Peace, it puts the Battle for Normandy into a broader context with informative exhibits and stellar films (some with footage from D-Day itself). The "World Before 1945" wing covers the lead-up to the war and its key battles and events, many of which are brought to life by soldiers' diaries and letters. The museum also offers good-value minivan tours covering the key sites along the D-Day beaches.

The contemplative finale of the museum is a walk through the U.S. Armed Forces Memorial Garden. Plaques honor the sacrifice young American soldiers made for Europe. Children enjoy this memorial as a playground, and their presence captures the spirit of the quote etched in the pavement: "From the heart of our land flows the blood of our youth, given to you in the name of freedom."