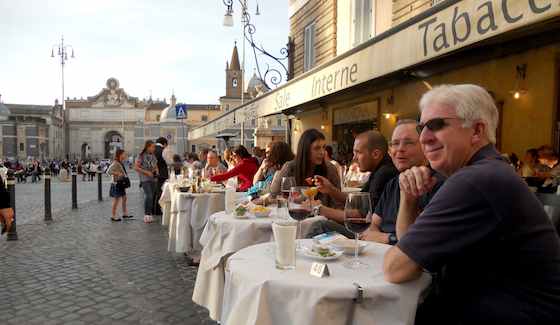 I'm not the cocktails-at-happy-hour type of traveler. But this summer, I savored a peaceful moment in Siena's great square, Il Campo, sipping a glass of "vin santo" as the early evening light bathed the red-brick stone. My five-euro drink gave me a front-row seat at the best table on the square, and for a leisurely hour I soaked up the promenading action that nightly turns Il Campo into "Il Italian Fashion Show."

Public squares like Il Campo are the physical and cultural heart of Europe's cities and towns. For Europeans, these bustling squares proclaim "community." Defined by stately architecture and ringed by shops and cafes, squares are the perfect venue for the outdoor theater of cafe-sitting, coffee-sipping, and people-watching. Promenaders take center stage, strolling and being seen, while onlookers perch on the periphery. To play your part, tether yourself to one of the cafe tables parked around any square, order a drink, and feel the pulse of the passing scene. Don't be in a hurry -- endless hours sitting in an outdoor cafe is the norm.

Tourists are often stung by not understanding the rules of cafe culture: In many countries, you'll pay less to stand and more to sit. In general, if you simply want to down a drink, then order and drink it inside, at the bar. If you want to sit a while and absorb that last museum while checking out the two-legged art, grab a table with a view, and a waiter will take your order. This will cost you about double what it would at the bar. If you're on a budget, always confirm the price for a sit-down drink. While it's never high profile, there's always a list posted somewhere inside with the tiered price system clearly labeled (cheap at the bar, more at a table, still more at an outside table). If you pay for a cafe seat with an expensive drink, that seat's yours for the entire afternoon if you like.

Siena's Il Campo is my favorite square for cafe-sitting in Italy, but it's not the only contender. Rome's Piazza Navona, sporting a Baroque Bernini fountain, is filled with people no matter what the weather or the time. It offers Rome's most interesting night scene, with street music, artists, fire-eaters, Casanovas, ice cream, and cafes worth the splurge to sit and enjoy Italy's human river. Venice's grand St. Mark's Square is owned by pigeons and tourists by day, but at night, it is a romantic place to be, as lantern light transports you to another century. Among the elegant cafes lining the square is the notorious Caffe Florian, a popular spot for discreet rendezvous since 1720 and one of the first places in Europe to serve coffee.

In Poland, Krakow's stately Main Market Square is a marvelous public space that still looks much as it did in the 13th century. There's always something going on here: outdoor art exhibits, impromptu musical performances, or festivals and markets, the biggest of which are the seasonal markets before Easter and Christmas. The square may look medieval, but its Town Hall Tower beams out a free Wi-Fi signal to the cafes below.

Many great public squares began life in the Middle Ages as central markets, teeming with merchants and buyers. Markets are still a central feature of life in France, where "marches" take over town squares for one or more days each week. In Paris, the pretty little place Louis Lepine -- which hosts a fragrant flower market most of the week -- on Sunday flutters with a songbird market. It's just one of dozens of specialty and produce markets scattered throughout the city's squares. Market day is as important for its social connections as for its shopping -- you'll see neighbors freely exchanging the ritual three cheek-kisses reserved for good friends.

The ultimate Spanish square is Salamanca's handsome Plaza Mayor. Slow your pace, sit down, and nurse a cup of coffee in this atmospheric place (try the classic ). In earlier days, during the traditional evening stroll, girls promenaded clockwise around the square, while the boys cruised counterclockwise. People-watching peaks on Sundays right after Mass, when everyone turns out in their finest clothes. It's a multigenerational parade that to me is quintessentially European.

As a traveler, you naturally want to take in as many sights as you can every day. But make time in your itinerary to simply drop yourself into a cafe chair for a few hours. Enjoying life like the Europeans do -- watching the world go by -- is one of the best and most relaxing ways to go local.