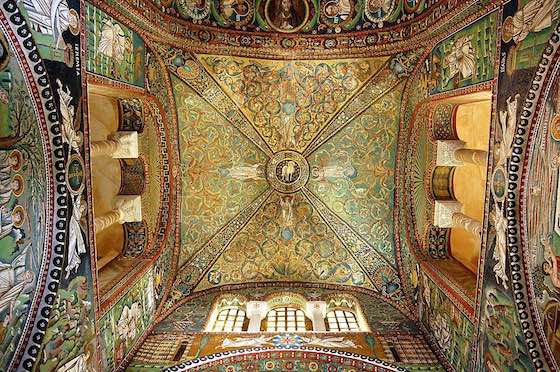 Ravenna is on Italy's tourist map for one reason: its 1,500-year-old churches decorated with the richest collection of Byzantine mosaics anywhere. While locals go about their business, busloads of tourists slip in and out of this town near the Adriatic coast to bask in the glittering glory of Byzantium, the Eastern Roman Empire.

Imagine ... it's A.D. 540. The city of Rome has been sacked, the land is crawling with barbarians, and the Roman Empire is crumbling fast. Into this chaos comes the emperor of the East, Justinian, bringing order and stability -- and an appreciation for mosaic art.

As the westernmost pillar of the Byzantine Empire, Ravenna was a flickering light in Europe's Dark Ages. To fully appreciate the mosaics in its ancient churches, bring your binoculars and take in every last detail. Sit in a wooden pew, front and center, and feel yourself transported to a world of spirit.

My favorite church in Ravenna is Justinian's Basilica di San Vitale. The building's octagonal shape -- very much an Eastern style -- actually inspired the construction of the magnificent Hagia Sophia church built a few years later in Constantinople (now Istanbul). While it's impressive enough to see a centuries-old church, it's rare to see one decorated with brilliant scenes in marble and glass mosaics -- each chip no bigger than a fingernail. High above the altar, Christ is in heaven, overseeing creation. And running things here on earth is Emperor Justinian -- sporting a halo and a crown to show he's leader of the church and the state. Also present is his wife, Theodora. An aggressive Constantinople showgirl, she used all her charms to gain power with -- and even over -- her emperor husband in their lavish court.

The mosaics on the walls and ceilings of San Vitale sit at a tipping point in time, when European art shifted from the style of ancient Rome to that of the Middle Ages. Above the altar, Christ is beardless, in the manner of the ancient Romans, but nearby, decorating an arch, is a bearded Jesus, the standard medieval portrayal. Yet both scenes were created by artists of the same generation.

The humble-looking little Mausoleum of Galla Placidia has the oldest -- and to many, the best -- mosaics in Ravenna. The little light that sneaks through its thin alabaster windows brings a glow and a twinkle to the very early Christian symbolism (Jesus the Good Shepherd, Mark's lion, Luke's ox, John's eagle, the golden cross) that fills the little room. Pre-dating Justinian, the mosaics here are purely Roman. Even Jesus is dressed in gold and purple, like a Roman emperor.

The art of mosaic making is still alive and well in Ravenna. At the austere Basilica di Sant'Apollinare Nuovo, decorated with two huge and wonderfully preserved side panels showing a procession of haloed virgins and Christ on his throne, contemporary artists work in the second-floor mosaic laboratory. The process they use is much the same today as in ancient times. Tiny colored glass and gold-leaf pieces are broken with a hammer to fit a design derived from a pattern and set in cement. The results are almost as brilliant and beautiful as they were in Justinian's time.

Justinian turned Ravenna into a pinnacle of civilization. After 200 years, however, the Byzantines got the boot, and Ravenna eventually melted into the background, staying out of historical sight for a thousand years. Today the local economy booms with a big chemical industry, the discovery of offshore gas deposits, and the construction of a new ship canal connecting the town to the Adriatic Sea.

Ravenna is only a one-hour detour from the main Venice-Florence train line and worth the effort for those curious about old mosaics. The key sights are all easily walkable from the train station, but this is a fun city to do by bike. A handy bike-rental place is right at the station. I've enjoyed doing my hotel and restaurant rounds in Ravenna on two wheels.

The Piazza del Popolo at the town center was created around 1500, during a period when the city was ruled by Venice. A river once flowed here, but it got mucky and full of mosquitoes. (Dante died here of malaria.) The people of Ravenna have treated this spot as their communal living room for centuries. Today, in the shadow of Venetian facades, it's a fine place to join the old guys on benches, watching locals parade by, quite at ease about sharing their town with the world's most exquisite mosaics.

So much sightseeing greatness hides in the shadows of Europe's more popular tourist attractions. While Ravenna can't hold a candle to nearby Venice, it still gives off its own glittering light.

In the shadow of Venice, we visit three great cities. Padova is famed for its venerable university, precious Giotto frescoes, and pilgrim-packed Basilica. Verona is a hit with aficionados of Roman ruins and Romeo and Juliet fans. And Ravenna, with its shimmering mosaics, was once the western bastion of the Byzantine Empire. We enliven each stop with a tasty dose of Italian "dolce vita."