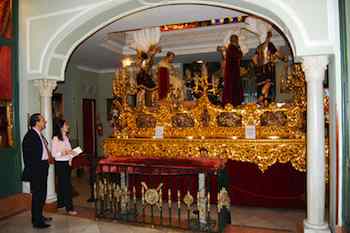 Every Good Friday, this three-ton float, depicting the Sentencing of Christ, is carried through the streets of Sevilla by teams of 48 men. For the rest of the year, it resides here at the Basilica de la Macarena.

It was Easter week in Sevilla, Spain, and the scene was holier than ever. Paraders in purple-and-white cone hats shuffled past, carrying crusader swords and four-foot candles. Like American kids scrambling for candies at a parade, Spanish kids collected dripping wax from religious coneheads, attempting to amass the biggest ball on a stick for their Easter souvenir.

The procession squeezed down narrow alleys. Legions of drums cracked eardrums in the confined space. Kids sat wide-eyed on parents' shoulders. Finally a float rumbled by: gilded, candlelit, and edging bystanders against rustic ancient walls. I looked up, and high in the sky I saw what Good Friday was all about:

An extremely Baroque Jesus lurched forward under the weight of that cruel cross, symbolically climbing to his crucifixion. Later, it occurred to me that he floated not on wheels, but on boys. Unseen and unheralded, bent under all that tradition, a team of boys had been trudging for hours through the throngs.

For the religious, it's a time of church services, prayers, and rituals. For the secular world, it means feasting, candy, games, and yes -- the Easter Bunny. But even though most of Europe celebrates, each diverse culture pays homage in its own way.

Easter begins in earnest with Holy Week, the seven days leading up to Easter Sunday. Semana Santa processions clog the streets, not just in Sevilla, but all over Spain. In Britain, Holy Week heralds the arrival of the Morris Dancers. Men in black-and-white clothes -- with straw hats, red sashes, ribbons, and bells on their ankles -- dance in the streets to chase away winter. They also chase young women, hitting them with an inflated pig bladder on a stick to summon good luck.

Easter markets in Prague sell traditional foods and crafts, including hand-painted eggs personalized with your name. From Thursday through Saturday, boys go door to door, shaking rattles to scare off the betrayer, Judas. People give them money in return. Throughout the week, girls paint eggs and boys braid pussy-willow-twig whips. On the morning after Easter, the boys go from house to house, bonking the girls with their whips to grant them good health. In return, the girls give them hand-painted eggs, and for the grown-ups, shots of alcohol. Later that afternoon, the girls splash buckets of cold water on any boys who arrive late, and vow to not speak to those who haven't shown up at all.

On Easter all over Europe, people gather in their Sunday best for the biggest church services of the year. London holds an Easter parade in Battersea Park, and ladies get decked out in fancy handmade bonnets, decorated with ribbons and flowers.

During Mass in the Duomo, a mechanical dove is sent flying from the altar along a wire. It soars out the doors and into the main square to a centuries-old, two-story, ox-drawn cart. Upon arrival it triggers a magnificent fireworks display -- like a time-release booby-trap left over from the city's Carnevale (pre-Lent) celebrations.

Greece traditionally celebrates Easter a week or two later than the West (since Eastern Orthodox churches use a different calendar).

The seaside village of Kardamyli takes its celebration very seriously: On Good Friday, a processional passes through town and the priest blesses each house. At midnight on Holy Saturday, townspeople turn off their lights and come to the main square. The priest emerges from the church with a candle and spreads light through the candle-carrying crowd, who then take the light home with them. Gradually the entire town is illuminated ... and the fireworks begin.

In France, it's not about bunnies, but bells. The Flying Bells -- having left on Good Friday to magically fly to the pope to drop off everyone's misery over the crucifixion -- return on Easter morning with joy and chocolate and eggs. Kids wake to find decorated eggs in their bedrooms and in nests they've placed outside.

Easter day culminates with a big meal, in which friends and family gather to gorge on meats and sweets. The Brits cook up ham, the Danes eat herring, and the French and Italians serve up lamb. In Greece, people sleep till noon, then rise for the big goat-on-a-spit family lunch. Rather than a big fat Greek wedding, it's a big fat Greek Easter family party.

From floats to fireworks to feasts to family, Easter is a celebration that rivals Christmas in Europe.