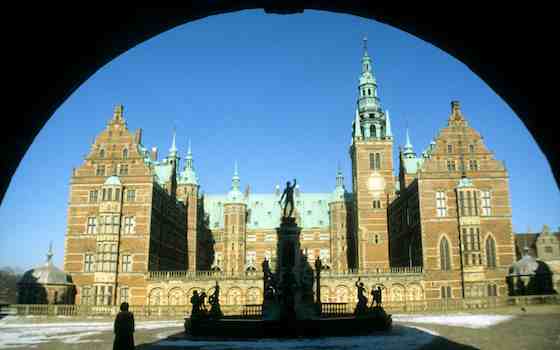 Copenhagen is a thriving metropolis and the main attraction in Denmark. But a trip here isn't complete without a swing through the cute Danish countryside. In less than two hours, you can time-travel from modern Copenhagen to a 10th-century Viking ship, 17th-century castle, or 19th-century fairy tale.

While today's Denmark is small -- roughly twice the size of Massachusetts -- at one time the Danish empire included all of Scandinavia and stretched into Germany. A reminder of all that power is the stunning Frederiksborg Castle, floating serenely on an island in the middle of a lake. An hour north of Copenhagen, Frederiksborg is considered by many to be the grandest castle in Scandinavia -- the Danish Versailles.

Built in the early 1600s, Frederiksborg was the castle of Christian IV, Denmark's greatest king. Today it houses the , filled with countless musty paintings that create a fascinating scrapbook of Danish history from 1500 until today.

Frederiksborg still gives visitors a feel for what it was like in its heyday. The suitably regal entry is ringed by a moat designed more for swans than defense. The royal apartments exude royal opulence. The Great Hall is where Christian IV threw lavish parties, with the orchestra playing from their perch above.

If you prefer Rauschenberg to royalty, a trip to the is a must. About 30 minutes north of Copenhagen, Scandinavia's most-raved-about modern-art museum is a holistic place that masterfully mixes art, architecture, and landscape. A delightful sculpture garden sprawls through the grounds, downhill toward the sea. Inside, the ever-changing collection displays post-1945 art, including Picassos, Warhols, and Hockneys. A crowd favorite is The Big Thumb, a 6-foot-tall bronze thumb by the French sculptor .

While Copenhagen is Denmark's political and cultural capital, its historic capital is located about 20 miles to the west in the town of Roskilde. Eight hundred years ago, this was the seat of Denmark's royalty and its center of power. Today, the town is famous for hosting northern Europe's biggest rock festival each July, featuring such acts as U2, David Bowie, and Bjork.

But long before Coldplay came to play, Christians came to pray. Roskilde's centerpiece is its imposing 12th-century, twin-spired cathedral. This stately old church, with fine wood carvings and a great 16th-century organ, is the resting place of 38 kings and queens.

After the Reformation gutted the church of its saints and Virgin Marys, it left a blank slate for Danish royals to fill with their tombs. The oldest tomb, from 1397, holds Queen Margrethe I, whose strong leadership and clever negotiating helped unite the three Nordic Kingdoms. Today, a spot has been restored for its next resident -- the current queen, Margrethe II, who teamed up with an artist to design her own tomb.

A short walk from the cathedral leads to Roskilde's waterfront and the excellent , highlighted by five full-size vessels. These ships were deliberately sunk a thousand years ago to block the entrance to the strategic and rich city. In 1962 they were brought up from their salty grave.

The huge, ocean-going freighter is similar to the ship Leif Eriksson took to America 1,000 years ago, though this one was likely used to carry Viking emigrants -- with their families and the entire farm -- to Iceland and later on to the New World. The skinnier, faster warship, powered by 26 oarsmen, terrorized much of Europe back when people dreaded those rampaging Norsemen.

The museum's interactive exhibits are great for kids. Craftsmen demonstrate boat-building, rope-making, woodcarving, and other traditional skills, while a replica Viking ship sails around Roskilde's harbor, giving visitors a taste of what it was like to ride in a vessel built by these fabled masters of the sea.

About an hour west of Roskilde, the industrial city of Odense is Denmark's third-largest metropolis. Tourists come here to visit the home of its famous son, Hans Christian Andersen, whom the Danes call simply H.C. ("hoe see").

Today his humble birth house stands on a cobbled lane at the corner of a museum. It displays letters from his life and times, and items belonging to this quirky genius, from his trademark top hat to the 30-foot length of rope he traveled with, just in case his hotel room caught fire and he needed to escape. A library shows Andersen's books from around the world, while headsets play some of his beloved fairy tales.

Children gather daily through the summer in the garden's storybook theater. Wide-eyed and enthralled, they're entertained by an H.C. lookalike and a cast of characters straight out of his stories. It makes for a happy ending to everyone's visit.

From daunting ships to regal castles, Denmark is a land of fairy tales. Each time I visit, it's like reading another page of a book that I don't want to end.