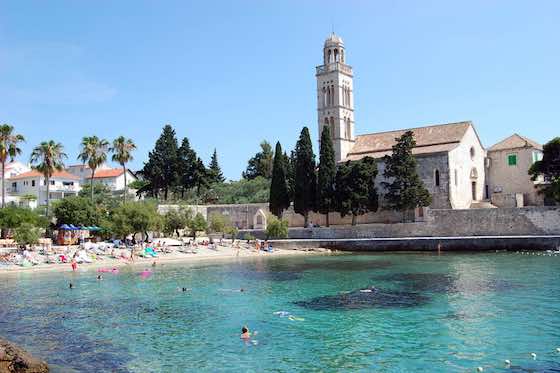 I love the knack Croatians have for taking a humble stretch of rocky shoreline and turning it into a wildly romantic bar or cafe. At Valentino Bar in the coastal town of Rovinj, the woman who runs the place hands out pillows as you arrive -- an invitation to find your own nook in the rocks overlooking the bay. As the sunset fades and the flames on the old-time candelabra seem to brighten, you realize that you don't need to be rich to enjoy a luxurious moment on the Adriatic coast.

Boasting thousands of miles of seafront and more than a thousand islands, Croatia's coastline, with its pebbly beaches, predictably balmy summer weather, and melt-in-your-mouth seafood, is Eastern Europe's Riviera. In fact, it's sometimes difficult to distinguish this lively, chaotic place from Italy.

The most Italianesque stretch is in the northern peninsula of Istria. Instead of the sheer limestone cliffs found along the rest of the Croatian shoreline, the Istrian coast has gentle green slopes, giving it a more serene feel. Though Istria has its share of tacky touristy beach towns, it also hosts my favorite Adriatic town, Rovinj.

Surrounded by the sea on three sides, Rovinj is like a little hunk of Venice draped over a hill. It's simply romantic. Boats laden with kitschy shells for sale rock giddily in the harbor. The fountain on the main square celebrates the arrival of the water system -- in 1959. A bell tower with a rickety staircase requires an enduring faith in the strength of wood. From the top a patron saint weathervane boldly faces each menacing cloud front that blows in from sea.

Walking through the market, I feel like Marilyn Monroe singing to a bunch of sex-starved GIs. Women push grappa and homemade fruit brandies on me. Their sample walnuts are curiously flavorful. Ducking away from the affluent Croatian chic on the main drag, I walk up a back street and step into a smoky bar filled with town fishermen and alcoholics (generally, it seems, one and the same).

Though Istria is quickly gaining a reputation as a hot spot, it's still not as famous as its southern rival, the Dalmatian coast, home to Croatia's top tourist town, Dubrovnik. Jutting confidently into the sea, Dubrovnik is ringed by thick medieval walls containing a traffic-free Old Town and a jumble of quiet, cobbled back lanes.

Though sun worshippers can easily find a pebbly patch along one of Dubrovnik's beaches, to truly appreciate the coast, it's best to head out to one of the islands. My two favorites are Korcula, with its "mini-Dubrovnik" vibe, and Hvar, a once-tidy fishing village with a hip, upscale-ritzy "Croatian Riviera" buzz.

The island of Hvar is known for its gentle climate, fragrant fields of lavender, and excellent wines. It's also a big draw for celebrities and yachters, making it one of the most expensive places to stay in Croatia.

Activities in the main town, also named Hvar, are low energy. The main square is a relaxing people zone surrounded by inviting cafes filled with deliriously sun-baked tourists. The formidable fortress hovering above town rewards hikers with stunning views. At the Benedictine Convent, 13 sisters (who never go outside) make lace using fibers from the cactus-like agave plant. Some yellowed samples of their work date from the late 19th century.

For a humbler and less-expensive experience, Korcula, while certainly not tourist-free, offers an often appealing, occasionally frustrating backwater charm.

Like other Croatian coastal towns, Korcula has two parts: The functional side -- where most people park, eat, and sleep -- and the time-warp old town. Four centuries of Venetian rule left Korcula with a quirky Gothic-Renaissance mix and a strong siesta tradition. The historic gate is a reminder that Korcula was once a mighty little place. Facades recall its 14th-century trading heyday, each one contributing to the evocative medieval townscape and dripping with drying laundry and local character.

Every Thursday in summer (and some Mondays), lazy Korcula snaps to life when locals perform a medieval folk dance called the Moreska. Staged at an outdoor theater, the Moreska helps Korculans remember their hard-fought past: A bad king takes the good king's bride, the dancing forces of good and evil battle, and a happy ending follows.

When visiting the Dalmatian coast, seafood is a must, as hardworking restaurants seem to abide by the local creed: Eating meat is food; eating fish, that's pleasure. One waiter reminds me that a fish should swim three times: first in the sea, then in olive oil, and finally in wine. Red wines, which Croatians actually call "black wine" (crno vino), are a specialty along the southern coast.

A fascinating land with a hard-fought history in a complex corner of Europe, Croatia is emerging as one of Europe's top destinations. Sampling the very best of Croatia, we start by exploring the fabled Dalmatian Coast from dramatic Dubrovnik to crusty Adriatic island ports. Heading inland, we hike through Plitvice Lakes National Park and enjoy the thriving capital city Zagreb. Our Croatian finale: the Istrian Peninsula and its enchanting port town of Rovinj.