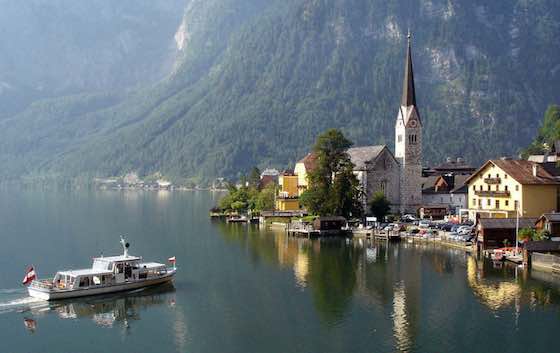 The good ship Stefanie shuttles travelers back and forth between Hallstatt's train station and the old town center.

It's rare that a town's charm will get me out of bed early. The postcard-pretty, lake-cuddling town of Hallstatt, two hours south of Salzburg, is one of those places. First thing in the morning, I head to the high end of town to look at the glassy waters of Lake Hallstatt. With the town's church spire mirrored in the tranquil water, a shuttle boat cuts through its reflection, like a knife putting a swirl in the icing on a big cake. For just a moment, it disturbs this oasis of peace.

Hallstatt is located in Austria's Salzkammergut lake district, a scenic wonder that has enthralled nature lovers for centuries. This is "Sound of Music" country -- idyllic and majestic, but not rugged, a gentle land where lakes and mountains are shuffled together like a game of 52-card pick-up.

Before there was Rome, there was Hallstatt. One of Europe's oldest towns, Hallstatt originated as a salt mining center (its name means "place of salt"). If you were to dig under some of its buildings, you'd find Roman and pre-Roman Celtic pavement stones from the ancient and prehistoric salt depot. Archaeologists claim that people have been coming here for salt since 7,000 BC (salt used to be precious because it preserved meat).

A funicular runs up the mountain to the town's salt mine, one of many throughout the region that offers tours. At the mine, visitors slip into overalls, meet their guide, and hike into the mountain to learn about the history of salt. A highlight of the visit is riding down long banisters, miner-style, from one floor to the next ... praying for no splinters.

When I first discovered Hallstatt, this was a remote community at the deepest point of a long, dead-end lake. Though tourism has trampled some of its charm, vivid cultural traditions still survive. Traditional green felt hats distinguished by jaunty decorative feathers are big in Austria. On my first trip here, when I was just a teenybopper, my dad and I each bought a hat and had a friendly competition filling it with souvenir pins and fancy feathers. Forty years later, I happened to be in town during the annual feather-in-the-hat party. Local men -- many with handlebar moustaches -- strutted around in lederhosen and their finest Tyrolean-type hats, each with a proud feather sprouting from the brim.

For centuries, the town had no road access, so people came and went by boat. You'll still see the traditional wide, flat fuhr boats, designed to carry heavy loads of salt in shallow water. On my last visit, Herr Lenz (whose wife runs a B&B I recommend) took me for a spin in his fuhr. As he lunged rhythmically on the single oar, he said, "An hour on the lake is like a day of vacation." When I asked about the oar lock, which looked like a skinny dog-chew doughnut, he said, "It's made from the gut of a bull. Not of cow, but a bull."

Facing the lake is Pension Hallberg, the home of a man who displays debris from the bottom of Lake Hallstatt. The most fascinating treasure is a trove of Nazi paraphernalia, including piles of war medallions. As I tried to sort this out, his explanation made perfect sense: When it became clear that Germany would lose World War II, those who served the Third Reich wanted to chuck any medals they had won. Lakes were the perfect trash bin.

In this town, when someone is happy to see you, they'll often say, "Can I cook you a fish?" I still remember the morning fish-selling ritual: A teenage boy rhythmically grabbed trout from the fishermen's pen and killed them one by one with a stern whack to the noggin. Another guy carried them to the tiny fishery where a guy who used to do the stern whacking gutted them. A cat waited outside the door, confident his breakfast would be a good one. Restaurateurs and homemakers lined up, waiting to buy fresh trout to feed hungry tourists or special friends.

Restaurant Braugasthof, lakeside and under a grand chestnut tree, is just the place to try some of Lake Hallstatt's prized fish. Reinanke (whitefish) is caught wild out of Lake Hallstatt and served the same day. Saibling (lake trout) is cheaper and also tasty. While you dine, you can feed the swans that patrol the lake like it's theirs, stretching greedily for every bit of bread you toss.

When I think of my favorite small-town places in Europe, they are where nature and culture mix, where each balcony has a lovingly watered, one-of-a-kind flowerbox, and where swans know just the right time to paddle by for scraps from diners at lakeside tables.

The birthplace of Mozart -- and everyone's Sound of Music fantasies -- Salzburg is a Baroque jewel of a town. It's also the springboard for lots of alpine fun -- from thrilling summer bobsledding, to idyllic boat rides in the Salzkammergut lake district, to exploring the delightful romantic town of Hallstatt.