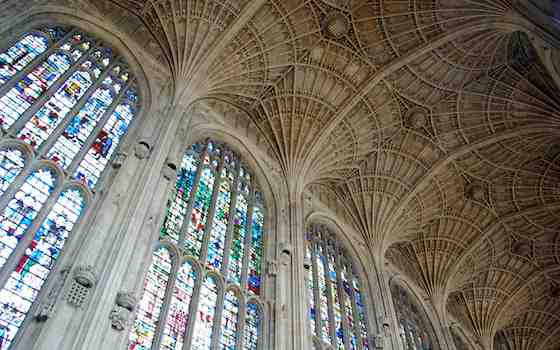 Ever since the first homework was assigned at the in 1167, the stellar graduates of British universities have influenced Western civilization. But that doesn't mean that Britain's three oldest college towns are stodgy. Although you may see professors in their traditional black robes, Cambridge, Oxford, and St. Andrews are fun, youthful towns, filled with lots of shopping, cheap eats around every corner, and rowdy, rollicking pubs.

An easy day trip from London, Cambridge is the epitome of a university town, with busy bikers, stately residence halls, plenty of bookshops, and proud locals who can point out where DNA was originally modeled, the atom first split, and electrons discovered.

The lively street in front of King's College, called King's Parade, seems to be where everyone in Cambridge gathers. Nearby you'll find King's College Chapel, England's best example of Perpendicular Gothic architecture. When it was built, it had the largest single span of vaulted roof anywhere -- 2,000 tons of incredible fan vaulting, held in place by the force of gravity.

For a little levity and probably more exercise than you really want, try renting one of the traditional flat-bottom boats called "punts" and pole yourself up and down the Cam river. Then quench your thirst at The Eagle, a pub near King's College on Benet Street. This Cambridge institution has a history so rich that a visit here practically qualifies as sightseeing. Look for the misnamed "RAF Bar," where pilots signed the ceiling while stationed here during World War II.

While Cambridge is an easygoing small town, Oxford has more of an urban feel. You can visit it as a day trip from London, or stop here on your way to the Cotswolds or Stratford-upon-Avon.

Stick to Oxford's center, and you'll get a feel for the workaday city, where knowledge is the town business -- and procrastinating over a pint is the students' main hobby. Local shops sell T-shirts that say, "Don't ask me about my thesis."

Of Oxford's colleges, is the largest and most prestigious (and, some think, most pretentious). It's also the most popular (and most expensive) for tourists to visit -- partly thanks to its historic fame, but mostly because some scenes in the "Harry Potter" movies were filmed here. Be sure to stroll under the "Bridge of Sighs," modeled after the one in Venice and built to connect the two parts of .

Take a break from Oxford's college quads at the Ashmolean Museum on Beaumont Street, which recently underwent a renovation. The vast collection features everything from antiquities to fine porcelain to Old Masters paintings to Lawrence of Arabia's ceremonial dress (www.ashmolean.org).

If you're a fan of Middle-earth and Narnia, stop by The Eagle and Child pub, a five-minute walk from the city center on St. Giles Street. It's more famous for its clientele than its very traditional food -- authors J. R. R. Tolkien and C. S. Lewis often met here.

Visitors to Scotland usually think that St. Andrews is synonymous with golf. But there's more to this charming town than its famous links; St. Andrews is the home of Scotland's most important university. Founded in 1411, it's the third-oldest in the English-speaking world -- only Oxford and Cambridge have been around longer. And it's well-connected by train and bus to Edinburgh, making it a worthwhile day trip from Scotland's capital.

Its most famous recent graduate is Prince William (class of '05). Soon after he started here, the number of female applicants to study art history -- his major -- skyrocketed. In 2001 he met another art history major named Catherine Middleton -- and the couple made their own history 10 years later when she married the heir to the British throne.

St. Andrews is enjoyably compact: You can stroll across town -- from its cathedral ruins to the historic golf course -- in about 15 minutes. The quad of -- known to students as Sally's Quad, is its heart. As most of the university's classrooms, offices, and libraries are spread out across the medieval town, this quad is the one focal point for student gatherings. If you're feeling curious, push open a few doors (some seemingly off-limits university buildings, many marked by blue doors, are actually open to the public).

There's no shortage of pubs here, but one of the most famous is inside the St. Andrews Golf Hotel. Called Ma Bells, it's a sleek but friendly place that clings to its status as one of Prince William's favorites, where he reportedly drank cider with his bodyguards.

Visit one of Britain's university towns for a heady mix of history, pubs, and youthful fun. Fortunately, you don't need to enroll to get an insiders' look.