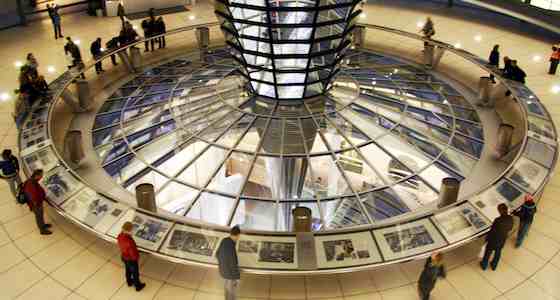 While the countries of southern Europe struggle with financial instability, those living in northern Europe are in stronger shape, thanks to their ability to produce more while consuming less. It remains to be seen to what degree they will continue to bail out their less fiscally responsible neighbors. But one thing's certain: Travelers to Germany, Switzerland, and Scandinavia will encounter their share of renovations, red tape, and reinvigorated neighborhoods and sights this year.

Berlin remains one of Europe's most exciting and affordable capitals. The city has been busy updating and expanding several communist sights, including the Berlin Wall Memorial, the , with a quirky collection of communist-era artifacts, and the new but underwhelming , featuring exhibits on East Germany's state security service.

Unfortunately, visitors to the Reichstag -- Germany's inspirational parliament building -- must now make an online reservation in advance to tour its impressive glass dome (www.bundestag.de). If it's not too crowded, you may be able to get in without a reservation, though it's unlikely.

In Munich, the Lenbachhaus, featuring early Modernist art, and the Halls of the Nibelungen at the Residenz remain closed for renovation and are projected to reopen in 2013. In Wurzburg, the opulent chapel at the Residenz is undergoing restoration and should open to visitors in mid-2012, while will be closed for renovation until the end of the year. The classy horse races near Baden-Baden have resumed, with three sessions happening in May, August, and October.

Several new walking tour offerings can help spice up your German adventure. In Rothenburg, the country's best-preserved medieval walled town, you can now do a walking-tour double feature. Start by strolling the town on the Executioner's Tour, a macabre hour with Georg Lehle costumed as a 14th-century executioner, then follow it up with the long-recommended Night Watchman's Tour, accompanied by gritty tales of old-time Rothenburg.

If you're saddled with a long wait at Frankfurt's airport, the Frankfurt Layover Tour offers a unique way to kill time. Offered by Frankfurt on Foot, the tour lasts at least three hours but can be tailored to your interests and time, and includes pick-up and drop-off at the airport.

Changes are also afoot in Switzerland, Germany's neighbor to the south. In the Swiss capital of Bern, the bears are back. Two years ago, Finn (a male from Finland) and Bjork (a female from Denmark) moved into Bern's terraced Bear Park and got busy; soon afterward they welcomed female cubs Ursina and Berna.

In Lausanne, the will be closed for renovation until late 2013. During this time, you can still enjoy the park and see the Olympic flame. A temporary floating exhibit, moored just across the street from the park, will feature a taste of the museum's collection.

Considering how hot the Mediterranean region is in the summer, vacationing in Nordic Europe has become a hit in July and August. As usual, the biggest changes are taking place in the capital cities.

In Denmark, Copenhagen's Meatpacking District, Kodbyen, is one of the city's most up-and-coming destinations for restaurants and nightlife. Located behind the main train station, the neighborhood is filled with trendy galleries and eateries that mingle with surviving offices and warehouses for the local meatpacking industry.

In Oslo, Norway, damaged buildings in the Grunerlokka neighborhood now bear a poignant tribute to the events of July 22, 2011 -- when an anti-immigration lunatic killed eight people in the city with a car bomb before shooting and killing 69 more at a summer camp. Permanent memorials will eventually be built at the sites of the tragedies.

In 2014, the Swedish capital of Stockholm will welcome a new commuter rail line that's being built beneath its main train station (until then, expect lots of construction). The city is also welcoming a new breed of tourist: fans of Stieg Larsson's punked-out computer hacker heroine, Lisbeth Salander, and jaded journalist hero, Mikael Blomkvist.

Set in Stockholm and shot here, the Hollywood version of "The Girl with the Dragon Tattoo" is making the cityscape more recognizable. Just south of the Old Town, the Sodermalm neighborhood is the primary setting of the books. It's here that fans will find Kvarnen, an old-style pub in which Lisbeth hangs out with an all-girl punk band, and the Mellqvist cafe, where the love-struck Lisbeth sees Mikael kiss his mistress. Fans can also visit the , which displays Larsson artifacts, features a reconstruction of Mikael's office at , and offers Millennium walking tours in English.

Despite a few hassles, northern Europe remains one of the easiest places to travel, whether it's a spring fling to Germany, an alpine adventure in the Swiss Alps, or a summertime swing through Scandinavia.