The Night Life of Budapest 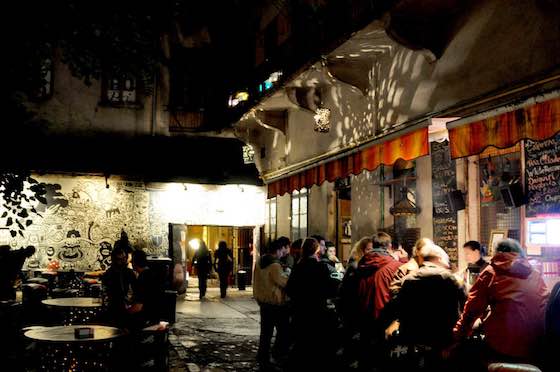 The Night Life of Budapest

Budapest, the cultural capital of Hungary and much of Central Europe, has no shortage of nightlife. You can go there for grand opera, folk music and dancing, a twilight boat trip, or live music in a nightclub.

But there's also an edgy side to Budapest evenings -- "ruin pubs" (romkocsma), which are smoke-filled, ramshackle bars crammed with twentysomethings. To find them, you'll have to explore the dingy streets of the city's Jewish Quarter. After World War II, this area was deserted and then resettled by mostly Roma (Gypsies). It remained dilapidated even after the Iron Curtain fell, and the rest of Budapest was rejuvenated.

This unusual combination of a very central location and low rents has attracted a funky new breed of bars. Their low-profile entryways look abandoned, but once you walk through a maze of hallways, you emerge into large rooms and open-air courtyards filled with people and thrift shop furniture. It feels like a gang of squatters made a trip to the dump yesterday and grabbed whatever was usable, moved in today, and are open for business tonight. Enjoying a drink here, I'm reminded of creatures that inhabit discarded shells in a tide pool.

The last time I was in Budapest, I ended up sitting with Peter (who designs ruin pubs), Laura (who works at a hotel), and Sandra (whose father's company introduced adult entertainment to Hungary in the 1990s). I told them how much I like the shabby lounge atmosphere of a ruin pub, and Laura declared that this one, Szimpla Kert (which means "Simple Garden"), is the mecca of ruin pubs in Budapest.

Sandra agreed, but was distracted when Miss Hungary walked by. With a little disdain, she said, "There's Miss Hungary -- a beauty brat with a handbag, and nobody notices her." Here, where no one's a fashion slave, not being a fashion slave creates a similar burden.

Peter bought everyone a round of spritzes (rose with soda water). He was excited about the new ruin pub across town called "Instant," and wanted us to go there. We trekked a few blocks away and found a warren of rooms and alcoves in a historic-feeling, but appropriately run-down, building. Each room was decorated differently, but always creatively -- I liked the upside-down room with furniture on the ceiling.

I commented on how well the design worked. Peter explained how these clubs are the soul of underground culture here. It's the anti-club club: flea market furniture, no matching chairs and a mishmash of colors. It's eclectic, designed to be undesigned. On hot nights, the pubs spill out into shoddy courtyards, creating the feeling of a cozy living room missing its roof ... under the stars.

I was glad that we could sit outside, since everyone seemed to smoke. Peter demonstrated the different ways you can smoke a cigarette in a counterculture enclave. First he did the affected "Beauty Queen" smoke, then the calculated "Godfather" smoke. Finally, gulping the cigarette in the middle of his lips, he did the "Working Smoker," saying, "You smoke with big lips."

Tobacco is just one part of ruin-pub ambience. These bars also come with a bit of communist kitsch. The twentysomethings that love these lounges were little kids during the last years of communism. Too young to understand its downside, they have fond memories of the good times, when the pace of life was slower, and families were tightly knit. Ruin pubs even sell nostalgic "commie" soft drinks along with the cocktails.

The nostalgia is a reaction to what happened after the Berlin Wall came down. In 1989, with the "spontaneous privatization of the society," the communists in power had the inside track and grabbed up the lion's share of the country's economic equity. Today, the former communists are the privileged capitalist class and, ironically, these former "defenders of the proletariat" are now defenders of industry and corporate interests.

As a result, young people appear to have a tea party edge to their politics. They are wary of any promises that are founded on deficit spending, and they are tired of electing politicians who tell them what they want to hear but don't follow through. Since most of them speak English, talking about politics is a great way to strike up a conversation in the ruin pubs.

The more you know Budapest, the more you like it. I love this city for its flaws as much as for its persistent personality. You'd never see a ruin pub on the Champs-Elysees, but that's the point. Thanks to the relaxed atmosphere, it's one of the easiest places in Hungary to connect with locals. That's why I like to tell people, if you're going to Budapest -- even if you're a teetotaler -- you need to experience a ruined pub.

Budapest: The Best of Hungary

We soak in elegance at the thermal Széchenyi Baths, stomp and slap with traditional dancers at a folk concert, visit the Communist All-Stars in Statue Park, remember Hungary's secret police at the House of Terror, sample some paprika in the Great Indoor Market Hall, and cruise under floodlit monuments on the Danube.