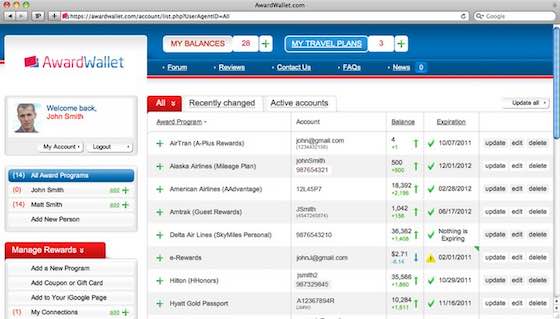 Keeping track of airline miles is a headache even for so-called "points junkies" or "mileage collectors" like Chris Guillebeau, a frequent traveler who's accrued more than a million miles and author of The Art of Non-Confortmity: Unconventional Strategies for Life, Work and Travel. Even with an Excel spreadsheet carefully tracking all of his mileage programs and expiration dates, Guillebeau admits that he'd sometimes book a flight and forget about miles he could have used.

He's since switched from a spreadsheet to an online tool called MileageManager.com, which he compares to Gmail. "Once you start using it, initially you don't really see what the big deal is," he says. "But you just put your information in once and it automatically keeps up with all your mileage and hotel programs."

Several websites offer mileage tracking, which could prevent you from letting miles expire or getting so frustrated you give up on mileage programs altogether. "Miles and points are worth money, so if you don't like losing money you should track them. But who really has the time to manage each one individually?" asks Brian Kelly, a travel consultant and blogger who writes about points at ThePointsGuys.com. "Inevitably, you never have one username across all programs."

Many of these mileage trackers will email you before your miles expire, but as Kelly points out, giving a third-party website access to your mileage and points programs shouldn't be taken lightly. "Really, anyone with a password to your frequent flyer account could use it to book a flight," he says. "Don't just sign up for any old site because you're actually giving up a lot of personal information."

That said, these tools do have practical applications for budget-savvy travelers. Here's a look at five mileage-tracking sites and their features.

Cost:Free for the regular account, and consumers can name their own price for AwardWallet Plus

Cost:Free for the first 30 days, then $49 annually (the basic TripIt features are free but do not include points tracking)

Stacy Segal, a frequent traveler and travel blogger who says she accrues between 150,000 and 200,000 miles flown per year, checks her miles and points on TripIt Pro to decide what trips she'll take and whether she needs to trade or exchange miles between accounts (which she does through Points.com). Segal likes TripIt's integration with real-time airline information and the ability to see every aspect of her trips (flight, car rental, hotel) in one place. TripIt also lets users share their itinerary with others, a feature Segal says isn't available on many other sites.

Guillebeau uses MileManager and says he likes its simplicity. Aside from tracking miles and bonus earning opportunities and notifying users in advance of mile expiration dates for selected mileage programs, MileageManager searches for flights and hotel rooms using cash or miles, and shows which programs have award ticket availability. The site also partners with TripIt, so after booking flights or hotels, users can build their itinerary using TripIt.

Milewise tracks more than 200 rewards programs and calculates the cash value of points or miles. (For instance, this writer has a little over 14,000 miles from one airline, which Milewise estimated to be worth $211 in rewards.) Like many of the other mileage tracking programs, Milewise compares real-time fare availability for the major airlines based on miles, points, or cash. It also advises the user on which options make the most sense, given the price and the user's point balance. It's also one of the newer options, since it launched in August 2011.

[See What You Need to Know About Travel Credit Cards.]

This free site tracks hotel and airline rewards programs, as well as daily deal sites like Groupon and car rental programs. Users can check bonus offers to earn more miles, and its search engine capabilities show mileage redemption options. Joel Coffey, an accountant in Seattle, uses GoMiles' expiration date tracking to "see which miles are close to expiring without having to log in to each of the individual airline websites." (He's lost miles in the past due to account inactivity.) Although he and his wife don't log thousands of miles each year, Coffey says it's still useful for casual flyers to participate in mileage programs and track their miles using a single website like GoMiles.