10 Most Unique Fountains in the World 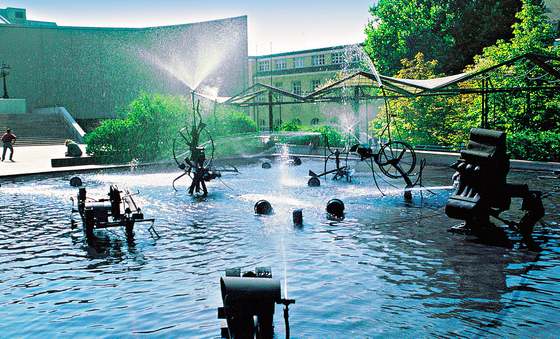 10 Most Unique Fountains in the World

Whether you prefer to sit on the edge, breathe in the mist, or dip your hands in the water, fountains have always been a people-magnet. Fountains are usually such attention grabbers because of their exquisite architecture and soothing aquatic sounds. However, we decided to turn the tables, and find some of the less "traditional" fountains in the world. With this in mind the members and editors of VirtualTourist.com have compiled this list of the most unique fountains in the world. So grab your pennies and start making some wishes!

The Tinguely Fountain is a playful mishmash of unique metal sculptures, machines, and other gizmos all moving together in a pool of water outside of the creator's museum. The fountain is a fun visual of twisted metal, sprightly spouting water in perfect aquatic harmony.

"The Aquatique Show" sounds like something you'd find in Las Vegas, but the home of the World's Tallest Indoor Fountain is actually located inside a mall in South Korea. Shooting up to 18 meters of water, this impressive fountain serenades onlookers with a spectacular display of lights and cascading water.

A common focal point for prank attacks during the UCLA-USC football rivalry, the Inverted Fountain carries a surprising and rich history. The university landmark was inspired by a challenge from former chancellor to create a fountain that did not spray water vertically into the air. The result, a 12-by-5-foot "toilet bowl-like" fountain that flushes approximately 10,000 gallons of water per minute.

Lasers, lights and computers? This is not your usual terminology when describing a fountain, but this manmade wonder is the largest of its kind in Asia. Equipped with 288 spotlights, 292 jet pumps, and a dazzling laser show this destination has quickly established itself as Macau's leading tourist magnet.

The mere sight of this fountain will literally stop you dead in your tracks. The fountain appears as a running water faucet, with no visible signs of suspension. This optical illusion exists in many different countries, but leaves the same astonished expression on people's faces. How in the world did they do that?

French-Chinese designer Chen Zhen infused an Asian-like influence into this Parisian landmark. This beautiful glass fountain depicts a robust dragon snaking through the streets of France, in a serpentine fashion. The fountain was intended to remind citizens of the waterpower supplied through the Seine River.

You can look, but don't touch! This serene picture of beauty is actually a deadly stream of liquid mercury. Built in 1937, designer Alexander Calder created the fountain to commemorate Almaden mercury miners. This fountain is currently on display at the in Barcelona.

For better, for worse; in sickness and in health; till death do us part. These vows are provocatively depicted in a grand fountain that sits atop a subway manhole. This fountain made waves with its graphic portrayal of the extreme sides of marriage. The six-sided panel ranges from a young, amorous couple lying in bed together, to an enraged wife strangling her skeletal husband.

The Bellagio Hotel is perhaps best known for its extravagant water show and fountain, however, there is an even greater gem hidden inside. A quick stroll inside the hotel will uncover a rich, smooth and luxurious fountain of dark, white and milk chocolate. This waterfall of velvety goodness is located inside of the Jean-Phillippe Patisserie. The decadent display was named the largest chocolate fountain by the "Guinness Book of World Records" in 2008.

Vacations & Travel "10 Most Unique Fountains in the World"