Your Guide to the GOP Candidates 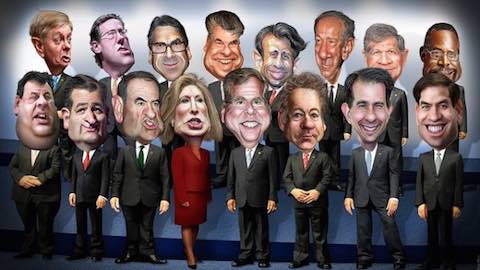 Your Guide to the GOP Candidates

Here's how to tell the 2016 GOP Candidates apart.

The Republicans have a big problem. Their presidential primary contest is beginning to resemble the New York marathon -- hordes of contestants as far as the eye can see.

How is a voter expected to choose among them, particularly since virtually all say pretty much the same thing?

To name a few examples, the entire gang of 15 or more politicians wants to cut taxes, roll back the Affordable Care Act, ban abortion, crack down on undocumented immigration, keep gun laws weak, and do nothing about global warming.

As part of my continuing effort to make the world a better place, here's a brief analysis of a few top GOP candidates. I hope it helps you tell them apart.

The former governor of Florida and latest member of the Bush dynasty angling to occupy the White House is the nice-guy conservative of the bunch.

He's no less conservative than the others, mind you -- except for the suspicion that he’s soft on immigrants because his wife grew up in Mexico -- but an iron fist in a velvet glove nevertheless. Jimmy Stewart would play him in the movie, if there were a movie and if Jimmy Stewart were still around.

The former CEO of Hewlett Packard is easily spotted since she's only woman seeking the Republican nomination.

She's a failed corporate executive who thinks she’s the perfect answer for voters who’d like to vote for a woman but can't stand Hillary. Maybe.

The senator from Kentucky passes for this gang's anti-war candidate. Even if Paul did sign that silly GOP letter that tried to sabotage nuclear talks with Iran, he's still way, way out to the left of mainstream Republicans, who are nothing if not bellicose.

Paul also has other libertarian-based ideas that make him an odd goose in this company of ducks -- especially his opposition to the NSA spying on us all.

The senator from Mars -- I mean, South Carolina -- has yet to meet an international problem that he doesn't think U.S. troops can fix. I get the feeling that he'd bomb Canada if he got the chance.

The senator from Florida is the closest thing to John F. Kennedy the Republicans have had in years.

He's young, he's good looking, and he gives a good speech. He gets a lot of mileage from how hard his parents, Cuban immigrants, had it when he was growing up. He'd be the ideal vice president for Bush if they didn't both hail from the same state.

As the only African-American contender, he's as easy to pick out in this crowd as Fiorina. He's a brilliant brain surgeon, and a rip-roaring speaker prone to saying some strange things.

As the leader of the Senate's does-not-play-well-with-others caucus, it's unclear how he would forge requisite alliances with Congress if he were elected. He sees his function as being the sand in the gears of government. People who love him, love him a lot. To the rest of us, he's Darth Vader.

The New Jersey governor is Tony Soprano on the hoof. If a blustering bully is your idea of a national leader, he's your man.

The Wisconsin governor is the one wearing a little label on his lapel that says: "If found, return to the Kochs." His viability as a candidate depends on whether he remains the billionaire brothers' favorite.

The former Arkansas governor did quite well in his failed 2008 presidential bid as the pick of the religious right, which dominates the Iowa GOP caucuses.

Remember Santorum? The former senator from Pennsylvania and father of seven kids is the biggest zealot and easily the least likable guy in the race. If he wins, expect a mass exodus to Canada.