A Woman's Review of Going Rogue by Sarah Palin 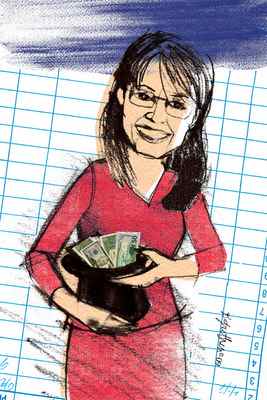 What a Wasted Opportunity: Contradictions, lack of a clear voice, and too much "Sarahcuda" bury the book's good parts

I want to like Sarah Palin. She's got a houseful of kids, she was one of the nation's few female governors, and she's not my father's . is in dire need of new leadership, and I think a conservative woman would be great. So I want to root for her.

, begins with some real gems. Growing up in a modest home in Alaska, Palin sewed her own clothes and watched NFL games a week late because the game tapes had to be flown to Alaska TV stations from the lower 48. She regularly went moose-hunting with her dad for the family dinner -- sometimes even before breakfast in the morning -- but refused to carry the moose eyeballs to school for the science class to dissect. When she ran for statewide office, she drove hundreds of miles in her Jetta, her kids in the back seat, through 10-below-zero mountain passes while drinking sugar-free Red Bulland singing along to Toby Keith's "How Do You Like Me Now?"

Palin is intriguing. And she's charming when discussing the many families of special needs kids she meets on the campaign trail, her son Track's deployment to Iraq, and the interactions she has with families of fallen soldiers during the campaign.

Palin has a great gut for connecting with all kinds of Americans, and clearly she's very good on the campaign trail.

But many parts of the book also have one contradiction after another. Sometimes they are chapters apart, sometimes pages, and sometimes even within the same paragraph. For example, her rationalization that quitting the governor's office is not actually quitting but standing up to her unnamed enemies. The circumstances surrounding Trig's birth raise many questions, and her private letter to friends explaining his Down syndrome, which she signed "Trig's Creator, Your Heavenly Father," left me, well, bewildered. And Chapter Three begins with a quotation attributed to hall of fame basketball coach John Wooden that struck me as odd because it was about "our land" that "our grandfathers paid for . . . with their lives."

Sure enough, according to published reports, the quote comes from the Cheyenne chief John Wooden Legs, not the former coach.

I'm bewildered because I'm disappointed, as I suppose a lot of women like me are. The whole book is a big letdown. That's because Sarah Palin knew that this book was highly anticipated and would be combed through by the media (the famously assigned 11 reporters to fact check it). But it has no index nor any sort of endnotes or list of sources -- the absence of which says volumes about her approach to this project. She knew that there is a double standard in politics when it comes to women, especially Republican ones. She knew she had to beat expectations. And yet she didn't seem to care.

By the time I reached the middle of the book, rooting for her was getting more difficult. There was a jarring difference between the parts that were clearly written by Palin and those parts inserted by her ghostwriter, Lynn Vincent. It's easy to pick up Palin's voice: "I stuck out like a Brownie at a Cub Scout meeting"; "Government is growing faster than fireweed in July"; "Dang! Divorce Todd? Have you seen Todd?" But when it comes to policy or her vision for the country, the prose screeches to a halt. It's clearly lifted from incomprehensible legislative boilerplate, confusing press releases, or treatises from such unlikely sources as Thomas Sowell's A Conflict of Visions. Did Palin think it wasn't important to make those passages sound as if she had written them? I'd say she talks about policy in 10 to 20 percent of the book, and when she does, it's with a thud. If she and her team had taken this as a serious opportunity to weave her ideas throughout the book, in her own voice, and give readers an idea of where she sees herself in American politics, maybe more women like me would be interested in her as a leader.

Instead, Palin talks about standing up to "entrenched interests" and "the forces of corruption" and, most often, being disgusted with the faceless, nameless "headquarters" of the McCain campaign. Her naiveté is surprising, and her distrust of the Republican establishment makes me doubt she would ever be able to unify the party as its leader. As much as I wanted her to be, she's just not thoughtful, and she's not interested in compromise or common ground in politics. There are very few shades of gray with her.

She seems to get more extreme with each page, and her vocabulary becomes more incendiary. More than once, Palin quotes her father's reaction when she quits the governor's job: "Sarah's not retreating, she's reloading!" There's lots of encouragement for readers to "fight for the people," join in the tea parties, get on , and hit the town hall meetings.

As she gets angrier, Palin seems to spin out of control, ending the book with a supporter's long E-mail that made the rounds on the Internet. The supporter admonishes "the haters" out there to watch out for "Sarahcuda": "No one ever told them what happens when you continually jab and pester a barracuda. Without warning, it will spin around and tear your face off." Why would she choose to put this in her book? That's hardly a great way to attract moderate women to her cause.

Finally, among the acknowledgments at the book's end -- right before Palin thanks God and her family -- she nods to "some media professionals whom I admire because you don't let anyone tell you to sit down and shut up, please keep making the idiots' heads spin. Thanks for not taking our Freedom of the Press for granted, you bold and patriotic, fair and balanced media folks." She lists more than 30, by their first names alone: Glenn, Jonah, Lou, Rush, and so on. It sure sounds as if she's thanking Glenn Beck, Jonah Goldberg, Lou Dobbs, and Rush Limbaugh, to name a few. And it sounds as if she's calling the rest of America "idiots."

What a wasted opportunity this book was. And really, what a disappointment for women like me.