With Poverty on the Rise, This is No Time to Slash the Safety Net 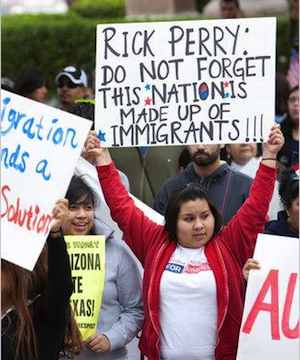 The increasingly extreme conservative ideology pervading Congress and the tea party is infused with a dogmatic creed of rugged individualism, used to justify policies that benefit only the super-rich and large corporations, while hurting -- even killing -- the rest of us.

As Sen. Bernie Sanders (I-VT) points out, living with economic hardship in this country means an early death. Rugged individualism works for those individuals lucky enough to be born with silver spoons in their mouths. For those unlucky enough to be born with a steel shovel in their hands...well, data shows they'll die about 6.5 years before their silver-spoon peers do.

Poverty, which the government defines as a family of four eking by on less than $22,113 a year, is soaring, and American children are suffering the most. In the world's wealthiest nation, the Census Bureau recently revealed that more than a quarter of our children aged 0-5 are poor. The number of people young and old in poverty grew by 2.6 million, up from 43.6 million to 46.2 million. The poverty rate is the highest it's been since 1993, and the number of people in poverty is the greatest since records began 52 years ago.

Meanwhile, as the poor get poorer, the middle class is shrinking.

Fortunately, our social safety net has kept millions more American children and adults out of poverty. Since the Great Recession began, government programs such as unemployment insurance, food stamps, and the Earned Income Tax Credit have played a critical role in keeping the poverty rate from rising even more dramatically.

Purveyors of right-wing nonsense about government spending impoverishing our children and the middle class miss the big picture. Although those lacking health insurance increased from 49 million in 2009 to 50 million in 2010, and employment-based health coverage continued to decline, children were protected from this downward trend because Medicaid and the Children's Health Insurance Program (CHIP) covered them. Additionally, President Barack Obama's health care reform act, so much maligned by the right wing, enabled the number of insured 18-24 year-olds to actually rise by half a million last year.

Obama's American Jobs Act is a good start. It shows that the White House recognizes that we need public money invested in jobs that won't just employ people, but will also fix our crumbling infrastructure. However, his calls for Congress to approve new so-called "free-trade" agreements with an anti-job track record is counter-productive.

Plus, we need a much larger-scale public effort to directly create green jobs that will quickly employ people, provide good wages and benefits, and reduce our carbon footprint at the same time. If we were to bring home the billions of dollars now being spent in devastating and costly wars overseas, we could actually pay for the significant investments that must be made at home.

We taxpayers are paying $1 million per year per U.S. soldier deployed in Afghanistan. For that same money, we could bring that soldier home, employ her in a well-paying green job for $50,000 per year, and similarly employ 19 more unemployed Americans.

There's a way out of this misery. The tea party and its ilk offer us only cold cups of bitter tea while serving up fountains of champagne to the super-rich, Wall Street, and big corporations.

Don't drink the tea. Instead, fight for a way to end our unemployment crisis and for our children to be healthy and able to participate in a thriving future.

Karen Dolan is a fellow at the Institute for Policy Studies, a community of public scholars and organizers linking peace, justice, and the environment in the U.S. and globally. www.ips-dc.org

- Originally published by Other Words

With Poverty on the Rise, This is No Time to Slash the Safety Net | Politics