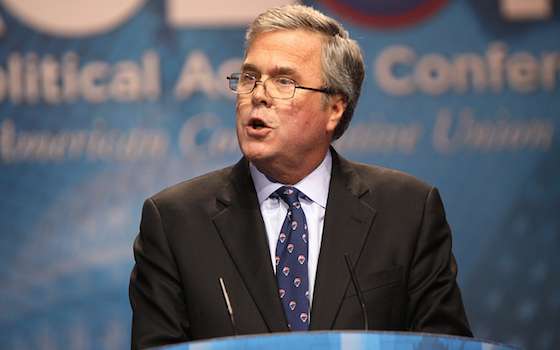 What is happening to the Nigerian girls kidnapped by Boko Haram is tragic. The sinking of the Titanic, the fall of Saigon, the British defeat at Gallipoli, the Dred Scott decision -- tragedies all. You can go on all day and all night listing terrible calamities and even lesser injustices, misfortunes and other evidence that life isn't fair. But you will probably collapse from exhaustion before you reach Jeb Bush's difficulty becoming the third President Bush.

The New Yorker cartoons write themselves. Bush, in all his blue-blazered glory, sitting next to, well, just about anyone at a bar (or standing in front of the Pearly Gates, or lying on a psychiatrist's couch, or visiting the complaints department) lamenting that he never got his turn. Or maybe he'd wear a shirt saying, "My Dad and My Brother Lived at the and All I Got Was This Lousy T-Shirt."

Of course, that's not actually all Bush got. He was a successful two-term Florida governor (a much tougher job than being governor of Texas, particularly for a Republican). He has a lovely family. He's made a bundle in the private sector, and he's a respected voice in lots of policy debates. But he hasn't checked the last and most important box on his to-do list.

And I doubt he ever will.

It's well known that Republicans tend to pick the candidate whose "turn" it is. Except for 1964 and 2000, the guy who came in second the last time or who in some way was perceived as next in line got the nomination. Barry Goldwater was a special case because of the rise of the conservative movement and the sense that JFK's assassination made LBJ unbeatable.

George W. Bush was a special case for completely different reasons. There really wasn't anyone next in line that year, but "Dubya" came the closest because the felt his dad had been robbed in 1992 by Bill Clinton (and Ross Perot).

This raises an important challenge for Jeb Bush. It should be obvious that, even among Republicans, nostalgia for George W. Bush doesn't run nearly so high as it did for his father. This is a key difference between Hillary Clinton and Jeb Bush; Democrats are nostalgic for Clinton, Republicans aren't for Bush.

But all this misses the main source of Jeb Bush's trouble. Contrary to a lot of pseudo-psychological analysis, Republicans don't go for the guy whose "turn" it is because they are hard-wired to be hierarchical and orderly. They do it because the guy who came in second last time spends the next four years wooing the conservative base.

For instance, George H.W. Bush led the moderate wing in 1980. For eight years as vice president, he courted the Reagan wing. Bush beat Robert Dole in 1988 by claiming to be the better Reaganite.

George the Younger had it a bit easier being a born-again Christian from Texas, but he didn't coast on the Bush name either.

Just ask Mitt Romney, Dole or John McCain: You don't have to win over the whole of the base, but you do need a big enough share of conservatives that when they are added to the more moderate voters already on your side, you have enough to win. (Reagan did this in reverse: He had the base largely locked up and then worked assiduously to reassure the moderates.)

And that's Jeb Bush's problem. He's antagonized the base on hot-button issues such as immigration and the Common Core curriculum, without trying to persuade anyone he's conservative enough. He even presented Clinton with an award on the eve of the first anniversary of the Benghazi attack.

Reasonable people can debate his stances, but trust me when I say the base feels decidedly unwooed.

His brother and his father understood that the is a conservative party, and they maneuvered accordingly. Jeb Bush doesn't seem to care, which is why he'll probably get the T-shirt.