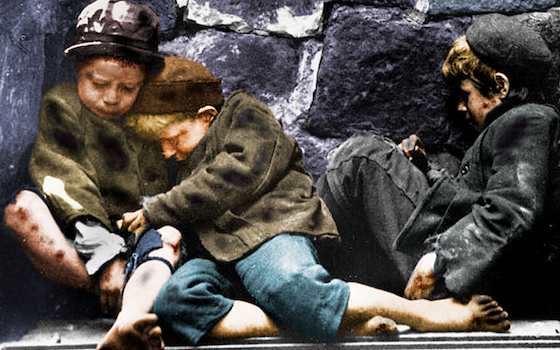 With polls showing that a majority of Americans now believe inequality has grown over the past decade, and favor tax increases on the wealthy to expand help to those in need, conservatives want to change the subject.

Those with presidential ambitions say we should focus on poverty rather than on inequality.

Sen. Marco Rubio of Florida points to the "lack of mobility" of the poor as the core problem. Rep. Paul Ryan of Wisconsin blames their isolation from mainstream America: "On every measure from education levels to marriage rates, poor families are drifting further away from the middle class."

Conservative New York Times columnist David Brooks argues that the "interrelated social problems of the poor" have nothing to do with inequality.

When almost all the gains from growth go to the top, as they have for the last 30 years, the vast middle class doesn't have the purchasing power necessary to keep the economy growing and generate lots of jobs.

Once the middle class has exhausted all its coping mechanisms -- wives and mothers surging into paid work (as they did in the 1970s and 1980s), longer working hours (which characterized the 1990s), and deep indebtedness (2002 to 2008) -- the inevitable result is slower growth and fewer jobs.

Slow growth and few jobs hit the poor especially hard because they're the first to be fired, last to be hired, and most likely to bear the brunt of declining wages and benefits.

A stressed middle class also has a harder time being generous to those in need. It's no coincidence that the tax revolts that began thundering across America in the late 1970s occurred just when middle-class wages began stagnating.

Helping America's poor presumably requires some money, but the fiscal cupboard is bare -- and the only way to replenish it is through tax increases on the wealthy because the middle class is stretched to the limit.

The shrinking middle class also hobbles upward mobility. Not only is there less money for good schools, job training and social services, but the poor face a more difficult challenge moving upward because the income ladder is far longer and its middle rungs have disappeared.

As wealth has accumulated at the top, Washington has reduced taxes on the wealthy, expanded tax loopholes that disproportionately benefit the rich, deregulated Wall Street, and provided ever larger subsidies, bailouts and tax breaks for large corporations.

The only things that have trickled down to the middle and poor besides fewer jobs and smaller paychecks are public services that are increasingly inadequate because they're starved for money.

Unequal political power is the endgame of widening inequality -- its most noxious and nefarious consequence.

Big money has all but engulfed Washington and many state capitals -- drowning out the voices of average Americans, filling the campaign chests of candidates who will do their bidding, financing attacks on organized labor, and bankrolling a vast empire of right-wing think tanks and publicists that fill the airwaves with half-truths and distortions.

Finally, conservatives would rather talk about poverty than about inequality because they can then characterize the poor as "them" -- people who are different than most of us, who have brought their problems onto themselves, who lack self-discipline or adequate motivation. Accordingly, any attempt to alleviate poverty requires that "they" change their ways.

But inequality affects all of us, and dealing with it requires that we acknowledge how distorted our economy and our politics have become. When 95 percent of the economic gains since the start of the recovery go to the richest 1 percent, something is fundamentally wrong

America's surging inequality requires that we address the growing misallocation of political and economic power in America. That's exactly what conservatives don't want us to do.