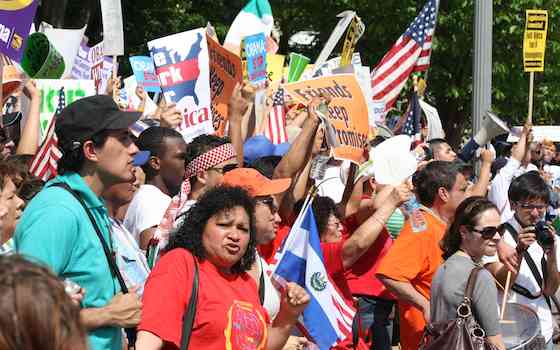 Solving the illegal immigration problem should not be hard. No one knows how many foreign nationals are residing illegally in the United States -- estimates range from 11 million to 20 million. But everyone understands that it is an untenable situation that must be addressed.

The two extreme positions of the Left and Right probably have little public support -- on the one hand, blanket amnesties and open borders, and on the other, deportation of all foreign nationals who reside here without legal authorization.

Polls show that most Americans want something in between.

Close the border. Allow entry only to those who have legal permission. Ensure that employers hire only those foreign nationals who have valid green cards. Permit those who have resided here for a while, who are without criminal records and are employed, to apply inside the U.S. for either a pathway to citizenship or legal residence.

Most would agree with those sensible reforms, but I doubt that we will see any such grand bargain. The trouble is not, as the Democratic and Republican establishments allege, because of xenophobic and nativist bigots. Only a minority now favor sending every undocumented immigrant home without a chance for the hard-working and law-abiding to stay here while they apply for citizenship.

The problem instead is that the establishments of both parties talk in high-minded fashion but in fact act selfishly. Unfortunately, identity-politics elites and activists, along with employers of undocumented workers, do not support such a grand bargain.

Why not? Because Democrats and the members of the identity-politics industry believe that they have gained millions of new constituents. The more slowly huge surges of undocumented immigrants assimilate, the more they are likely to remain bloc constituents for particular causes and politics.

Some employers have profited from employing some of the millions of inexpensive, unskilled workers without legal documentation. The desperation of millions of undocumented workers drives down costs for manual labor, both legal and not.

Other employers do not necessarily want future legal immigrants to be selected mostly on the meritocratic basis of skill sets, or for those already here to integrate quickly into American society and move beyond low-wage jobs.

Mexico is also heavily invested in the present system of unmonitored immigration that has ensured it billions of dollars annually in remittances. Millions of impoverished Mexican citizens heading northward serve as a safety valve for political disenchantment over Mexico City's reactionary policies. The Mexican expatriate population in America also seems far more supportive of Mexico when it resides far from it.

So Mexico would object vehemently if U.S. immigration enforcement were to mirror Mexico's own tough immigration laws, which demand strict border enforcement and prohibit unlawful residence or employment within Mexico.

Already we can see immigration compromises evaporating. While many conservatives are now willing to allow working foreign nationals to remain in the country while seeking legal citizenship, many liberals are against finishing the promised border fence. They do not wish to deport those who have committed a felony or a serious offense like driving under the influence. Indeed, some liberal politicians are already horse-trading to allow two or more such crimes before deportation.

They also want to grant amnesties to those who are not working and on public assistance -- despite the common assurance that all foreign nationals supposedly came to the U.S. only to work.

So far, La Raza activists and Democratic operatives do not seem eager to divorce immigration policy from ethnic considerations and preferences. They do not support the idea that all potential legal immigrants be judged equally on criteria such as job skills or education that ensure those living abroad a fair shot at immigrating and more likely a smoother transition to profitable U.S. citizenship.

Instead, "comprehensive immigration reform" is shaping up as little more than another divisive campaign opportunity in 2014 to call opponents all sorts of names rather than to seek real compromise.

Too many special interests have profited from the present mess, which is illiberal and reactionary to the core -- involving a perfect storm of inexpensive labor, ethnic-identity chauvinism, political cynicism, selective enforcement of the law, and de facto discrimination against immigrants who play by the rules.

The obstacles to reform are not bogeymen who want to deport everyone, but the disingenuous who prefer to deport no one. The culprits are not mustachioed villains who want to close the border, but the more sophisticated who want it to stay wide open. And the real reactionaries are not those seeking to make ethnicity incidental to legal immigration, but those who want to ensure that it remains absolutely essential.