What Trumpism Means for Democracy 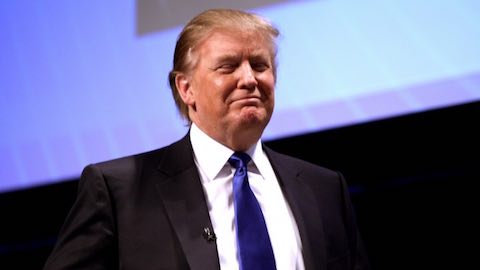 What Trumpism Means for Democracy

American democracy has been failing for decades, so a disturbing number of us are turning to authoritarianism. Is Trump our Juan Perón?

Whether or not Donald Trump ultimately succeeds in winning the White House, historians are likely to rank him as the most consequential presidential candidate of at least the past half-century.

He's already transformed the tone and temper of American political life. If he becomes the Republican nominee, he will demolish its structural underpinnings as well. Should he prevail in November, his election will alter its very fabric in ways likely to prove irreversible. Whether Trump ever delivers on his promise to "Make America Great Again," he's already transforming American democratic practice.

Trump takes obvious delight in thumbing his nose at the political establishment and flouting its norms. Yet to classify him as an "anti-establishment" figure is to miss his true significance. He is to American politics what Martin Shkreli is to Big Pharma. Each represents in exaggerated form the distilled essence of a much larger and more disturbing reality. Each embodies the smirking cynicism that has become one of the defining characteristics of our age. Each in his own way is a sign of the times.

In contrast to the universally reviled Shkreli, however, Trump has cultivated a mass following that appears impervious to his missteps, miscues, and misstatements. What Trump actually believes -- whether he believes in anything apart from big, splashy self-display -- is largely unknown and probably beside the point. Trumpism is not a program or an ideology. It's an attitude or pose that feeds off, and then reinforces, widespread anger and alienation.

The pose works because the anger -- always present in certain quarters of the American electorate but especially acute today -- is genuine. By acting the part of impish bad boy and consciously trampling on the canons of political correctness, Trump validates that anger. The more outrageous his behavior, the more secure his position at the very center of the political circus. Wondering what he will do next, we can't take our eyes off him. And to quote Marco Rubio in a different context, Trump "knows exactly what he is doing."

There is a form of genius at work here.

To an extent unmatched by any other figure in American public life, Trump understands that previous distinctions between the ostensibly serious and the self-evidently frivolous have collapsed. Back in 1968, then running for president, Richard Nixon, of all people, got things rolling when he appeared on Laugh-In and uttered the immortal words, "Sock it to me?" But no one has come close to Trump in grasping the implications of all this: In contemporary America, celebrity confers authority. Mere credentials or qualifications have become an afterthought. How else to explain the host of a "reality" TV show instantly qualifying as a serious contender for high office?

For further evidence of Trump's genius, consider the skill with which he plays the media, especially celebrity journalists who themselves specialize in smirking cynicism. Rather than pretending to take them seriously, he unmasks their preening narcissism, which mirrors his own. He refuses to acknowledge their self-assigned role as gatekeepers empowered to police the boundaries of permissible discourse. As the embodiment of "breaking news," he continues to stretch those boundaries beyond recognition.

In that regard, the spectacle of televised "debates" has offered Trump an ideal platform for promoting his cult of personality. Once a solemn, almost soporific forum for civic education -- remember Kennedy and Nixon in 1960? -- presidential debates now provide occasions for trading insults, provoking gaffes, engaging in verbal food fights, and marketing magical solutions to problems ranging from war to border security that are immune to magic. For all of that we have Trump chiefly to thank.

Trump's success as a campaigner schools his opponents, of course. In a shrinking Republican field, survival requires mimicking his antics. In that regard, Ted Cruz rates as Trump's star pupil. Cruz is to Trump what Lady Gaga was to Amy Winehouse -- a less freewheeling, more scripted, and arguably more calculating version of the original.

Yet if not a clone, Cruz taps into the same vein of pissed-off, give-me-my-country-back rage that Trump himself has so adeptly exploited. Like the master himself, Cruz has demonstrated a notable aptitude for expressing disagreement through denigration and for extravagant, crackpot promises. For his part, Marco Rubio, the only other Republican still seriously in the running, lags not far behind. When it comes to swagger and grandiosity, nothing beats a vow to create a "New American Century," thereby resurrecting a mythic past when all was ostensibly right with the world.

On two points alone do these several Republicans see eye-to-eye. The first relates to domestic policy, the second to America's role in the world.

On point one: With absolute unanimity, Trump, Cruz, and Rubio ascribe to Barack Obama any and all problems besetting the nation. To take their critique at face value, the country was doing swimmingly well back in 2009 when Obama took office. Today, it's FUBAR, due entirely to Obama's malign actions.

Wielding comparable authority, however, a Republican president can, they claim, dismantle Obama's poisonous legacy and restore all that he has destroyed. From "day one," on issues ranging from health care to immigration to the environment, the Republican candidates vow to do exactly this. With the stroke of a pen and the wave of a hand, it will be a breeze.

On point two: Ditto. Aided and abetted by Hillary Clinton, Obama has made a complete hash of things abroad. Here the list of Republican grievances is especially long. Thanks to Obama, Russia threatens Europe; North Korea is misbehaving; China is flexing its military muscles; ISIS is on the march; Iran has a clear path to acquiring nuclear weapons; and perhaps most distressingly of all, Benjamin Netanyahu, the prime minister of Israel, is unhappy with U.S. policy.

Here, too, the Republican candidates see eye-to-eye and have solutions readily at hand. In one way or another, all of those solutions relate to military power. Trump, Cruz, and Rubio are unabashed militarists. (So, too, is Hillary Clinton, but that's an issue deserving an essay of its own). Their gripe with Obama is that he never put American military might fully to work, a defect they vow to amend. A Republican commander-in-chief, be it Trump, Cruz, or Rubio, won't take any guff from Moscow or Pyongyang or Beijing or Tehran. He will eradicate "radical Islamic terrorism," put the mullahs back in their box, torture a bunch of terrorists in the bargain, and give Bibi whatever he wants.

In addition to offering Obama a sort of backhanded tribute -- so much damage wrought by just one man in so little time -- the Republican critique reinforces reigning theories of presidential omnipotence. Just as an incompetent or ill-motivated chief executive can screw everything up, so too can a bold and skillful one set things right.

Juan and Evita in Washington?

The ratio between promises made and promises fulfilled by every president in recent memory -- Obama included -- should have demolished such theories long ago. But no such luck. Fantasies of a great president saving the day still persist, something that Trump, Cruz, and Rubio have all made the centerpiece of their campaigns. Elect me, each asserts. I alone can save the Republic.

Here, however, Trump may enjoy an edge over his competitors, including Hillary Clinton and Bernie Sanders. With Americans assigning to their presidents the attributes of demigods -- each and every one memorialized before death with a library-shrine -- who better to fill the role than an egomaniacal tycoon who already acts the part? The times call for strong leadership. Who better to provide it than a wheeler-dealer unbothered by the rules that constrain mere mortals?

What then lies ahead?

If Trump secures the Republican nomination, now an increasingly imaginable prospect, the party is likely to implode. Whatever rump organization survives will have forfeited any remaining claim to represent principled conservatism.

None of this will matter to Trump, however. He's no conservative, and Trumpism requires no party. Even if some new institutional alternative to conventional liberalism eventually emerges, the two-party system that has long defined the landscape of American politics will be gone for good.

Should Trump or a Trump mini-me ultimately succeed in capturing the presidency, a possibility that can no longer be dismissed out of hand, the effects will be even more profound. In all but name, the United States will cease to be a constitutional republic. Once President Trump inevitably declares that he alone expresses the popular will, Americans will find that they have traded the rule of law for a version of caudillismo. Trump's Washington could come to resemble Buenos Aires in the days of Juan Perón, with Melania a suitably glamorous stand-in for Evita, and plebiscites suitably glamorous stand-ins for elections.

That a considerable number of Americans appear to welcome this prospect may seem inexplicable. Yet reason enough exists for their disenchantment. American democracy has been decaying for decades. The people know that they are no longer truly sovereign. They know that the apparatus of power, both public and private, does not promote the common good, itself a concept that has become obsolete. They have had their fill of irresponsibility, lack of accountability, incompetence, and the bad times that increasingly seem to go with them.

So in disturbingly large numbers they have turned to Trump to strip bare the body politic, willing to take a chance that he will come up with something that, if not better, will at least be more entertaining. As Argentines and others who have trusted their fate to demagogues have discovered, such expectations are doomed to disappointment.

In the meantime, just imagine how the Donald J. Trump Presidential Library, no doubt taller than all the others put together, might one day glitter and glisten -- perhaps with casino attached.

"What Trumpism Means for Democracy"