What Aristotle Teaches Us About Trump's Rhetoric 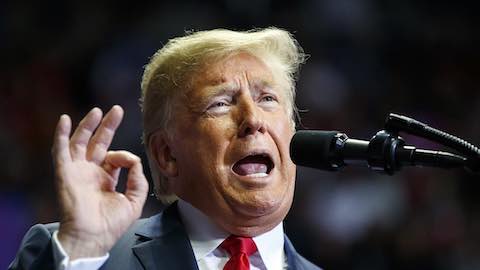 Trump appeals to his base in a way that Aristotle and other philosophers knew was effective thousands of years ago.

From Franklin D. Roosevelt's fireside chats to Ronald Reagan's reputation as the "great communicator" to Barack Obama's soaring oratory to Donald Trump's Twitter use, styles of presidential communication have varied over time.

But what is similar across all presidents is their ability to create persuasive messages that resonate with large segments of the U.S. population.

Whatever your opinion about Donald Trump, he is highly effective at doing this. The question is why, and how does he do it?

As someone who teaches rhetoric and communication, I am interested in how people connect with an audience and why a message resonates with one audience but falls flat with another. Whether intentional or not, Trump is using rhetorical strategies that have been around for more than 2,000 years.

What makes something persuasive?

There have been many definitions of rhetoric over the past two millennia, but at its most basic level it is the practice and study of persuasive communication. It was first developed in ancient Greece, and arose from the need for people to defend themselves in law courts -- a brand new invention at the time.

One of the world's most influential thinkers in this regard was the ancient Greek philosopher Aristotle, who lived from 384 to 322 B.C.

Aristotle was a student of Plato and the teacher of Alexander the Great. He wrote about philosophy, poetry, music, biology, zoology, economics and other topics. He also famously wrote about rhetoric and came up with an elaborate and detailed system for understanding both what is persuasive and how to create persuasive messages.

To Aristotle, there were three main elements that all work together to create a persuasive message: a person's use of logic and reasoning, their credibility and their use of emotional appeals.

Aristotle wished that everyone could be persuaded with detailed logical arguments -- what he called "logos." However, that approach is often tedious, and, frankly, Aristotle felt most people weren't smart enough to understand them anyway. Facts, documents, reasoning, data and so forth are all important, but those alone won't win the day. So, he claimed, we need two other things -- and this is where Trump excels: credibility and emotion.

Aristotle argues that someone's credibility -- or "ethos" -- is one of the elements that people find most persuasive.

However, he also said credibility is not a universal trait or feature. For example, a degree from Princeton gives you credibility only to someone else who has heard of Princeton, understands its cultural cachet and respects what it represents. The Princeton degree itself doesn't give you credibility; it's the perception of the degree by someone else that's important.

Aristotle also said that an important feature of credibility is to appear to have the audience's best interest in mind by sharing and affirming their desires and prejudices, and understanding and amplifying their cultural values. In politics, the person who does the best job of this will get your vote.

So when Trump states that climate change is a hoax or that the "news media is the enemy of the American people," what makes that effective for certain audiences has nothing to do with the truthfulness of those statements.

Instead, it's because he's channeling and then reflecting the values and grievances of his audience back to them. The closer he gets to hitting the sweet spot of that specific audience, the more they like him and find him credible.

Very often, politicians "evolve" or "pivot" from a position that has earned them intense loyalty from a small group to a position they think will resonate with a larger group in order to get more supporters. This works for some people. But that's not Trump's strategy.

Instead, he goes all-in with his core supporters, establishing stronger bonds and identifying more closely with that group than someone with a more moderate message would. This also creates extremes on both sides: passionate supporters and intense detractors.

President Trump the communicator, then, has a laser focus on one particular segment of the population. He doesn't mind if you don't agree with him because he's not talking to you anyway. His strategy is to continue nurturing his credibility with core supporters.

Peppering your credibility with emotional appeals -- what Aristotle calls "pathos" -- is particularly effective. As Aristotle once wrote, "The hearer always sympathizes with one who speaks emotionally, even though he really says nothing."

Anger, for example, is an emotion that a speaker can provoke in an audience by using real or perceived slights. In Book 2 of his "On Rhetoric," Aristotle writes that anger is an "impulse, accompanied by pain, to a conspicuous revenge for a conspicuous slight." He details how an audience will channel their "great resentment" and revel in the "pleasure" of their expectation of "revenge" against those who have wronged them.

In another passage, he writes, "people who are afflicted by sickness or poverty or love or thirst or any other unsatisfied desires are prone to anger and easily roused: especially against those who slight their present distress."

Using slights to channel and rouse anger is a near daily strategy that Trump has used against the FBI, the news media, the Mueller investigation and other perceived enemies.

Anger over the slighting of one's "present distress" also helps explain why, for example, Hillary Clinton's "basket of deplorables" comment was such a rallying cry for Republicans. They didn't like being dissed.

A speaker's style of language is also important. Trump is very effective with this, too.

Aristotle recommended that a speaker should first identify feelings that their audience already holds, and then use vivid language that resonates with that specific audience to intensify those emotions. Trump has repeatedly put this tactic to work, particularly at his rallies.

For example, Trump regularly invokes a familiar adversary, Hillary Clinton, at his rallies. By drawing on his audience's known animosity toward her and encouraging them in the "lock her up" chant, calling for her to be jailed and describing her election night loss as "her funeral," he is using an aggressive style of language that reflects and heightens the preexisting emotions of his audience.

The downside is that the more he uses language that is strongly incompatible with other groups, the more they dislike him. But that seems to be something Trump embraces, which only gives him even more credibility with his supporters.

Whether this approach is a smart electoral strategy in the future remains to be seen.

Photo: President Donald Trump speaks at a rally in Indiana.

"What Aristotle Teaches Us About Trump's Rhetoric"