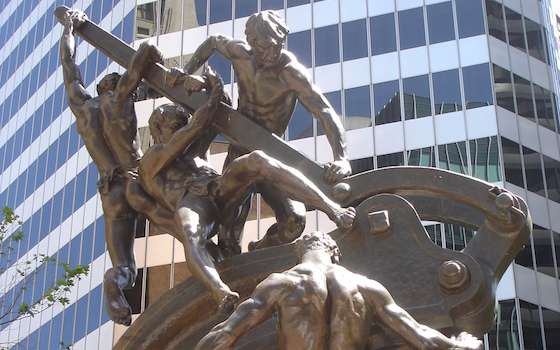 Despite the comforting myth that we're all in this together, disagreement over what constitutes a fair share in the nation's economic pie continues to flourish in both Democratic and Republican administrations.

The Democrats cast the so-called class war as the rich oppressing the poor, the 1 percent against the 99 percent, the haves vs. the have-nots, and so on. The Republicans portray it as the takers against the makers, the welfare society bleeding the opportunity society, the labor unions vs. the job-creators, and so on.

The argument rages today in the debate over income inequality. The Democrats have latched onto it with a vengeance, in light of soaring stock profits and a broadened billionaire class. The Republicans defend the economic status quo as the fulfillment of the American ideal of the just rewards of the free enterprise system.

Class warfare is front and center now in the current dispute over raising the federal minimum hourly wage, now at . The Democrats contend it is hardly a "livable" wage in today's high-price economy. They advocate a boost to , which the Republicans argue would be a job killer, obliging employers to reduce their work forces to save their enterprises.

Into the debate has come the nonpartisan Congressional Budget Office, calculating that the minimum-wage increase advocated by the Obama administration would increase the earnings of 16.5 million Americans, but at the cost of an estimated half a million jobs. Talk about giving with one hand and taking away with the other.

Consequently, the CBO as a referee in the fight, or an ally to one side or the other, is about as helpful as a scale with a thumb on it. The CBO report put it this way:

"The large majority (of low-wage workers) would have higher wages and family income, but a much smaller group would be jobless and have much lower family income."

The report did say, however, the proposed raise would lift about 900,000 Americans out of poverty, as calculated by the government. The administration, not surprisingly, pushed back against the downside of the higher minimum wage.

In any event, the Democrats' focus on income inequality is central to the party's hopes for gains in the approaching November congressional elections, which may determine Obama's chances of achieving any substantial legislative progress in his final two years in office.

The Republicans have already made it abundantly clear they are relying on public disfavor toward his embattled health-care insurance law to hold or increase their hold of the House, and gain control of the . Killing Obamacare will continue to be their midterm election battle cry until then.

Public opinion polling lends solid support for the administration view, with two-thirds of voters surveyed in the /ABC News Poll favoring the higher minimum wage. Nevertheless, employers as a group have insisted that the very slow growth of the economy under Obama justifies uncertainty about resuming job hiring on any truly substantial scale.

Although the national unemployment rate has dropped from 10 percent to 6 percent under Obama, many employers have delayed hiring back former employees or adding new ones, taking advantage of higher productivity from their reduced work forces. Meanwhile, corporate executive salaries and bonuses have climbed, as stockholders have been the beneficiaries of a booming Wall Street.

All this has fueled anew the class warfare argument on both sides. The Democrats lament the widening gap in income inequality between the rich and poor, and between the struggling middle class and the new wealthy class. The Republicans simultaneously voice the old warning of spreading socialism and government bureaucracy, financed by higher taxation and crippling federal debt.

More than a century after the Gilded Age of railroad and other industrial trusts, of robber barons and sweatshops, the notion of social classes and the clash goes on, if on a much more humane and "civilized" basis. The difference is that politics has become the weapon of choice as the class warfare continues by this other name.