War Between Science and Religion Far From Inevitable 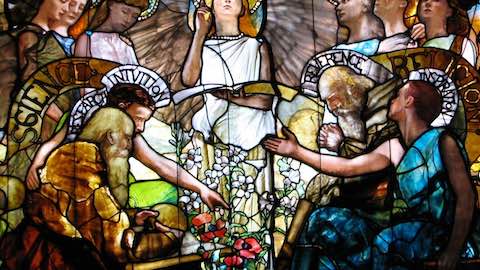 Religion has helped science, as well as hindered it.

[ Related: The War Between Science & Religion ]

In his book Faith Versus Fact: Why Science and Religion Are Incompatible

, the biologist and polemicist Jerry Coyne launched one of his many attacks on religion in the name of science: science and religion, he wrote, are "incompatible in precisely the same way and in the same sense that rationality is incompatible with irrationality". These sorts of generalities have been quite common down the years, often reinforced by references to the condemnation of Galileo by the Roman Catholic Church in 1633 or the altercation in Oxford in 1860 between T H Huxley and bishop Samuel Wilberforce over evolution.

These sorts of statement can also have repercussions in public life. On September 16 2008, Professor Michael Reiss, an evolutionary biologist, resigned as director of education for the Royal Society. What brought about his removal were observations he'd made about how science teachers should treat questions about origins in schools. He is reported to have said: "Creationism is best seen by scientists not as a misconception, but as a world view."

Shortly before Reiss turned in his resignation, the Nobel Prize winner Sir Richard Roberts had written to the president of the Royal Society, Sir Martin Rees, demanding "that Professor Reiss step down, or be asked to step down, as soon as possible". "We gather Professor Reiss is a clergyman, which in itself is very worrisome," the letter went on:

Who on earth thought that he would be an appropriate Director of Education, who could be expected to answer questions about the differences between science and religion in a scientific, reasoned way?

Commenting on the whole episode in the New Scientist, Sir Harold Kroto, another Nobel laureate, observed:

There is no way that an ordained minister -- for whom unverified dogma must represent a major, if not the major, pillar in their lives -- can present free-thinking, doubt-based scientific philosophy honestly or disinterestedly.

There are many sciences, many religions. A scientific innovation problematic for one religious tradition may be irrelevant to another. One science may pose a threat to religious beliefs when other sciences do not. Arguing for an essential conflict between science and religion fails because, as the philosopher John Gray has written, terms such as "religion" and "atheism" have no essence.

The sciences may sometimes provide answers to questions once asked within the faith traditions -- but they also leave space for religious enquiry and commitment. How do we prioritise competing scientific research projects? With limited resources we must ask what is more important for humankind. But these are not scientific questions -- as the historian Noah Yuval Harari identifies in his best-seller Sapiens, only religions and ideologies seek to answer them: "Scientific research can flourish only in alliance with some religion or ideology."

Because science and religion can complement one another as well as come into conflict, the story of their interrelations is complex.

Looking back over history, we certainly find many occasions when science and religion have been in conflict. Call these flash points. Among these is the rejection of miracles by those convinced that nature is bound by unbreakable natural laws. Or the denial of human freedom by those who see the human mind as nothing more than the workings of brain chemistry.

In the early 17th century some Catholics found new theories of matter disturbing because of the challenges they posed to their understanding of the Eucharist. For some Jews, the ban on astrology between 200AD and 500AD stifled astronomical inquiry. For biblical literalists, Darwinian evolution routinely provokes an oppositional stance.

On the other hand, we can identify many points of conciliation and enrichment. Think of these as trading zones. Take the biblical idea that all humankind is descended from a single source. This belief inspired the search for the beginnings of human language and for the routes by which early humans diffused across the globe.

In the 17th century, scientific instruments such as the telescope and microscope were conceived as ways of reversing the effects of Adam's fall from grace. Scientific methods and instruments were devised as a means for ameliorating the damage to human cognitive powers and sensory apparatus believed to have been brought about by human sinfulness.

Or consider the whole matter of design in the world. This idea was fundamental to the development of the science of ecology. Key early works of natural history which stressed the intimate connections between organisms and their environments were motivated in good part by a belief that God had fitted animals and plants to the environmental regimes in which they were located.

In our own day, there may well be benefits to be derived from a dialogue between theological anthropology and those advocating transhumanism. New technological possibilities are raising profound questions about what it means to be human, a subject on which theologians have had much to say. At the very least, theology might prove to be a useful conversational partner in articulating values by which to adjudicate among the human capacities that might be prioritised for enhancement.

The survival of religion

With their different sources of authority, the potential for tension, divergence, even animosity between representatives of scientific and religious communities will always be there. But tension, divergence, animosity -- even conflict -- are not the same as inevitable warfare. Many religious people have been indifferent to science. Many scientists have experienced alienation from religion. Mutual suspicion is not uncommon. But, again, indifference, alienation and suspicion are not the same as warfare.

The very words "science" and "religion" have undergone profound changes of meaning. Not until the second half of the 19th century did "science" become a convenient umbrella to capture an expanding range of specialised empirical enquiries, supposedly -- but not always actually -- united by a common "scientific method".

Can religions survive in technological societies? They already have -- and for an important reason. They confer identity and seek to find meaning in events, to interpret the universe, not primarily to explain it. As Terry Eagleton memorably put it: "The blunder of believing that religion is a botched attempt to explain the world ... is like seeing ballet as a botched attempt to run for a bus."

[ Related: The War Between Science & Religion ]

"War Between Science and Religion Far From Inevitable"