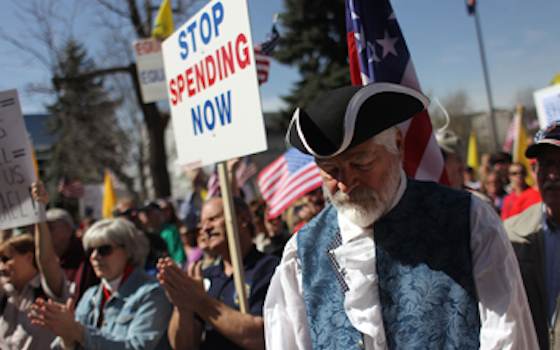 What on earth is wrong with the United States? Why can't it get its act together? Why has the world's only superpower suddenly become ungovernable?

After hopeless political deadlock, endless budget crises, and increasingly vitriolic rhetoric accross all sides of a political chasm, America's friends and enemies are asking these questions with increasing urgency.

At the root of America's difficulties is a cultural and political unravelling that makes trust and compromize seem impossible. A major contributor to the problem is the country's economic woes. The middle class is shrinking and, for the first time in generations, many Americans are downwardly mobile. Worse still, the economic collapse of the middle and lower classes has been coupled with an economic boom for the rich. It is hard to maintain political cohesion in the face of deep economic anxiety and huge and growing inequality.

Liberal elites -- full disclosure: I am a card-carrying member -- are well within their comfort zone when talking about economics. They are less ready to discuss the cultural divide that separates Americans from each other. Many older Americans hardly recognize the country they now live in. This is an America with an African-American president who won re-election despite opposition from a large majority of white men. It is an America where gay marriage is widely accepted, where Spanish is often spoken and where most children are born out of wedlock. members and their allies wrap themselves in the rhetoric of patriotism, but a deep irony resides at the base of this self-presentation. The country the loves is an imagined land that existed in the past. Its members hate what America has actually become.

It is easy for the liberal elite to dismiss these complaints as bigoted, stupid, and reactionary. Nor do I mean to defend them. I'm proud to say that I love what America has become. That said, though, it is a big mistake to ridicule or ignore the views of those who feel left behind. For better or worse, we share a country with these people, and, so, we have to understand what drives them and speak to their concerns.

So what is to be done? Before we can address the problem of economic justice we must tackle the distrust and misunderstanding that currently makes any serious government undertaking impossible. Doing that requires something that elites are not very good at: taking seriously and at face value the cultural commitments of ordinary Americans.

When elites are not laughing at these commitments, they are 'explaining' them with half-baked sociology. People do not like to be laughed at, condescended toward, or studied. Whether we agree with them or not, we need to respect the concerns, beliefs and world views of people who are not 'us'.

Does this mean that liberals need to give in on core principles such as gay rights, gender equality, and reproductive freedom? No, but it does mean giving in on something. Here are two areas where liberal elites might show some flexibility.

First, we might abandon the effort to regulate gun use and possession. Don't get me wrong: I hate guns. But America is not about to get rid of guns. The kind of gun control that might actually make a difference is politically impractical, and the kind that liberal elites argue for accomplishes nothing other than reinforcing the widespread belief that these elites have nothing in common with ordinary folks.

Second, we might end the concerted liberal attack on evangelical Christianity in general and creationism in particular. My own view is that creationists are wrong, but fundamentalist Christians nonetheless have a point when they complain that students in public schools are taught a kind of orthodoxy when they are exposed only to Darwin and to the methods of science. And whether they have a point or not, we can hardly expect religious conservatives to serve as loyal allies in our struggle for economic change when we ridicule their core commitments.

President Obama could demonstrate leadership in re-establishing the respect and trust we need, but the effort to end the ridicule and condescension cannot just come just from leaders.

What is required is a broader commitment to the tolerance and multiculturalism that liberals embrace with regard to their favourite minority groups but reject when it comes to their political opponents.

It will not be easy for liberals to change these attitudes. But if we are to have any hope of re-establishing the lost sense that we share a common country -- that we are all Americans and must work together for the common good -- we must do these things or things like them.

Of course, the hope may be misplaced. Perhaps offers of good faith, understanding and tolerance will be met only with demands for complete surrender. Perhaps the country really has become ungovernable. But before we reach these grim conclusions, liberals need to make the effort to treat our fellow citizens with the respect and dignity that they rightfully expect.

Without taking this risk, there is no prospect at all that we can engender the willingness to trust and sacrifice that will be necessary if we are to respond as a united country to the huge problems that lie ahead.