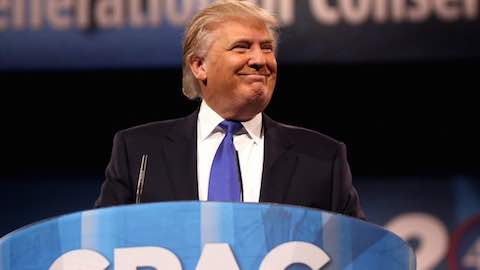 If elected, a President Trump will quickly realize that the foreign policy establishment he loves to criticize has not done a bad job on striking deals.

No stranger to controversy, Donald Trump has made a number of polemical remarks in his candidacy for the Republican nomination for the 2016 American presidential election. Consequently, many foreign policy experts in the United States and elsewhere worry that, as President, Trump would embrace isolationism or aggressive nationalism, thereby repudiating such long-standing liberal internationalist principles that have characterized American foreign policy since the end of the Second World War. Such principles have included the embrace of multilateralism through economic and security institutions as well as a preference for such global values as capitalism and democracy. One analyst argues that a Trump foreign policy doctrine encompasses several principles: a muscular defense posture, a reluctance to engage in military intervention abroad when core interests are not at stake, and, perhaps most importantly, a major reallocation of the defense burden to American allies.

Trump's foreign policy views correspond with those policy analysts and observers who hold three related beliefs about US alliances. The first belief is that alliances have become ends unto themselves. That is, the United States values its alliances for their own sake and thus disregards the costs that they incur with respect to American security and prosperity. The second belief is that such overvaluation has encouraged American allies to engage in undesirable behaviors, namely, that American allies are failing to do their part in sharing the defense burden in a proportional and just manner. Allies have successfully hoodwinked the United States into accepting this unfair bargain. These beliefs culminate in the third: that the United States has become dangerously overextended as a result of its alliances. Commitments exceed capabilities, thus rendering the United States susceptible to Chinese and Russian subterfuge and provocations.

Each of these beliefs have some merit, but the worries that they embody are either misplaced or so old as to invite skepticism. I consider each belief in turn.

Alliances as Ends Rather than Means

To explain why states create and sustain alliances, one popular international relations theory emphasizes that states seek to aggregate military capabilities in the face of a shared adversary. Alliances are thus a means to deter threats. Trump has articulated the view—shared somewhat by several prominent realists in the academy—that in the post-Cold War era alliances no longer have such usefulness for the United States even though "we should not abandon Europe completely." He appears to believe that these alliances have persisted in large part because of a misplaced sense of attachment to them. Consider Europe. The Soviet Union was the raison d'être for NATO, but it no longer exists. Taking its place is a Russia whose cooperation is desirable even if it comes at the expense of smaller countries in East Central Europe. As such, NATO—especially an expanded one that includes former members of the Soviet bloc—places undesirable limits on American freedom of action. In East Asia, American loyalty to South Korea and Japan has also obscured the costs associated with those alliances. Realists like Stephen Walt have made similar pronouncements, claiming that the American desire to uphold credibility for its own sake has fostered various alliance pathologies. Briefly put, alliances have become ends onto themselves.

Yet alliances do serve distinct ends and they have been so successful in procuring those benefits that it has become easy to forget them. To begin with, alliances help manage local security dilemmas that may arise when states are uncertain of the intentions of others and so acquire weapons to mitigate their sense of threat. Unfortunately, these security dilemmas intensify when states find themselves in an arms race that results not from malign intentions per se but distrust. Alliances curb these dynamics because an ally might forgo the development of particular weapons that could unnerve its adversary. As such, alliances can remove incentives for nuclear proliferation, especially if the ally would otherwise have to confront a much more powerful adversary on its own. Nevertheless, it would be wrong to claim that alliances neuter allies. They still have to acquire a meaningful military capability so that it can fight alongside its guarantor in a war. In this way, alliances also serve to enhance military interoperability if deterrence fails and war breaks out. Non-military benefits also accrue to America's global military posture: alliances help maintain open markets and trade links in addition to ensuring some level of influence in the defense and foreign policies of states.

A corollary to the first belief is that American alliance loyalty encourages a set of bad behaviors on the part of allies. In particular, Trump has criticized American allies for 'free-riding' on their received security commitments by contributing less than their fair share to the common defense burden. Relatedly, the costs of upholding its security commitments have become unacceptably high for the United States. Still, the notion that American allies free ride is almost as old as the alliances themselves. President Dwight Eisenhower made similar complaints about Western Europe in the 1950s. And indeed, Trump is not alone in articulating this belief in the present. Even President Barack Obama has made similar allegations this year. Some credence to these claims appears to exist. Many NATO countries spend less than 2% of their GDP on their militaries—the benchmark established by the alliance in 2006.

It is true that some American allies could invest more in meeting their own defense needs, but the broader point remains overstated. For one, as Andrew Moravcsik recently wrote with respect to Europe, American security commitments are much less expensive than is commonly presumed. Western European countries have also contributed to common security interests through alternative channels, such as foreign aid and market access. Europe has also borne the brunt of the costs incurred from the sanctions imposed on Iran and Russia. For another, as I argued in Survival in 2015, countries that face acute security threats do arm themselves because they cannot rely entirely on the security guarantees that they receive. After all, some probability exists that the United States could disavow its commitments so as to avoid the costs of war. Most East Central European countries have raised their military budgets in light of Russian behavior in Ukraine and elsewhere. In East Asia, South Korea spends more than 2% of its GDP to support one of the largest and most capable standing armies in the world. Finally, that some allies underinvest in their own defense is a legacy of bargains struck in the Cold War. The United States wanted (West) Germany and Japan to spend money on their militaries, but not too much money (and certainly not on offensive capabilities or nuclear weapons). After all, American decision-makers had reasonable fears about resurgent militarism in those countries as well as the security dilemmas that could intensify in their regions.

Describing the foregoing two beliefs leads us to consider the third and most important one: that American commitments outmatch American capabilities. Such overextension might not matter in a peaceful world. However, adversaries like China and Russia could exploit American overextension by engaging in subversion, military modernization efforts, and other provocations so as to make American commitments seem unreliable or unbelievable. The policy implication is clear: the United States must scale back its commitments so that they are brought in line with American capabilities. Certain alliances should be downgraded or reoriented, if not abrogated.

Two points are in order. The first—like that of free riding allies—is that this belief is not new. Indeed, it has been a recurring theme in American foreign policy since the early days of the Cold War. The Eisenhower administration introduced the concept of Massive Retaliation—the idea that communist aggression would be met with overwhelming nuclear force—in part because it believed (sensibly) that the United States could not fight or deter on the basis of its conventional military power alone. At this time, American decision-makers even mooted sharing nuclear weapons in order to close the commitment-capability gap. These concerns would not go away. President Richard Nixon engaged in nuclear brinkmanship (e.g., the madman theory) because he believed that nuclear parity could empower the Soviet Union and other adversaries to press their claims against American interests and commitments. The second point is that the United States is very capable, despite contrary claims that the Obama administration has enervated the American military. As Daryl Press and Keir Lieber note, in the post-Cold War era, American nuclear forces have become so superior over Chinese and Russian nuclear forces as to have potentially a first-strike capability. American conventional military power is also impressive. Mauro and Andrea Gilli find that certain weapons-platforms (e.g., drones) possessed by the United States have become so advanced that adversaries face significant technical barriers in copying or developing them. Though the difficulties confronted in Iraq and Afghanistan have been a sobering reminder of the limits of American power, those experiences should not obscure the relative strength of American military capabilities today.

I offer these rejoinders not to invite complacency and self-satisfaction with the present state of affairs, but to remind us that certain anxieties about America's global presence are exaggerated. These anxieties resonate in the American body politic so as to allow Trump to gain political traction. Unfortunately, foreign policy elites have not properly communicated to members of the wider public the merits and worthwhileness of American alliance commitments.

One hypothesis I would put forward to explain this lack of messaging is that it actually suits American policy elites that they are not too forthcoming about some of their foreign policy successes. After all, the United States will always desire greater foreign policy investments from its partners around the world. Accordingly, even in a world where every NATO member spends two percent of its GDP on defense, the United States will probably find other reasons to claim that they are not doing enough. Greater alliance contributions not only help distribute the burden more justly, whatever that means, but also legitimate American foreign policy endeavors. Indeed, it is partly for this reason that the United States has had to cajole its friends and allies with gifts so that they join its coalitions. Such legitimation could be useful for generating support from two audiences: members of the American domestic public who need to be assured that their leaders are not pursuing their parochial interests; and other states within the international system who might similarly need to be convinced of the goodness of American intentions. The notion that allies are already doing enough (in light of their own constraints) would complicate such efforts.

Trump regularly congratulates himself for his deal making, pledging that if elected President he would extract better and more favorable bargains from American allies. Though I caution against a Panglossian view of American alliances—that we are in the best of all possible worlds—I would still argue that Trump will quickly realize that the foreign policy establishment he loves to criticize has not done a bad job striking deals.