Trump and the Iran Nuclear Deal 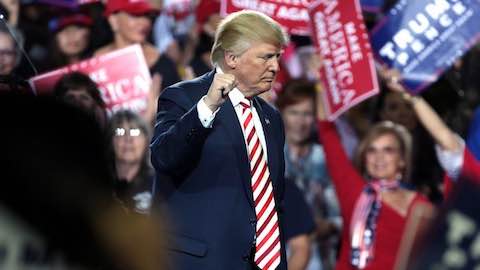 Trump and the Iran Nuclear Deal (Gage Skidmore via Flickr)

If Trump scraps the Iran nuclear agreement, his administration may push Iran into using ISIS in a tactical way against American interests in the Middle East.

Although Trump is short on specifics, and sometimes sends contradictory and confusing messages, he is widely expected to discontinue the Iran policy of the Obama administration. He made his dislike of the Joint Comprehensive Plan of Action (JCPOA) and some of his picks share this view. For instance, Mike Pompeo, the presumptive CIA Director, tweeted that he looks forward to "rolling back this disastrous deal." Michael Flynn, the would-be National Security Advisor has opposed the agreement in the past. Congress, which already passed a ten-year extension of the Iran Sanctions Act (ISA) vows to introduce more sanction-related bills, which would target the missile industry, among others. The president-elect is expected to sign the legislation into law; his administration would discourage international banks from underwriting Foreign Direct Investment (FDI) which Iran desperately needs to revitalize the economy devastated by years of mismanagement and sanctions.

Unsurprisingly, these developments have intensified the power struggle in Tehran. The political system in Iran, known as the negotiated political order, is based on a series of complex arrangements among elites whose power base is anchored either in the state or parastatal domains. As a rule, the president and the state bureaucracy compete with the parastatal Revolutionary Guards, its "civilian" branch, the Basij, and the large revolutionary foundations. With the presidential election scheduled for May 2017, the battle has become increasingly intense.

The government of President Hassan Rouhani has insisted that the decision to sign the deal for sanction relief in exchange for rolling back its nuclear program, was a sound one. But his administration is hard pressed to explain the new American sanctions, and government officials admitted that the pressure on international banks has made it hard to attract FDI. Indeed, desperate to retain the presidency, Rouhani, and his Foreign Minister Mohammad Javad Zarif, urged Federica Mogherini, the EU foreign policy chief, to convene a commission meeting on JCPOA implementation. The Iranians contend that the extension of the ISA is a violation of the nuclear deal.

For their part, the opponents of the JCPOA plan to turn the deal into a major election issue. Known as the Principalist, a hard-liner coalition of followers of Mahmoud Ahmadinejad, key elements in the Guards and the Basji assert that Rouhani was tricked into the deal by the "treacherous America." Javad Karimi Ghoddousi, a hardline member of the Majlis National Security and Foreign Policy Committee distributed notes from a meeting between Zarif and members of the committee. According to Ghoddousi, the Foreign Minster admitted that he was naïve to trust the U.S. Secretary of State, who had assured him that Congress would let the ISA expire and that the United States would not impede international financing. Zarif and government spokesmen vehemently denied that such a conversation took place, but the incident is a preview of the election strategy. Should the Trump administration and Congress hollow out the sanction relief promised by the JCPOA, Rouhani can lose the presidential ballot.

Although Ayatollah Ali Khamenei barred Mahmoud Ahmadinejad from running again, a Principalist coalition under any of the rumored contenders, including Saeed Jalili or Mohammad-Bagher Ghalibaf, could have far reaching consequences. The Revolutionary Guards and the Ministry of Defense's Field of Expansion of Deployment of Advanced Technology (FEDAT), which are in charge of the nuclear program can retaliate by blocking the Safeguards Division of the International Atomic Energy Agency (IAEA) from inspecting certain sites. Mohsen Fakhrizadeh, a Brigadier General in the Revolutionary Guards and the director of the FEDAT and Fereydoon Abbasi-Davani, the chief of Ahmadinejad's Atomic Energy Organization of Iran, who bitterly opposed the JCPOA, may try the so-called "sneak out" strategy. In other words, Iran may institute a clandestine enrichment uranium without renouncing membership in the Non-Proliferation Treaty. Also, as part of the "sneak out" strategy, the Guards may revive the so-called Possible Military Dimension efforts, the IAEA terminology for weaponization tests. Fakhrizadeh and the Revolutionary Guards may even do it without the tacit support of Khamenei.

This would not be the first time that elements of the Revolutionary Guards went behind the back of the government. For example, when Ayatollah Khomeini decreed that the Koran was not compatible with weapons of mass destruction, the Guards, and key leaders of his regime such as Ayatollah Akbar Hashemi Rafsanjani revived the Shahs' nuclear program in 1981. Tellingly, by the time that Khomeini, under intense pressure from Revolutionary Guard commanders, lifted his fatwa against the bomb in 1985, the infrastructure for the nuclear project had already been laid.

It is highly interesting in this context that the Guards have recently urged to develop naval nuclear propulsion for ships and submarines. They demanded the same technology in 2012, but the idea makes little sense in terms of the needs of the navy. Iran is far behind the major powers in submarine technology and nuclear submarines will represent an extreme expense for the country. It is even more significant that Rouhani, desperate to retain power, had come out in favor of the proposal.

The JCPOA has paved the way for a tacit cooperation between Tehran and Washington in countering the Islamic State of Iraq and Syria (ISIS) terror group. While the Iranians have mostly supported the Iraqi militia forces, the US air campaign and training has focused on backing the regular Iraqi army and the Kurdish Peshmerga to fight against the terror group.

Although ISIS had suffered a string of defeats lately, it is still a force to be reckoned with. If the incoming administration is serious in eradicating ISIS, a promise which Trump repeatedly made, Washington needs to assure at least a modicum of good will from Tehran. A vengeful, hardline government in Tehran could use ISIS in a tactical way against American interests. Again, it would not be the first time that the Revolutionary Guards had forged a tactical alliance with a sworn enemy. The 9/11 Commission Report concluded that the Guards had sheltered senior member of Al Qaeda, including one of Osama bin Laden's sons and his family who fled the American forces in Afghanistan. Despite repeated request from Washington the regime refused to extradite the members of the group. Worse, American intelligence assumed that some Iranian- based al Qaeda terrorist acted as regime proxies in attacks against Americans. It would be hardly inconceivable for the Quds Force, the foreign operations branch of the Guards to employ ISIS in a similar capacity.

The Quds Force can also further destabilize some of the host spots in the region, including Iraq, Yemen, Lebanon, and the Palestinian territory. For example, Brigadier General Mohamed Ali Al Falaki, a retired Guards commander, recently announced the creation of the Shite Liberation Army which would "liberate Israel" in twenty-three years. Critics in Washington have complained that Iran has become more aggressive after the JCPOA. They have also pointed out that the Revolutionary Guards have used some of "JCPOA dividend" for financing terrorism. There is undoubtedly some truth to this claim, as John Kerry had admitted some time ago. That parastatals like the Guards would replenish their coffers in the post-sanctions era is, of course, part of the negotiated political order. But, having joined the Terrorist Financing Convention (TFC), Rouhani made the Guards' financial dealings more difficult. Consequently, large banks like Bank Sepah and Bank Melli, once the hub of the Guards financial empire, have now liquidated these accounts.

Behind the scenes, the Rouhani government has also acted to curb some potentially highly destabilizing actions attributed to the Guards or the Basji, now headed by Gholamhossein Gharib Parvar, an extremist who used highly brutal methods to put down the Green Movement protest in 2009. In one pivotal case, after a Basji- inspired mob attacked the Saudi embassy in Tehran in retaliation for execution of the prominent Shite cleric Nimr Baqir al-Nimr, the administration rushed to calm the tensions with Riyadh. Although the diplomatic relations between the two countries remain suspended, the Quds Force provocation have been apparently curbed.

Given the grim implications of any of the above scenarios, the Trump administration should accept the JCPOA and help Rouhani win a second term. Pushing Iran may please the critics of the JCPOA, including the Republicans in Congress, Israel, and its lobby in Washington, but it will not serve Washington's interests in the region.

Dr. Farhad Rezaei is a senior research fellow at Center for Iranian Studies (IRAM) in Ankara where his research focuses on Iran's foreign policy. He is the author of Iran's Nuclear Program: A Study in Proliferation and Rollback (New York: Palgrave Macmillan, 2016). His writings have appeared in The National Interest, Middle East Policy, British Journal of Middle Eastern Studies and Asian Affairs among others. He tweets at @Farhadrezaeii